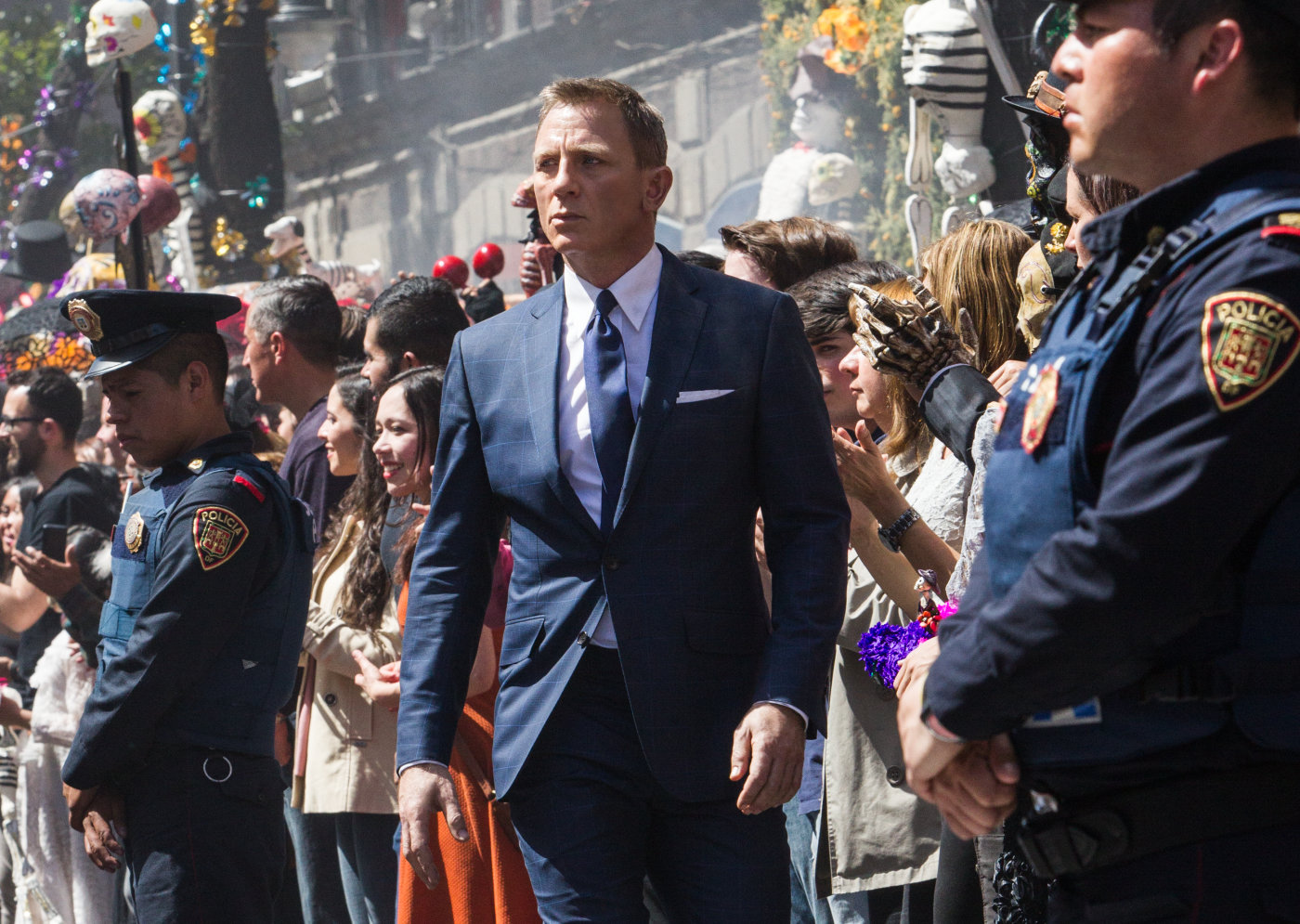 The James Bond franchise’s body count is nearly incalculable, yet death has never pervaded a Bond film the way it does Spectre. As if to make sure no one misses the point, the film begins in Mexico City during Dia de los Muertos. Citizens dressed as skeletons and looming parade floats of dancing bones set the tone before 007 (Daniel Craig) botches an assassination and blows up half a city block. Bond always leaves chaos in his wake, but rarely has one of these films acknowledged the sheer horror of his impact as when the spy emerges unscathed from the rubble of a building, stumbles past wounded and fleeing civilians, and promptly chases after his target with single-minded intent. Watching the sequence, which culminates with Bond almost crashing a helicopter into the Zócalo just to kill one man, it’s hard not to think of the disgust that Craig himself unabashedly feels for the brutish icon.

The film’s critical view of Bond can be seen throughout in the cinematography of Hoyte van Hoytema, who replaces Roger Deakins’s starkly lit, bleak images from Skyfall with his trademark bleary haze. Prior franchise entries call attention to the opulence of Bond’s travel destinations and the historical splendor that matches the character’s suave personality. In van Hoytema’s hands, though, the vast sets feel drained of life. Cold whites provide a baseline palette, but the cinematographer adds to that a thick, brown fog that fills every inch of negative space in decrepit interiors of tarnished gold and faded mahogany, a suffocating dust cloud that signals death and obsolescence. Naturally, these images connect back to Bond, who only seems at home when shuffling through such areas in a state of torpor.

It’s been exactly 20 years since Judi Dench arrived as a revisionist M in Goldeneye to dismiss 007 as “a sexist, misogynist dinosaur, a relic of the Cold War,” yet the series has consistently taken pains to reaffirm the virility and competence of its hero. Here, however, Bond is introduced disguised in a skeleton costume, a literal walking fossil whose outdated methods soon come under fire for their destructiveness and inefficacy. This sets up a dubiously resolved conflict between Bond’s old-school, personal brand of espionage and the modern world of total surveillance espoused by the new head of M15, C (Andrew Scott). As in Christopher Nolan’s Batman films, this central debate is only half-resolved, trapped in an ambiguous spot where unchecked surveillance is condemned except when exceptional men wield it.

More successful is how the film castigates its hero’s personal failures. The screenplay doubles down on Skyfall’s view of Bond as a broken child hardened into a thug, a straightforward observation that nonetheless gives the character much-needed flexibility and perspective. This especially plays out in the foregrounding of Bond’s legendarily horrible treatment of women. The Craig era has put women in more prominent roles, from Eva Green’s complex Vesper Lynd to Judi Dench’s beefed-up role as a mirthless, pitiless M. The women Bond loved and lost haunt him to such an extent that Spectre could have referred to their lingering presences as much as the franchise’s classic terrorist organization. Dench even appears as a digital ghost, leaving Bond instructions from beyond the grave to prompt his latest mission. Craig’s hero may be a violent ape, but he’s also deeply traumatized, and his interactions with the widow, Lucia (Monica Bellucci), of a man he killed, and Madeleine (Léa Seydoux), a woman who can help him track down Spectre, betray a self-conscious, balancing tenderness.

All of this revisionism centrally incorporates the history of the franchise, and the film both excels and suffers for frequently recalling its forbears. On the plus side, it’s gratifying to see characters like Q (Ben Whishaw) and Moneypenny (Naomie Harris) retain their fundamental traits while getting more active roles. Less satisfying is how, say, a fight on a train so blatantly recalls From Russia with Love that the fisticuffs between Bond, Madeleine, and the film’s main heavy, Hinx (Dave Bautista, muscles forever about to burst out of his suits), start to feel more like homage than original action. Only an idiot could fail to guess the true identity of Christoph Waltz’s shadowy mastermind, but the belated reveal of his name is muted by the villain’s personal connection to Bond, a hackneyed cliché of screenwriting that simplifies the character instead of adding new dimensions.

The film’s inventive highs and frustrating lows are epitomized in the climax, which initially thrusts Bond into a demented funhouse made out of the old MI6 headquarters. This sequence, in which Bond is teased and spooked by gun-range targets with his face and holding cells containing photos of those who blood is on his hands, may be the most legitimately unsettling moment in this 24-film series. But then the whole thing ends with a ludicrous shootout with a helicopter that embraces the cheesiest elements of the franchise in a way that runs counter to Sam Mendes’s dour directorial tone.

There’s much to admire about Spectre, from its symbolically sickly aesthetic to its clearly shot action sequences. Even its attempt to provide Bond with a redemptive arc is, on its face, laudable. Both Casino Royale and Skyfall ended with the hero enduring such tragedy that he was forced to recommit to his job because he felt life had nothing else to offer him, and the suggestion that he might actually be able to break that cycle provides the franchise with its first sense of closure in its five-decade history. Were this the final installment in the series, it would mark a fitting end for a violent but compelling icon, but the resolution of the ending is undone by Mendes having to leave things open for the next person to come and thrust James right back into work.