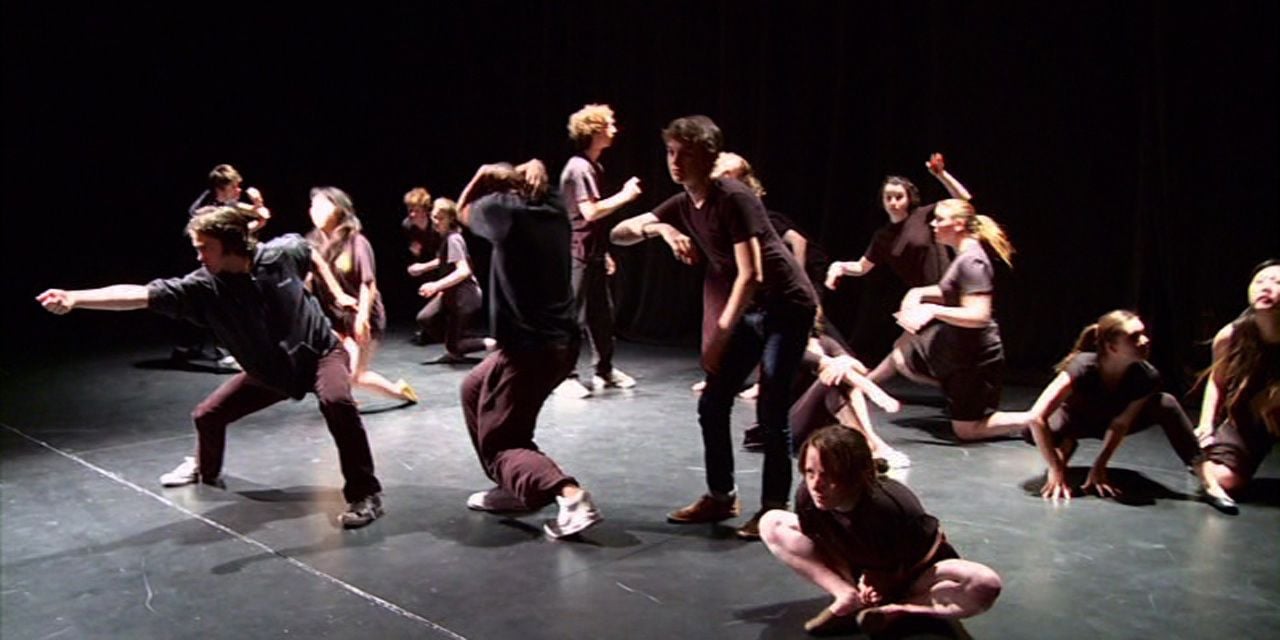 Shakespeare High, a documentary about the 90th year of the Drama Teachers Association of Southern California Shakespeare Festival held in the L.A. area, at first seems like an overly long PSA about saving the arts and their funding in high schools across Southern California. The main thread of the film follows promising young actors doing their damnedest to make old Bill Shakespeare their own, with uplifting and heartfelt cameos by the likes of Kevin Spacey, Val Kilmer, and Mare Winningham sprinkled in for good measure. “Look at what the arts did for me! Your child could be the next Richard Dreyfuss!” these iconic—and a little past their prime, no?—stars seem to be saying in so many unspoken words. In one scene, Spacey reminisces about a time when there was an overabundance of funding for drama programs across the region, and they didn’t know what to do with the money, while wandering through the halls of his very own alma mater, Chattsworth High. Not so any more though. Which, as annoying as all this sounds, isn’t so bad because the kids in the Shakespeare competition, the heroes in this fun documentary, come from even more humble backgrounds than Kilmer and have buckets upon buckets of talent.

These SoCal kids are passionate about their craft and it shows in their renditions of the famous bard’s work. Essentially, the Drama Teachers Association chooses three of Shakespeare’s most popular plays and then it’s up to the high schools participating to field a team of actors for each play. Then it’s up to the students on each team to either condense the play into a six- or seven-minute romp—SNL meets the 16th century!—or just choose a scene from a play to repeat verbatim; there are no rules per se, and the students have full artistic license (there were quite a few teams that relied on beat boxing in iambic pentameter) to change or modify the plays as they see fit. The only parameters that must be strictly adhered to are that there can be no costumes or sets; each group gets the use of four auditorium folding chairs and a minuscule stage. Needless to say, the creativity that these students exhibit is incredible and one can’t help but wish that this type of Shakespeare interpretation happened more often. (The programmers over at BAM might take some notes.)

The stories behind the kids and their lives add a nice layer of complexity to an otherwise lighthearted film, but also borders on the overly dramatic at times. Not surprisingly, the drama teachers cry a lot, and the shortsightedness of high school being the end-all, be-all summation of a life, the glory days, gets a little tedious. There will be life after Shakespeare Festival! Most of these kids don’t realize that their time in high school is just tiny blip in their many years to come.

Either way, this whole premise was just made for the documentary film genre. Every kid has a true underdog story to tell. There’s a young Latino kid nicknamed TACO (for Taking All Chongos Out), a former gang banger who knows his way around a gun, who finds a new way to take control as a student director. There’s red-headed Sam Sterns, whose father and mother are former neo-Nazis and who is animated and hilarious like a fresh-faced Jim Carey. There’s Tosh Hall, who grew up in the Bloods and only just made it out alive, but has the personality and charm of a seasoned comedic star. And then there’s Melvin and Galvin Emesibe, identical football-playing twins, whose father is in jail for murdering their mother and their grandmother in a blind rage while they were sleeping in their house. The twins have acquired football scholarships but were recruited to the festival by their fellow students because, duh, you need a couple of big black guys if you’re going to do Othello right. The athletes meet the challenge of the stage head-on like a pass rush and are unstoppable. And there are plenty of more stories where these came from. Suffice it to say, these kids have seen some shit (at least more than Mr. Spacey did), and yet, through Shakespeare’s timeless poetry, they’ve found ways to channel whatever demons they face and do something amazing and positive with their time.

What’s interesting is that a few moments are spent with a couple of Shakespeare purists toward the end of the film, who are more than a little perplexed at the modernization and situational comedy style of some of the renderings from the students. They even find it mildly offensive and hyper-violent. This isn’t the way the bard intended his works to be played. Similarly, some of the judges seem to feel the same way and take away points for too much goofiness. But they seem to be missing the point. It’s the fact that the kids are even interested in the great poetry of the Globe Theater and wonderful stories that Shakespeare offers in the first place that is the important idea here, not how well they adhere or don’t adhere to the script. No matter what they do with the play, they have to read the entirety of it in the orignal text first, and understand what they’re reading, before they can make their adaptation. Getting a high school kid’s attention is half the battle. And perhaps there truly is no dramatic substitute for a well-practiced and chilling performance of King Lear by seasoned veterans, but as the kids in Shakespeare High prove again and again, doing it their way seems like a hell of lot more fun.

Review: The Colors of the Mountain