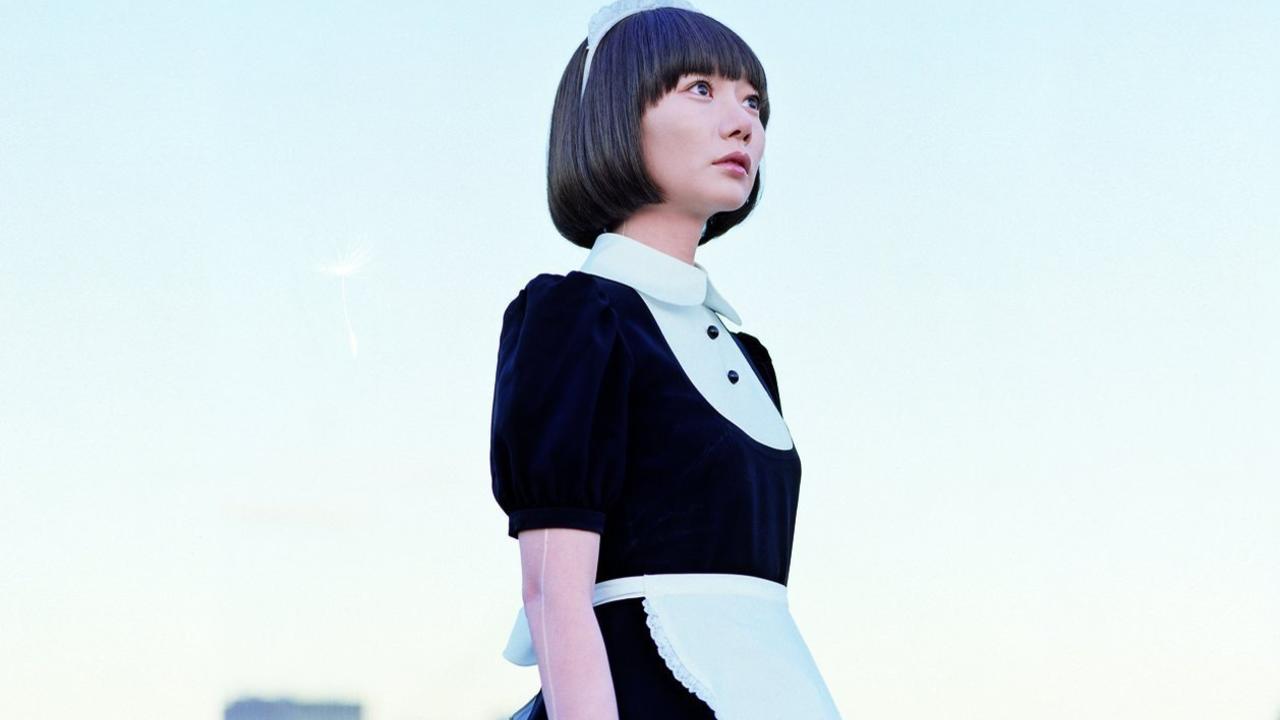 A sex-toy Pinocchio? Offenbach’s Olympia as an inflatable courtesan? If only. Writer-director Kore-eda Hirokazu squanders a perfectly good smutty-joke setup in Air Doll, an off-key fable that, despite a recurring appearance by the eponymous heroine’s detachable rubber cooch, arguably boasts the festival’s highest quotient of saccharine.

The liminal states of Kore-eda’s earlier works—death and memory in 1998’s After Life, dissolving childhood in 2004’s Nobody Knows—here become fairy-tale tinsel as a blowup doll miraculously goes from middle-aged bachelor’s sexual receptacle to moony pixie (Bae Du-na). Decked out in a French maid outfit, she pokes around Tokyo, delighting in the beauty that forlorn humans have apparently become blind to, learning about referencing other movies at a video store, and realizing that “having a heart was heartbreaking.”

Taking a page from Gus Van Sant’s morbid, lyrical teenage wastelands, Esmir Filho’s debut feature, The Famous and the Dead, walks a thin line between brooding impressionism and emo-neurasthenia. “Being close isn’t physical,” types the protagonist (Henrique Larre), an aspiring poet and YouTube collagist who, feeling in Bob Dylan’s scratchiness an antidote to his morose provincial life, identifies himself solely by his chatroom handle “Mr. Tambourine Man.” A Laura Palmeresque waif and an enigmatically skulking dude also figure in the downcast hamlet, which seems to slowly spiral toward the suicide-magnet vortex of the local bridge.

The setting may be the wintry valleys of Brazil’s southeast rather than Rio’s overheated slums, yet Filho’s coming-of-age arc—youngsters negotiating doubt, despair and death within an insular community—carries unmistakable echoes of the favela-chic social commentary of Fernando Meirelles’s City of God and Sérgio Machado’s Lower City. Instead of juicing up spurious gangland bathos, however, the film stays intimately attuned to its main character’s disaffected psyche, infused with aural dissonance, fascinated by swirls of video abstraction, and haunted by MySpace alienation. The melancholy is memorable, but the question remains whether Filho can find something behind the mood besides more mood.

If Edith Piaf was French culture’s galvanic “Little Sparrow,” then Serge Gainsbourg was its insouciant toucan, with cigarettes and lascivious lyrics perpetually dangling from its beak. As with Olivier Dahan’s La Vie en Rose, first-time director Joann Sfar’s Gainsbourg (Vie Héroïque), a biopic of the often scandalous Gallic crooner, is a welter of rise-and-fall clichés with a full-bodied impersonation at the center, namely Eric Elmosnino’s resourceful evocation of the star’s hepcat impudence and hangdog salaciousness.

The trajectory follows Gainsbourg from cheeky, homely Jewish kid in Nazi-occupied Paris to jazz-soaked ‘60s provocateur to boorish burnout, lubricated by a greatest-hits wall of yé-yé, rock, reggae, and electronic new wave. Adapting his own graphic-novel telling of the star’s life, Sfar scrambles to gussy up the worn showbiz structure with visual puns, fantasy interludes, and an insinuating, pointy-nosed id figure straight out of Guillermo del Toro’s Pan’s Labyrinth. Despite such spirited turns as Laetitia Casta’s Brigitte Bardot, Ana Mouglalis’s Juliet Greco, and the late Lucy Gordon’s Jane Birkin, however, nothing in the film is as illuminating of Gainsbourg’s stubbly-satyr persona as his mid-‘80s appearance on a French talk show, in which he slurringly declared his desire to fuck a young Whitney Houston.

Scarcely slowing down since its Wolf Creek second wind, Australian horror continues to mate grue and giggles in the sardonic blood tide that is The Loved Ones, which has already been aptly described as an unholy amalgam of John Hughes and Eli Roth. Brent (Xavier Samuel) is a glum teenager who, traumatized by his father’s recent death, politely turns down Lola’s (Robin McLeavy, in a ferocious debut) shy invitation to the school dance. Big mistake.

Suffice to say that Brent quickly finds himself whisked away to a sadistically improvised dinner at the nerdette’s backwater abode, where she unveils sugary prom-night fantasies along with a lengthy history of grisly dates. The Texas Chainsaw Massacre and Pretty in Pink might be the twin totems here, but the strange blend of heightened adolescent fragility and gore is director Sean Byrne’s own private cauldron. Nifty touch: The disco ball that keeps swirling inanely above the screen’s assorted stabbings, carvings, and drillings.

Of the festival’s various the-children-are-watching-us dramas (among them The Father of My Children and The Man Who Will Come), My Queen Karo is a child’s-view account of the tail’s end of the counterculture may be the most humane and fluid. Drawing on autobiographical experiences, writer-director Dorothée Van Den Berghe vividly and sensitively charts the excitement and confusion of 10-year-old Karo (Anna Franziska Jaeger) as she and her parents (Déborah François and Matthias Schoenaerts) ditch their Belgian home to experiment with flower-power freedoms in a squatters’ commune in 1974 Amsterdam.

Protests and group-gropes follow, though it’s not long before the father’s extramarital romps (“We came here to be free,” his increasingly distressed wife is told) reveal the cracks in the group’s freewheeling utopian surface. Attuned to the thorny adult feelings around her, Karo nevertheless floats in a bubble of prepubescent discovery, seizing the camera’s vantage for an immersive ride on a swing set or finding solace in the blue expanses of a swimming pool. Taking its tone from the young heroine’s burgeoning awareness of her clashing emotions, the film is a keen and fond crisscross of people caught in sexual, social, and familial transition.

A New York-born creator of deadpan French anecdotes, writer-director Eugène Green enhances his subject-for-further-research status with The Portuguese Nun by traveling to Lisbon and mimicking a Manoel de Oliveira picture. The plot follows the filming of a 17th-century religious text in Portugal’s capital, where a forlorn young actress (Leonor Baldaque) dons her character’s severe habit, gawks in wonder at the city’s architecture, listens to fado performances, and weaves in and out of the lives of a lovestruck actor and a fatherless boy.

To add to the meta affair, Green himself appears on screen as the project’s idiosyncratic director, murmuring “action” and “cut” before hitting the disco floor at night. “The film is… unconventional,” the heroine at one point declares, to a civilian’s curt retort: “Boring, you mean.” Not quite. Green’s formalism—gratuitous chapter headings, repetition of images, frontal Ozu shots, tableaux composed like ads for good posture—is more successful than his inquiries into spiritual rootlessness, but his subtle humor disarms.

Chain-smoking and espresso-sipping his way through a tour of Brazil to talk about his book on transcendental meditation, David Lynch exudes a beguilingly extraterrestrial aura—part swami, part Jimmy Stewart, part Vulcan high priest in Transcending Lynch. In between events, he gazes out the car window and drawls, “I love tunnels. They have such mood”; during a Q&A session later on, he patiently listens to a fan’s cumbersome interpretation of a scene from Lynch’s Mulholland Drive before smilingly refusing to confirm it.

Such grace notes prove to be the most rewarding passages of Marco Andrade’s slim documentary, which, despite misguided attempts to recreate the great director’s textures (a shot of guitar-toting Donovan silhouetted in a phosphorescent corridor is an easy low point), misses the contrast between the man’s inner serenity and the furious surrealism of his work. But leave it to Lynch himself to fortuitously offer the picture’s best description of the power of his films when, asked about the sensation of transcendental meditation, he likens it to the frightening elation of being in an elevator whose cord has just been severed.

Screenings of Luchino Visconti’s Senso and Satyajit Ray’s The Music Room graced this year’s festival, yet the most bracing blast from the past came from Wake in Fright, a long-unavailable 1971 Australian scorcher by the auteur of, um, First Blood and Weekend at Bernie’s. In Ted Kotcheff’s Conradian vision of macho rituals, revelations, and depredations, the Outback becomes as much of a self-testing limbo as the indigenous Mars photographed by Nicolas Roeg that same year in Walkabout. Where Roeg charted the effects of nature on the sexual and racial barriers of its young protagonists, Kotcheff employs the sun-blasted topography to expose the submerged drives and anxieties of a stranded teacher (Gary Bond) whose resemblance to Peter O’Toole’s Lawrence of Arabia may not be entirely coincidental.

At its center is a searing marathon of beer pounding, manic cackling, and kangaroo slaughtering, led by an alcoholic doctor (an unaccountably sybaritic Donald Pleasance) who declares that “discontent is a luxury of the well-to-do.” Shot with a feverish feeling for heat and madness that’s worthy of Borges, Wake in Fright is a heady existential scald that demolishes colonial myths with a ruthlessness seldom matched in the ensuing Australian New Wave inquiries of Peter Weir, Fred Schepisi, and Bruce Beresford.

Building on the allegorical critique of his earlier film, Iron Island, Iranian director Mohammad Rasoulof emerges, with White Meadows, as one of the most vivid cine-folklorists since Sergei Parajanov. His is a world of landscapes both visceral and symbolic, in which the country’s sprawling salt flats appear forever on the verge of engulfing the nomadic characters. One village mourns the death of a woman whose bodacious body, even fully covered, is said to have moved too provocatively for the locals; another commemorates a virgin’s reluctant sacrificial “marriage” to the sea in an attempt to end a divinity-controlled draught.

Rowing between these and other sorrowful gatherings is Rahmat (Hasan Pourshirazi), a grave, middle-aged traveler always ready with a glass jar to gently scoop up the people’s tears. Is he a mythical guide? Communal healer? Silent witness to a catalog of veiled yet unmistakable forms of oppression? A fiercely compassionate call for freedom, the film features downright tangible sensory dimensions: The sky’s infinite color and the ocean’s saline taste are integral elements of the narrative, never more so than in the sequence of the painter being painfully “treated” for his unorthodox canvases—Rasoulof’s most personal portrait of the responsibilities and dangers of a questioning artist.

The San Francisco International Film Festival runs from April 22—May 6.