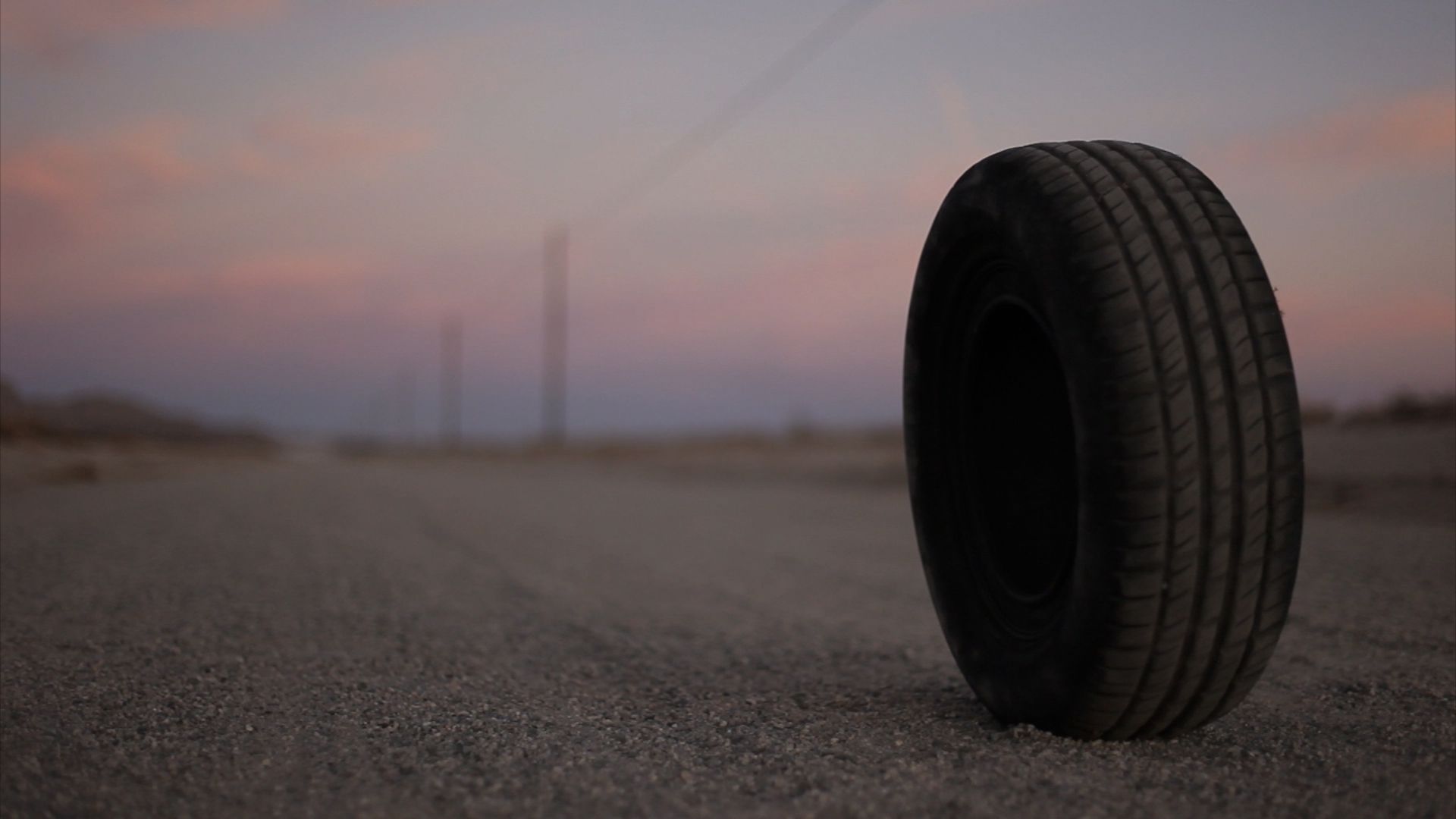 Describing or discussing Rubber, a film about a telekinetic killer automobile tire, is apt to make it sound like an inspired bit of absurdist lunacy, but to endure it, on the other hand, is to experience the mind-numbing limits of a goofy one-note joke. Running approximately 80 minutes longer than its scenario ultimately warrants, this low-budget feature—directed by French electronic musician Quentin Dupieux (a.k.a. Mr. Oizo), and shot with the video function of a still camera—opens with intriguing surrealism: a car knocking over chairs on an otherwise empty desert road; a man holding numerous pairs of dangling binoculars; and police officer, Lieutenant Chad (Stephen Spinella), explaining to the camera that all celluloid stories contain some elements that exist for “no reason.”

This is also the guiding principle of Dupieux’s project, though to take Rubber’s expository opening as the concrete answer to its ensuing questions of “why” is to fall for the filmmaker’s joke, since while some of Chad’s examples of “no reason” are legitimate (for example, there really is no specific reason why Spielberg’s E.T. is the color brown), others simply make no sense (there actually is a very clear motivation for The Pianist’s protagonist hiding out and acting “like a bum”). Ultimately, though, the not-so-underlying message of the film’s prologue is clear: Dupieux is up to randomness for randomness’s sake.

That would be an acceptable enterprise if Rubber were anywhere near as ludicrously amusing as its scenario necessitates. Instead, Dupieux treats his material with a pretentiousness and dreary lack of imagination that makes it borderline interminable. While the tire’s early moments alive—shaking dust from its inner ring and learning about the world by experimenting with ways to destroy objects—generate mild intrigue, they lead to nothing more than scene after scene of the tire stalking a brunette (Roxanne Mesquida) and other strangers around a remote motel, as well as doing arbitrary “normal” things like breathing, drinking water, and watching ‘80s exercise programs on television.

With the tire spying on Mesquida’s showering nude beauty, and using its psychokinetic powers to make people’s heads explode (shades of Scanners), a critique or homage to horror cinema would seem to be forthcoming, but Dupieux doesn’t deliver on that promise. Far more problematic, however, is simply the humorlessness with which the story executes its many sub-Buñuel meta scenarios, which also include an audience of moviegoing spectators who watch the action unfold via binoculars (and are eventually targeted for death), and Lieutenant Chad constantly addressing we the audience about the proceedings’ emptiness.

This self-referentiality also extends to the film’s aesthetic, full of cutesy musical cues and extended shots from behind the rolling tire, which is pleased with itself to a degree inversely proportional to its effectiveness. From the ‘70s tunes that accompany sights of the tire gaily swerving down paths after a kill, to shots of the magically animate object being reflected in the sunglasses of a gas station customer about to have his mind literally blown, the film’s purposely meaningless style fails to either comment on filmic clichés or generate anything approaching actual wit. Whereas Rubber’s setup screams for bounding, inventive inanity, Dupieux delivers only sluggish look-at-me pranks and performances whose intentional artificiality doesn’t excuse their dullness.

A finale, in which the tire is reincarnated and leads an army of minions to the threshold of Hollywood, might have recast the film—made, as it was, with a consumer-grade camera—as a call to arms against mainstream cinematic conventions and power dynamics. Yet any such gesture is negated not only by the incessant, overt proclamations of pointlessness, but more fundamentally still by the lifelessness of the film as a whole, which with uninvolving affectation manages only to spin its wheels.