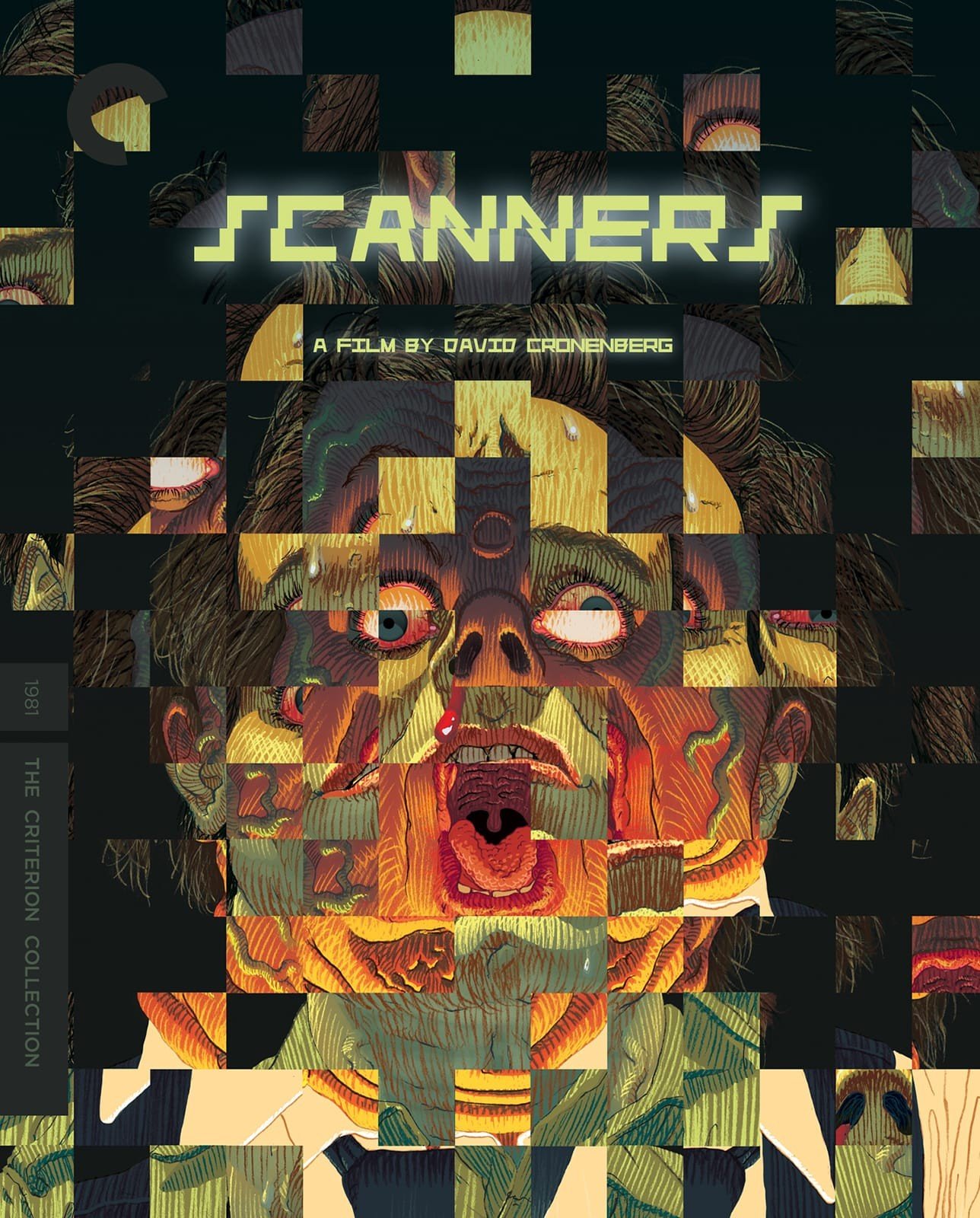 David Cronenberg’s Scanners pivots on a possibility, traditional to the director’s films, that evolution might move humankind toward an erasure of personal identity, paving the way for hive-minded or hive-bodied beings that often ironically discard old social hypocrisies and boundaries for new organic prisons. In the case of this film, advanced telepathic spies—the scanners of the title—are engaged in corporate warfare that threatens to trigger a mutation of the mass populace that could lead to everyone being mentally connected to everyone else. (The filmmaker, ever prescient, made this movie about 15 years before the proliferation of the Internet.) Sometimes labeled a reactionary, Cronenberg doesn’t distrust revolution so much as he repeatedly insists that the concept is inherently bogus. Fueling his cinema is the suspicion that a component of the human condition is the innate, often unrecognized, desire to live in some form of prison (most explicitly and literally expressed in Spider). And this yearning for containment opposes a pragmatic quest for transcendence to arrive at a resolution that merely alters the mode of imprisonment.

Transcendence is certainly on short supply in Scanners. The film’s prevailing emotional registers are terror, depression, isolation, and justified paranoia. Many directors would, at least obligatorily, acknowledge the liberating possibilities of enhanced mental powers. Hell, even Brian De Palma’s essentially hopeless tragicomedies Carrie and The Fury allowed their heroes to enjoy their blossoming telekinetic abilities once or twice, but Cronenberg presents the scanners’ power as another potential biological joke and curse. In close-ups that are tight even for him, the director shows us the trembling faces and the tightening skin of the telepaths and their victims, emphasizing their connection as an embodiment of violation that’s most vividly exasperated by Howard Shore’s operatically pulsating score, which is somehow simultaneously beautiful and suggestive of the audible equivalent of “ice cream headache.” The pain reaches its fullest and most literal expression in the famed exploding heads and blown-out blood vessels, and by the time the violence happens, you don’t fear it, but need it as relief from the formal intensity of its preparation.

The plot is perhaps consciously reminiscent of many of Philip K. Dick’s stories of vast, dehumanizing corporate convolutions. Cameron Vale (Stephen Lack) is a prototypical noir patsy, an untrained scanner who’s recruited by a security firm, ConSec, to track down Darryl Revok (Michael Ironside), an incredibly advanced telepath who intends to destroy the company and incite a social revolution. Unsurprisingly, a vast conspiracy is uncovered that proves the hero’s quest to be rigged from the start, rendering the outcome inevitable and pointless. Cameron and Darryl are brothers; Cameron’s new mentor, Dr. Paul Ruth (Patrick McGoohan), is their corrupt father; and ConSec was penetrated by Darryl’s forces from the outset. Cameron’s spy games are revealed to be naïve and pitiful in the face of a conglomeration that manufactured an idea of “us” versus “them” so as to distract everyone from inevitable invasion.

Scanners ages well. In a cinema presently glutted with pandering hero fantasies of the “one” who’s meant to liberate us from corrupt drudgery, it’s refreshing to revisit a movie that looks upon such pat optimism with contempt. Angry, narratively pared, and memorably lit in shades of industrial fugue-state gray by cinematographer Mark Irwin, the film certainly fulfills Cronenberg’s narrow design, which is also the rub. The film is surprisingly routine and emotionally drab for the director, particularly compared to the tragic familial intimacy of The Brood, which immediately preceded it and which remains one of the director’s most despairing and original works. The symbolic telepath story often appears to be at odds with the actual plot, which is a stalk-and-run narrative that reduces the power of the best scenes. The characters are interchangeable. The car chases and gunfights are disappointingly ordinary considering that the principles can mentally connect to supercomputers or other humans’ nervous systems. You can’t help but wonder why Cameron, or particularly Darryl, wouldn’t just bypass all the thriller convolutions and proceed straight to their target and start in with the obsessive one-upmanship body horror. This film ends at a point where Cronenberg’s subsequent Videodrome would just be getting started: with identities mooted and the new flesh beginning to emerge. Scanners has a gratifyingly gnarly sense of punk cynicism, but it never entirely breaks free of its own containment, which is to say the obligations of genre.

The transfer was created under David Cronenberg’s supervision in 2K resolution from a 35mm interpositive in Montreal. The image represents a dramatic alteration from the film’s appearance on prior home-video mediums, particularly in terms of the surprisingly vast new color spectrum. There’s a sense of warmth to this print that was previously undetectable, most pronouncedly in night sequences that emphasize a variety of city-life colors, such as reds and pinks and yellows. Even the industrial browns and blues that have always dominated the color scheme are more inviting—softer in a fashion that feels painterly and achieved rather than incidental. Clarity is strong, grain levels have been subtly turned down, and flesh tones are vibrant and lifelike. The monoaural mix has excellent depth and nuance, informing both the big set pieces and Howard Shore’s memorable score with welcome and necessary body. Purists may feel as if Cronenberg has pulled a slight George Lucas act of revisionism with some of these tweaks, but, unlike Lucas’s arbitrary doodling, this refurbishing improves the film in question.

The most interesting supplement is Cronenberg’s first film, Stereo, in its entirety. Even many of the director’s fans will find this to be a tough sit, as the film is a nearly abstract collage of images and sequences of young telepaths interacting in a vast corporate building, while distant, detached narration tells us of the experiments that are being performed on them. Scanners is vastly more accessible, but Stereo evinces a compassion for its characters that’s lacking in the former, and there are a number of sophisticatedly lonely images that pave the way for similarly despairing moments in Shivers and The Brood. “The Scanners Way,” “Mental Saboteur,” and “The Ephemerol Diaries” are all recent collections of interviews with many of the film’s FX principles as well as stars Stephen Lack and Michael Ironside, both of whom are amusingly direct about the difficulties of working on the film, particularly in terms of their financial compensation, or lack thereof. The 1981 interview with Cronenberg is a puff piece with the irritating habit of cutting the director off mid-sentence, though it’s of interest as a document of the filmmaker’s rising stardom. Radio spots, the theatrical trailer, and an essay by critic Kim Newman round the package out. The only glaring omission is a contemporary piece featuring the director.