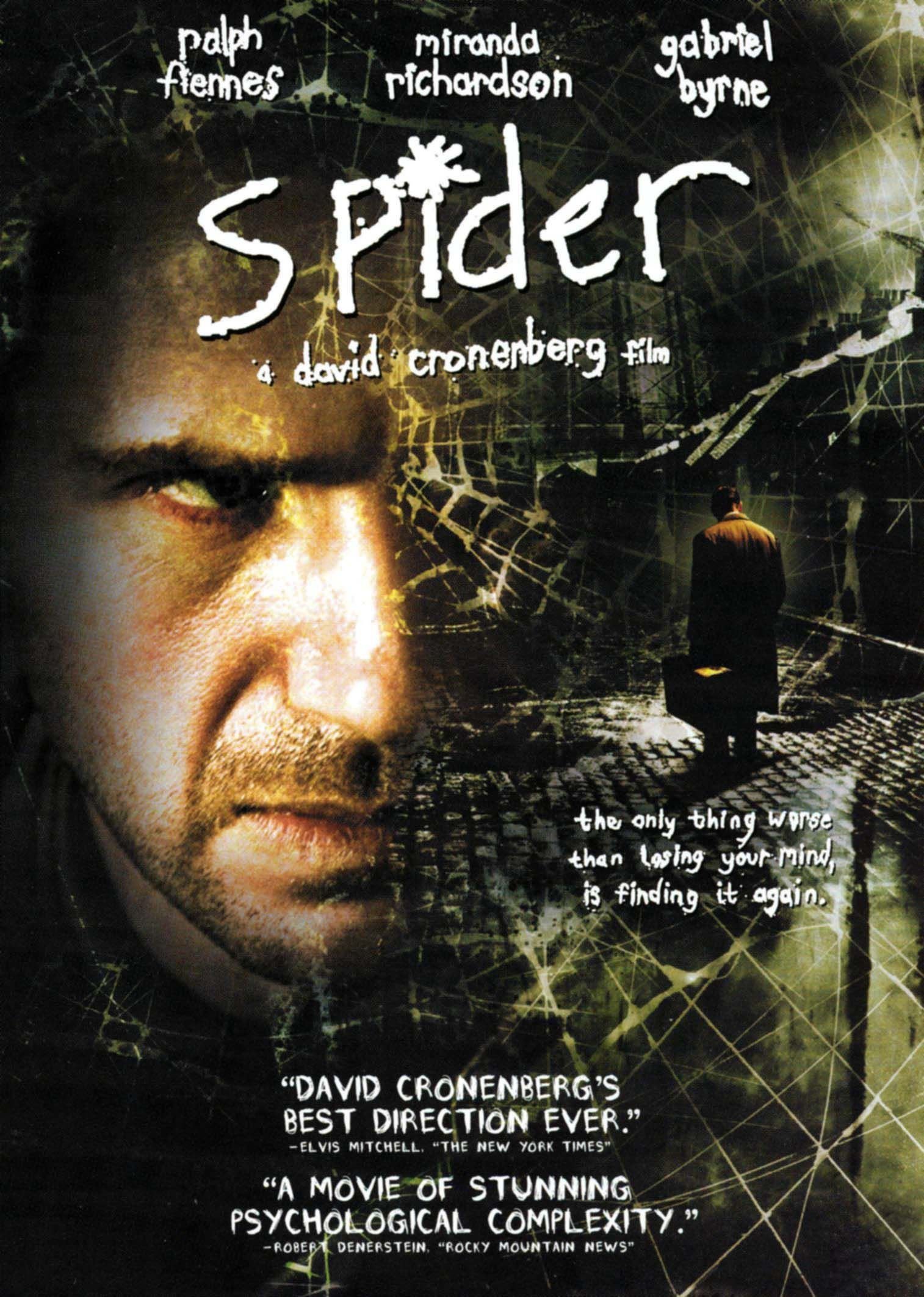 The minimalist Spider is a deviation of sorts for David Cronenberg, a director who has made a career for himself with squishy body horrors. This structurally rigorous exploration of schizophrenia is at once graceful and lyrically dehumanizing. Spider (Ralph Fiennes) arrives at Mrs. Wilkinson’s halfway house upon release from a local insane asylum. The rambling schizophrenic negotiates his past via a series of head-trippy visits to old haunts, scouring for and scribbling information in a small notebook written in his own special language. The film’s grayish mise-en-scène evokes the texture of a spider web, so much so that characters, not unlike the occasional colored chair, appear as if they are hanging from that web and struggling against time, working their way to the truth via a series of concentric circles. More remarkably, Cronenberg’s elegant camera approaches each and every transition between scenes as if it were climbing a web’s silky string. A tunnel, a canal and an imposing gas tank suffocate Spider with the look and scent of the past—when he sits on a bench near the canal it’s as if he’s hanging delicately from the edge of a pulsating fissure inside his own mind. The film itself feels as if it’s been woven from the silk of Spider’s memories, and as such it threatens to break at any given moment because, despite the rigorousness of its look, the raw material with which it is assembled is devastatingly fragile. Spider’s interaction with the past is an erotic ritual that reveals a Madonna/Whore complex born from the moment when the young Spider saw his doting mother (Miranda Richardson) modeling a blue nightie. The boy’s overwhelming oedipal tension informs his view of all women and the devastating effects of their sex. Despite the obvious Freudian machinations at work here, Cronenberg slightly reworks the particulars of the Oedipal Complex. For a film so rich in metaphors and allusions to webs, Spider is never suffocated by technique or its formal artifice. Like all great films, Spider demands to be seen again so that its many ambiguities can be fully sorted out. Imagine if you will what a lesser director, say Ron Howard, would have done with material like this. Ralph Fiennes’s performance is at once ugly, terrifying and heartbreaking. Certainly it must count as some kind of humanitarian effort. If Howard & Co. deserve Oscars for reducing schizophrenia’s terror with a bunch of swirling digital numbers and cutesy imaginary encounters in A Beautiful Mind, then surely Cronenberg and Fiennes are worthy of the Nobel Prize. If not the best film ever made about mental disorder, Spider is certainly the most painstaking, and it’s arguably Cronenberg’s greatest achievement.

Here’s a mixed blessing of sorts. If there’s any film released in the past year that deserves a pristine DVD transfer, it’s Cronenberg’s immaculate, rigorously composed Spider. Columbia TriStar Home Video presents the film in its original 1.78:1 anamorphic widescreen. Though colors are vibrant and the presentation itself remarkably film-like (the graininess and occasional flecks are more assets than distractions), edge halos can be spotted throughout and shadow delineation leaves much to be desired. Skin tones also appear a tad overexposed, though mainly in scenes from Spider’s past. On the other hand, the Dolby Digital 5.1 surround track is a work of near spotless perfection. Not only is every line of dialogue perfectly audible but every sound in the film that tortures Spider’s fragile mind (from beer pouring into a glass to coins rattling inside a man’s pocket) registers with unnerving resonance.

If Cronenberg had never become a director, his commentary track on this DVD edition of Spider suggests that he might have made an incredible psychologist. Though often redundant of some of the featurettes included on DVD, the commentary track more than confirms Cronenberg’s genius. From the use of a 400-year-old Elizabethan maternal chant over the films opening frames to the very pacing of the film (which mimics Spider’s own movements), Cronenberg’s almost vigilant desire to give every image in his film a certain artistic truth is as captivating as, well, a spider spinning its complex yet delicate web. Next up are three generally excellent featurettes, all pieced together from the same junket interviews: Cronenberg discusses Fiennes dedication to Spider and the film’s many financial hassles on “In the Beginning: How Spider Came to Be; “Weaving the Web: The Making of Spider” is a compact yet insightful observation of the film’s personal and expressionistic artistic process; and “Caught in Spider’s Web: The Cast” allows Cronenberg to give his actors well deserved pats on the back.

Rounding out the disc are filmographies, a weblink to the film’s official site, and trailers for Spider, Adaptation., Punch-Drunk Love, and The Devil’s Backbone.

Even if the video transfer is somewhat underwhelming, this Spider DVD is a must-own. A film that deserves multiple viewings.