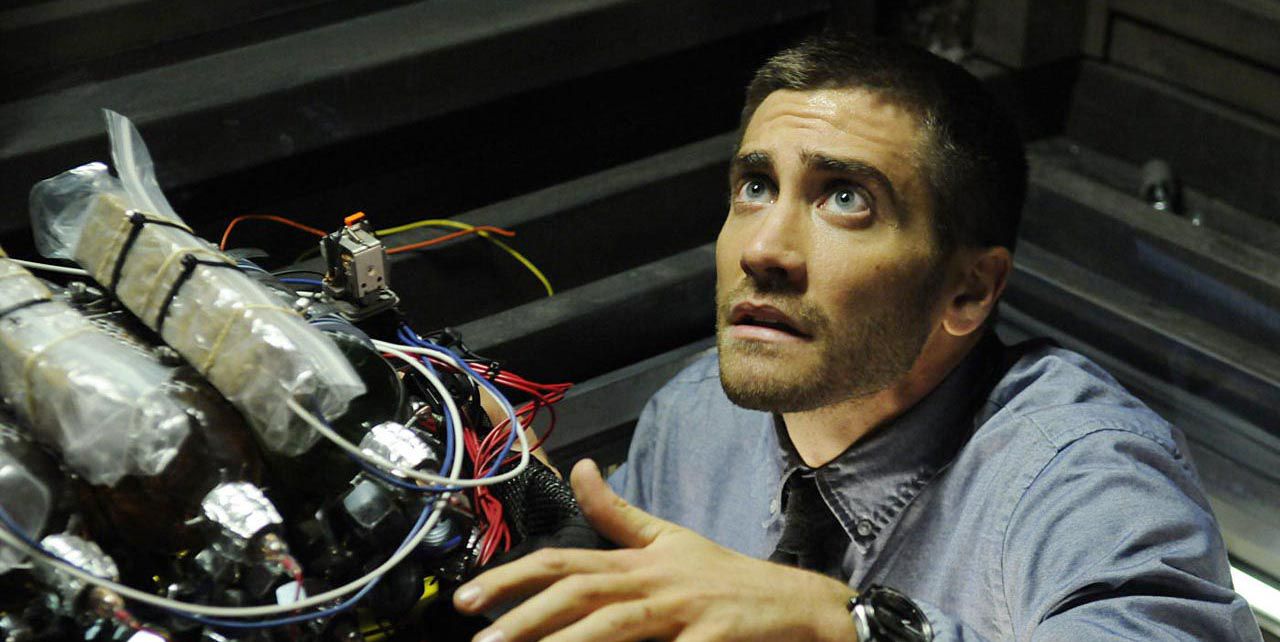 Duncan Jones’s fascination with dueling identities continues with Source Code, a clever if insubstantial mashup of Quantum Leap, Groundhog Day, 12 Monkeys, and Agatha Christie’s Murder on the Orient Express. The film opens by visualizing its protagonist’s schizophrenic circumstances, with slumbering Air Force Sergeant Colter Stevens (Jake Gyllenhaal) resting his head against a moving train’s window, his visage doubled by its hazy reflection. Upon awakening, Colter is engaged by Christina (Michelle Monaghan), who calls him Sean and acts like they’re acquaintances, a fact that disorients and panics Colter, whose confusion further amplifies when an explosion rips through the train and he awakens again—after a voyage through an imagistic swirl—in a dark, tiny cabin.

There, via computer monitor, officer Goodwin (Vera Farmiga) explains the basics of his crazy situation: Earlier that morning, a Chicago commuter train was blown up as the first salvo in a forthcoming series of attacks, and the military is sending him back in time, to the exact same eight-minute period, to locate the bomber. Forced to continually relive the same scenario while in another man’s skin, Colter thus becomes Bill Murray-by-way-of-Scott-Bakula-by-way-of-Hercule-Poirot, except that—because he’s really traveling to the dead Sean’s expiring recorded memory of the morning’s events, dubbed a “Source Code”—his behavior during these trips has no direct ramifications on the future.

Despite that twisty-turny state of affairs, Jones (working from Ben Ripley’s script) doesn’t linger on the scientific mumbo-jumbo on which his story is founded, instead establishing his premise’s fundamentals and then putting the proverbial pedal to the metal. Source Code has a velocity that helps alleviate nagging questions about the logic of this time-space conundrum, with Jones’s direction proving slick, efficient, and—aside from a few CG fireballs and one computer-assisted single take of Gyllenhaal leaping out of the speeding locomotive—free of self-consciously stylized gestures.

Such momentum also prevents any serious consideration of the material’s underdeveloped politicized arguments about the military-industrial complex’s disinterest in the humanity of its soldiers, which comes via Source Code creator Dr. Rutledge’s (Jeffrey Wright) coldly opportunistic priorities with regards to domestic terror catastrophes, his program’s success and the ultimate fate of Colter, whose actual real-world condition is a mystery smartly prolonged throughout the film’s first half. Gyllenhaal’s befuddled yet staunch heroism is nicely matched by Monahan’s fetching cheeriness, and Farmiga brings surprising nuance to a role lacking depth, thereby providing a measure of empathetic personality to a sturdy but generally gimmicky genre affair—even if overenthusiastic climactic detours finally cause the fleet film to miss its earlier, more apt stop.