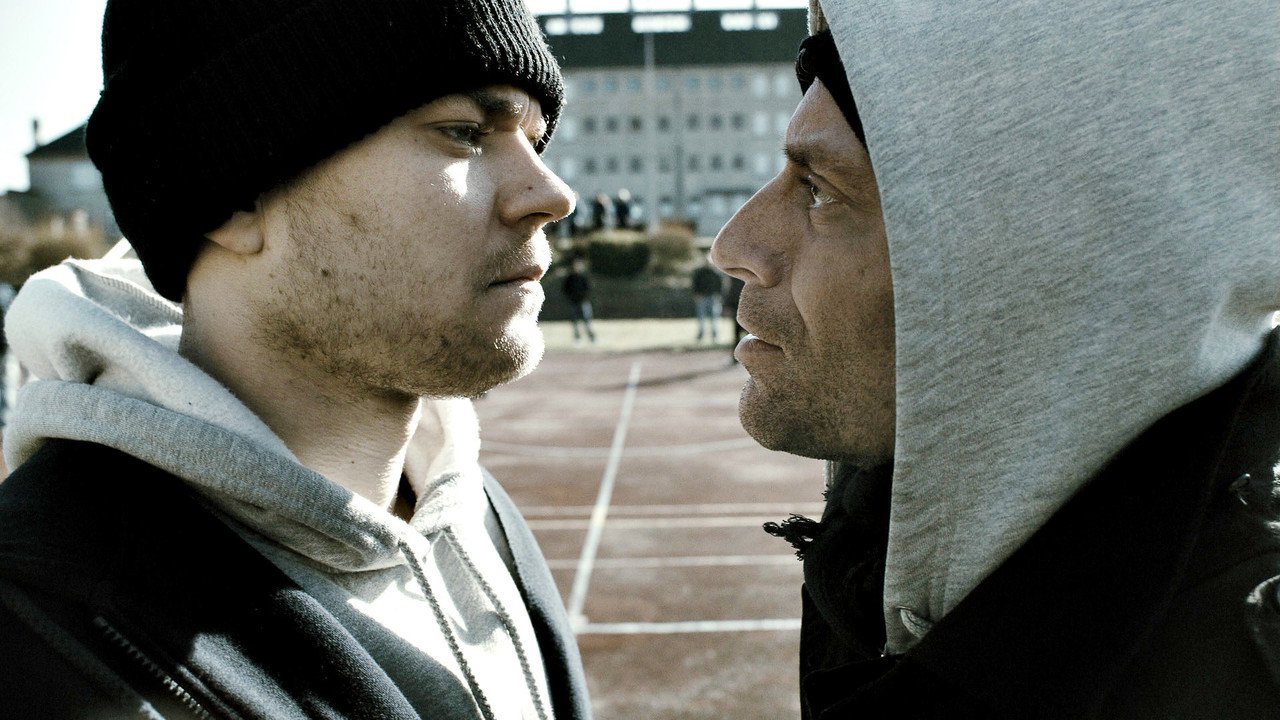 Committed to carrying on the tradition of Dogme 95, directors Michael Noer and Tobias Lindholm wanted to create a prison drama that did not rely on outworn clichés (noble prisoners, evil guards, escape attempts, hope triumphing, etc.) but was an attempt to capture the reality of prison life through one man’s subject experience. With R, a movie which plays like something out of Kafka, they have done just that.

Prisoner “R” has been incarcerated for violent assault. It is his first conviction so he is, naturally, terrified of what awaits him in Horsens State Prison (a notorious tough penitentiary in Denmark, now closed; R was filmed on location there). Hand-held camera follow R through the humiliating dehumanizing intake process (the strip search, the surrender of personal objects), and then up into the ward which now will be his home. R has been placed with hard-core lifers, prisoners who are fully institutionalized, giant blunt-edged muscled men, who stare at the more slight figure of R, with his bleached hair and handsome face (the actor is a dead ringer for Kurt Cobain), as though he is bait. They practically drool as he goes by.

Pilou Asbaek, a young Danish actor, plays “R” (the character’s real name is Rune), and it is a fantastic star performance. He is in nearly every shot, and Asbaek doesn’t miss a beat in R’s relentless transformation from newbie to brutal survivor. He is riveting to watch. Rune is a bit OCD in his desire to have a clean space to live in. He sits in his cell scrubbing the dingy radiators, rubbing away at the windows. He takes it upon himself to clean the tiles in the vile bathroom. A small character detail such as this shows Noer and Lindholm’s shared gifts as storytellers. The success of a story like this one, that, let’s be honest, we’ve all seen before, depends on observations with that type of specificity.

One of the best things about R, and why it works so well, is its disinterest in filling us in on how prison works, its insistence that whatever Rune knows is what we know also. We are not ahead of him in any way. Rune isn’t given a manual on how to survive prison and so we are deprived of information as well. The dynamics of the relationships (who to trust, who to cozy up to for protection) are complex and a false move would mean death. The claustrophobia of the real-life setting, the caked-on grime of the windows, the stink of the bathrooms, the sweat in the weight room, is palpable. Directors Lindholm and Noer are not interested in presenting a simplistic morality play here. They do not glorify the prisoners, they do not demonize the guards. Prison is terrible for all involved, but the directors are not sentimental either. It is clear that society needs to protect itself from such prisoners, and that there are those people who are beyond rehabilitation. But what a terrible and bleak conclusion to have to draw, and what does that mean for first-time offenders like Rune, who should get out in two years? Will he have been hardened beyond repair by then, so that the only life available to him is a life of criminality?

Rune befriends a fellow prisoner named Rashid, and this brings me to the element of the film that stood out the most for me. R is a fine drama—with intense performances, a pitch-perfect sense of pace, and a coherent structure—that does not do anything particularly new. But what is fresh and original here is the portrayal of the divide between the “Arab” prisoners and “The Danes.” The animosity between these two groups is so bad that they are kept on different wards. A timely and sometimes taboo issue for Denmark at the moment, R, being a prison drama, is capable of compressing this issue and showing it in its most extreme state, with no room to breathe, no room to get away from one another to take the edge off. R is not at all misty-eyed about the chances for reconciliation and understanding. The friendship between R and Rashid, and the surrounding prisoners, brings all of this into sharp relief. The world of R brought to mind Kipling’s famous (and depressing) statement, “East is East and West is West (and never the twain shall meet).” R is unafraid to stare that divide in the eye, call it out, name it. There are no pulled punches. R has the courage of its convictions, from start to finish.