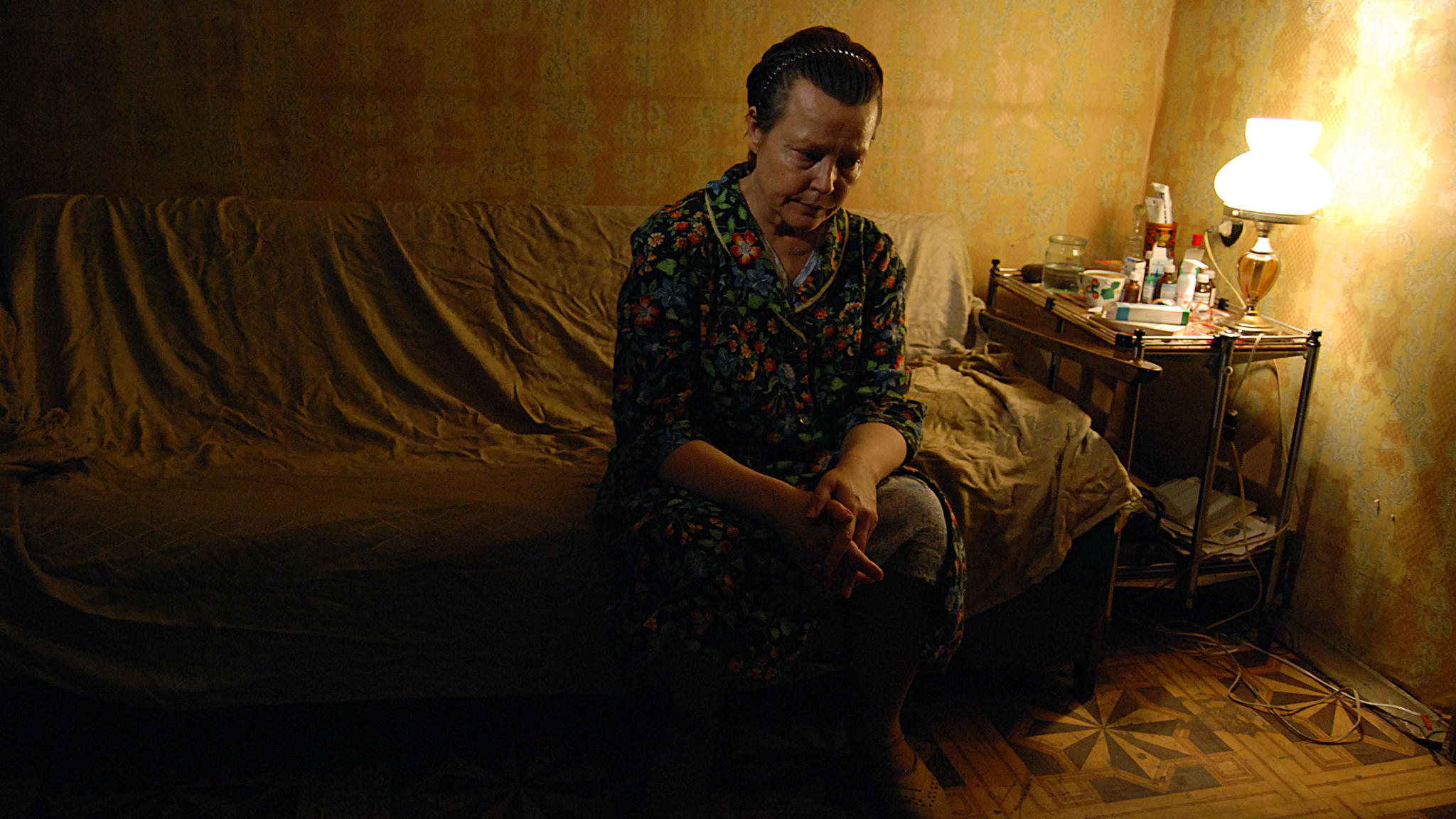 Co-directed by Russian husband and wife Yelena and Nicolay Renard, Mama shows a couple of days in the life of a mother and her obese 40-year-old son. There is no dialogue in the film. There is no overt plot, although there are clues that something is about to happen (one scene shows the mother packing a suitcase with the son’s clothes), and the film is made up of long silent takes, one after the other after the other, observing the rhythms of these two characters as they go through their daily lives.

The mother is overly protective of her son, although maybe he really does need it. Mama shows the dangers of babying an adult. The two of them sit at a table as the rain batters the window, and he eats the hard-boiled eggs that she has cooked for him, and she reaches out and wipes his mouth after every bite. He sits in the tub, naked, and she gives him a bath, a startlingly intimate scene. She crouches on the linoleum shining his shoes. These are not scenes so much as extended tableaux.

The Renards did not use professional actors and so Mama, with the evocative opening title “based on a true story,” feels like a documentary. It made me wonder about the rehearsal process, and the choice of scenes and small events. Did they come out of improvisation? Observation of the “true story”? Nothing is purposefully portrayed here, there is no “acting” going on, and yet there are moments of quiet power here. The mother, after a long day, washes her face in the sink and then, suddenly, stares at herself in the mirror for a long time. The next thing we see is her curling up on the couch (where she sleeps), and whatever might have been revealed to her while staring at her own reflection is left for the audience to guess.

One of the early scenes shows a park with trees and paths (one of the few exterior shots), and we see the son walking slowly into frame holding a lunch box. There is a cast-iron statue in the middle of the park of two deer, a doe and her fawn. The fawn reaches up its head towards the mother and the doe gracefully bends her head down towards her baby. I am sure that this choice of setting was deliberate, as we watch the giant son stand by the statue, eating his lunch. The nourishing maternal energy of the doe, necessary to bring her vulnerable baby to adulthood without harm, is somehow made perverse in Mama, where mother and son live in a potent cramped realm of caretaking and submission.

Mama may have had more power if it had been a short film, the energy having no chance to dissipate as I felt it did here. Baffling though the experience was for me—quiet and sometimes boring—Mama does have a strange and compelling pulse to it, with the non-professional actors fearlessly presenting their bodies, faces and flaws to the camera in a way that puts many well-known movie stars to shame. The adult son has a map of the world tacked up over his bed. It made me wonder why his mother was packing his suitcase, and where on earth he was planning to go.