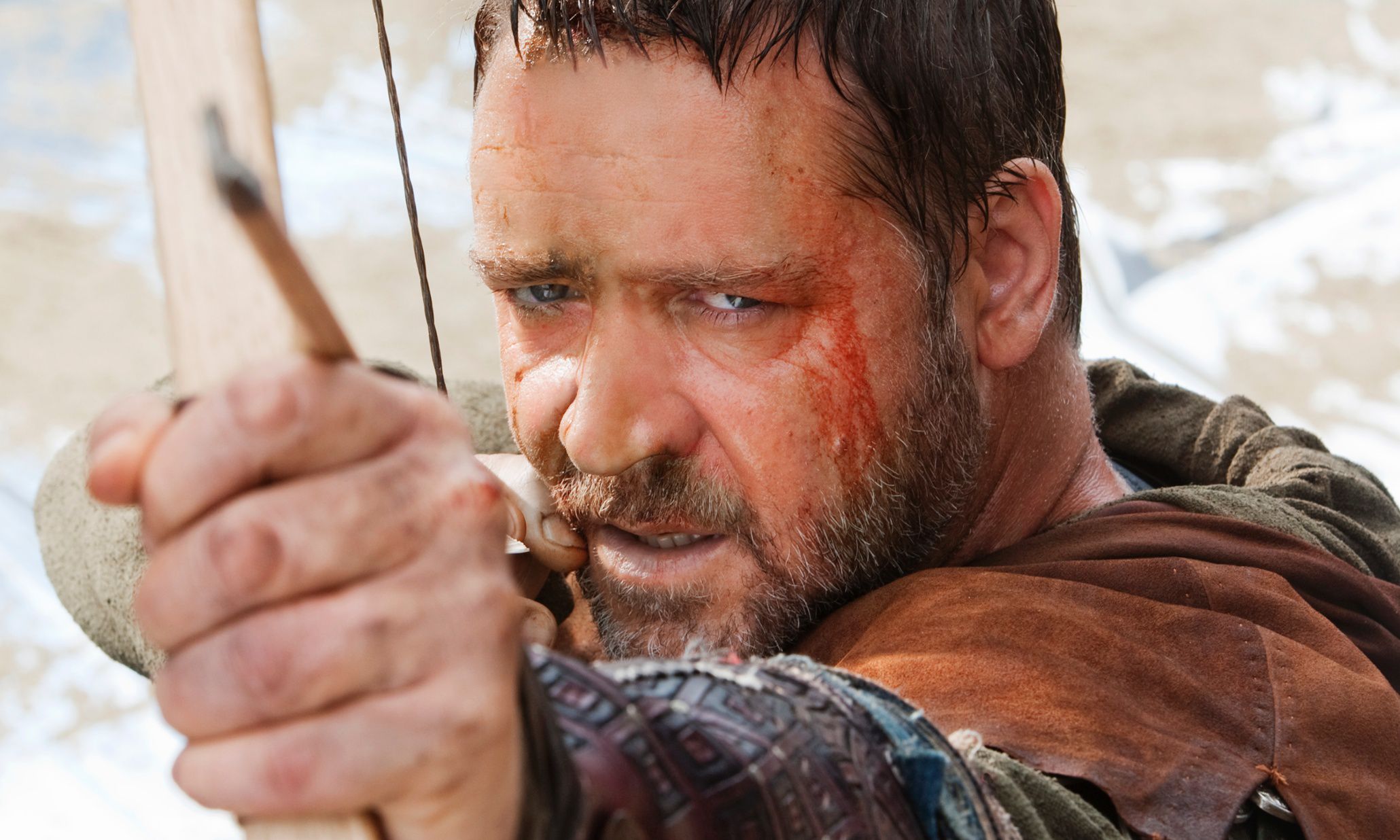 According to one of Robin Hood’s opening title cards, and to Sir Robin Longstride (Russell Crowe) himself, the outlaw takes his place in history in times of tyranny. That sort of recycled philosophical wisdom typifies this new film about the mythic Robin Hood’s life and times, filling it to its mice-infested rafters. Though realistically ancient-looking, this burly but sluggish production takes very obvious pains to engage with the myth of Robin Hood in a way that it conforms to modern political biases. From his fighting next to Richard the Lionheart (Danny Huston) to his ridding of Nottingham of violence at the hands of its nefarious sheriff (Matthew Macfadyen), the cool-headed imposter often dreams of his deceased father, speaks of redistributing wealth to a mostly adoring audience, and helps to bring together a divided nation. In short, Scott and screenwriter Brian Helgeland have given the Tea Party another thing to rail against.

The gallingly overpraised Scott has a few times throughout his long career benefited from material rich enough in characterization to distract from his hackneyed, easily reproducible visual style. Myth and warfare entice him, but his fixations always feel garish and empty-headed on screen; as in the despicable 1492: Conquest of Paradise, and Gladiator, Kingdom of Heaven, and American Gangster, Robin Hood is mostly a triumph of costume design and art direction. Yes, there’s a real sense here for the look of the story’s Medieval setting that doesn’t feel kitschy or overwrought, and Helgeland’s script carefully, subtly even, links key historical flashpoints from the time period, but the story’s evocation of the economic troubles and political backbiting that allowed for Robin Hood’s rise to infamy is still elementarily drawn. There’s no patience or sincere regard for the strife of the poor, no commiseration for the horrors inflicted on them by Nottingham’s dastardly sheriff. What most registers on screen is the manner in which the arrow-flinging Robin Hood can, through superhuman ingenuity (which is to say, the powers of CGI), hit his arterial targets from Olympian distances.

Crowe’s interpretation of Robin Hood may be listless, but it contrasts, almost mercifully, to everyone else’s inexplicably petulant takes on their own characters. Helegand doesn’t see the man as a braggart on the field, or endow him with a voracious sexual appetite, instead saddling him with predictable daddy issues that must be reconciled before the hero successfully appeals to the jealous Prince John’s (Oscar Isaac) humanity and fighting off the invading army of France. He sees Robin Hood as a mess, but unlike the hero, his screenplay lacks the courage of its convictions: Though better than the scenes that lay out the political distress of the time (a scene between Robin Hood and Friar Tuck is particularly fatuous, what with the preponderance of references to bees and wolves, for straining to convey the era’s overly symbolic manner of speaking), Robin Hood’s scenes with Sir Walter Loxley (Max von Sydow), during which two strife-ridden father-son backstories conveniently dovetail, lack A Lion in Winter’s complex understanding of familial discord for Robin’s depression to feel resonant. In the end, his condition feels like something needlessly foisted on him by an armchair psychiatrist.

The mystique that surrounds figures like Robin Hood feels spoiled every time a filmmaker insists on telling his or her story with some measure of historical accuracy. Scott doesn’t understand that the myth of Robin Hood remains popular today because it’s precisely that: a story of heroism that fulfills a spiritual need and derives its potency from distortion and elusiveness. These stories thrive on being beautiful lies, and their more successful filmic interpretations are almost always experimental by nature, because the spirit of the avant-garde’s visual abstractions is much the same as the feverish mode of storytelling that has kept the myth of Robin Hood alive for almost a thousand years. Avant-garde technique is not only a means of grappling with our memory of the past and present, but a means of allowing that memory to persist.

But Scott is no Sergei Eisenstein, Carl Theodore Dreyer, Elem Klimov, or Terence Malick. He may be a visionary, but he’s no poet, for his tools are the same familiar, borrowed ones used by other middlebrow filmmakers. Rather than study the eyes of his characters and the emotions that lurk within them, he fixates only on their sweat. The final showdown between Robin’s army and the invading French brings to mind popular visions of Americans and Germans sparring on Omaha Beach. A sword swings and the extras flail about in dramatic overreaction; Robin Hood’s regressions are shot in J-horror fashion; and when a cottage with people trapped inside is set ablaze (a nod to Come and See?), Scott doesn’t film this horror from the proper distance or with the necessary patience for it to be truly appalling.

Every scene seems to begin with the same sideways swish of the camera and every action sequence is interspersed with psychotic flashes of fast-motion. In Sherwood Forest, for example, there lurks a posse of thieving boys that stealthily and laughably moves like the ghoulies from The Orphanage; though never seen, crows perpetually squawk on the soundtrack; and the preposterous score—as in the “rape music” that plays during the Sheriff Nottingham’s attempt at boinking Marion (Cate Blanchett)—suggests a collaboration between composer Marc Streitenfeld and the angels above. Which is all to say that Scott’s cacophonous, darkly lit vision—an attempt to give Robin Hood the Braveheart treatment—doesn’t mesh well with Helegand’s comparatively more patient agenda. Theirs is a marriage made in audience-capitulating hell.