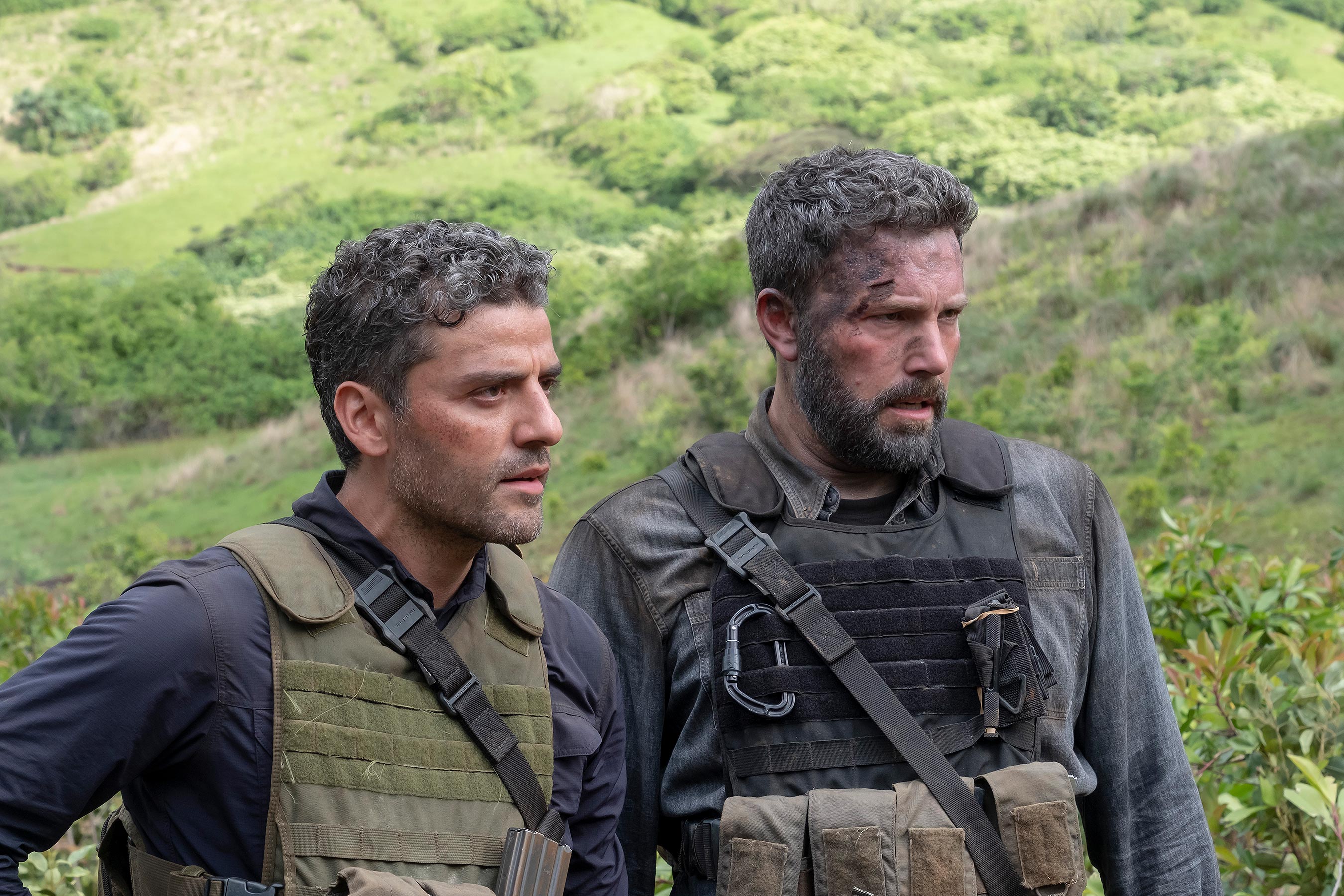 There’s one memorable image in the entirety of Triple Frontier’s 125-minute running time. As a handful of hardened military badasses ascend a precarious South American mountainside, one of the mules carrying their plundered drug money topples over a cliff. As the animal falls to its death, money is seen fluttering in the air below, resembling butterflies. The mule’s demise stings, as the animal is one of the few true innocents in Triple Frontier, and the falling money suggests both a callow mocking of life as well as an inadvertent ruing of the same. For one brief moment, co-writer/director J.C. Chandor manages to poetically express his shopworn theme of the perversion of greed.

Generally, though, Triple Frontier is eaten up by the same murky lifelessness that defines A Most Violent Year. Even in better films like Margin Call and All Is Lost, Chandor reveals an obsession with professionalism, which he seems to associate with grace. His characters greet extreme situations with po-faced solemnity, muttering jargon in under-lit rooms that seem to be pledging allegiance to the cinematography of Gordon Willis. It’s no wonder that Chandor’s work has been acclaimed, as he’s a student of cinema who makes tidy suggestions of great and timely films. But there’s nothing beneath his essentially impersonal stylistics. His characters are sketches with no wrinkles, passions, or emotions, while his themes are obvious.

Triple Frontier is a heist yarn yoked from decades of headlines pertaining to the U.S. government’s meddling in both legit and black-market South American societies. Which is to say that the film could’ve either been fast and gleefully trashy, authentically critical of America’s hypocrisy, or perhaps both. Yet Chandor manages to have none of the above, as he works in a characteristically portentous, slow-for-slow’s-sake manner. The setup, which eats up half the film’s running time, is so murky that audiences might miss what should have been the central narrative hook: that the former American soldiers are stealing money from a drug dealer hiding out in the jungle along the triple border of Peru, Brazil, and Colombia.

This information could have been a driver of suspense, as the American protagonists plumb a corrupt and chaotic realm of so many jurisdictions and rules that there are effectively no rules at all. Remarkably, Chandor makes so little of this information that one may walk away from the film having no clue as to the significance of the title. (Co-writer Mark Boal initially fashioned the story with Kathryn Bigelow, who’s credited as an executive producer, so one may yearn for the electric fluidity she might’ve brought to Triple Frontier as a director.)

Chandor treats the heist genre in a manner that’s reminiscent of Steve McQueen’s direction in Widows, as both filmmakers attempt to transcend certain tropes and clichés with over-emphasis, to be sure that we may savor the thematic relevance of certain bits of exposition. Both films tread water with repetitive backstories that are meant to connect the eventual heists to various forms of contemporary inequality. In the case of Triple Frontier, we learn that Tom Davis (Ben Affleck) is a celebrated “warrior” who can now barely afford to support his kids while trying to sell shoddy condos—a fact which Condor underscores with a typically pretty yet blunt shot of a leaky faucet. Davis’s compatriot, William Miller (Charlie Hunnam), also feels abandoned by his military superiors, for reasons that are never entirely clear, and this irony is bolstered by the fact that he now gives inspirational speeches to fellow soldiers. Like Widows, Triple Frontier is in dire need of playfulness and spontaneity.

What Chandor and McQueen seem to misunderstand is that the American crime genre is almost inherently critical of the society that yields it, serving to express the violent impulses of those who take it upon themselves to literalize the “everyone for themselves” ethos of capitalism. Triple Frontier doesn’t need pared-down, barely audible speeches about the alienation of the classic American soldier, as the perverse irony of such men staging a corrupt government raid for their own benefit is already overwhelmingly evident. What the film needs is momentum—a sense that each action is uncontrollably begetting the next, an impression that Chandor’s stodgy direction is incapable of conveying. (The heist of the drug dealer’s mansion, in which the soldiers enter a kind of heart of darkness, is particularly inexpressive.)

Tom, William, and their collaborators—most notably the heist’s mastermind, Santiago Garcia (Oscar Isaac)—are ciphers who become indistinguishable among a labyrinth of jungles and mountains. Chandor could have satirized this dimension of the film, but then, he might have compromised his tightly governed atmosphere of earnestness. Chandor attempts to mount a character study rather than an examination of propulsive force, though he’s also indifferent to a poignant element of many films about heists: that such crimes are often opportunities for the disenfranchised to became professionals again. With Triple Frontier, Chandor turns an intensely physical narrative into another of his inadvertently generic studies of procedure.

Review: Captive State Is a Crafty Genre Piece that Underserves Its Best Ideas