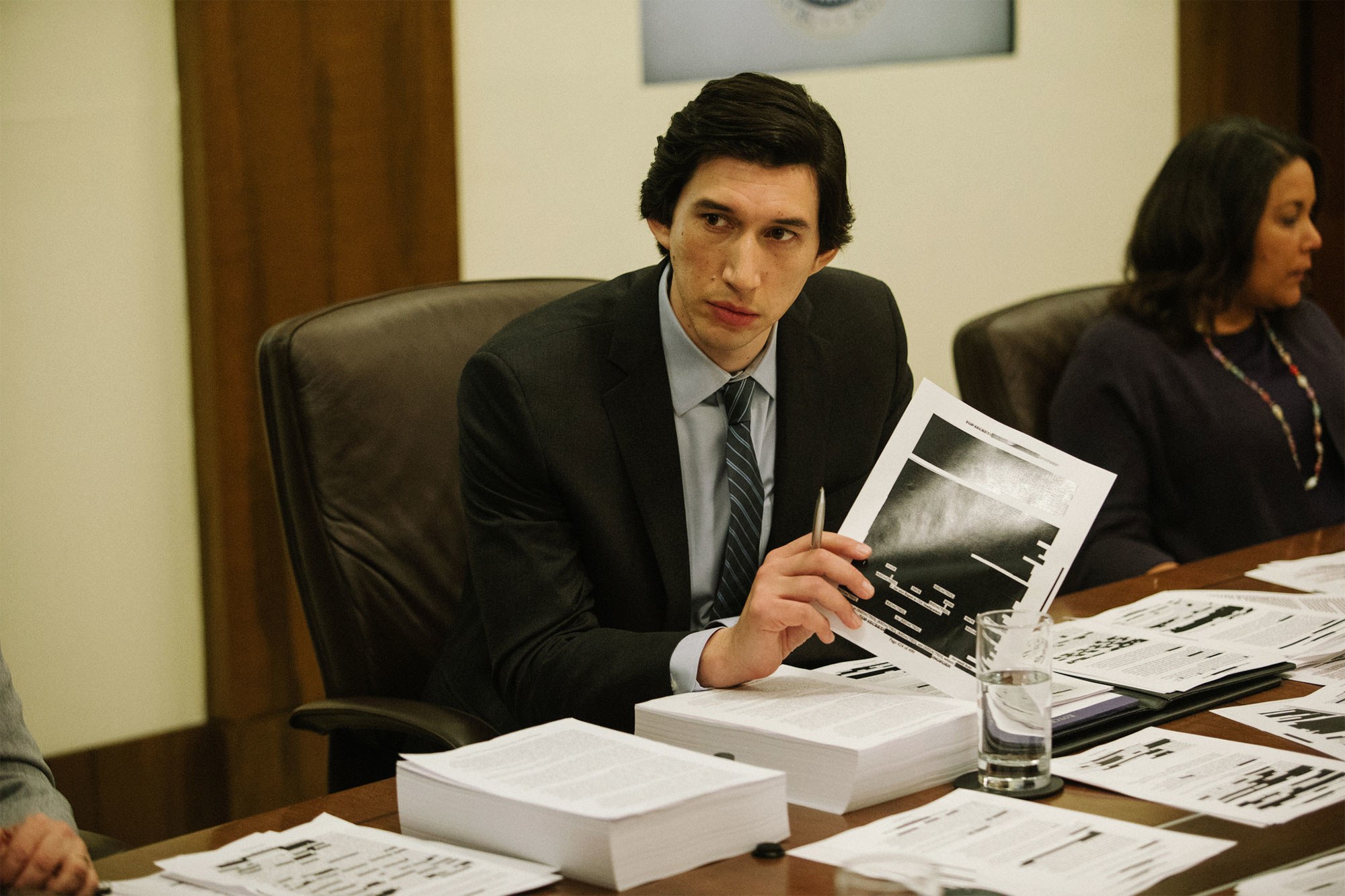 The moral morass of the George W. Bush era is surveyed and scrutinized in writer-director Scott Z. Burns’s The Report, a true-life docudrama that bears all the visually monochromatic, thematically jaundiced hallmarks of Burns’s collaborations, as screenwriter, with Steven Soderbergh. Burns even manages to slightly best his mentor with his second solo feature. Compared to Burns and Soderbergh’s most recent joint effort—the feeble, scattershot Netflix-produced satire The Laundromat—The Report zeroes in on its incendiary sociopolitical subject with laser focus. That still doesn’t mean it adequately challenges preconceived notions about an especially dark period in American history.

The film’s title refers to the Committee Study of the Central Intelligence Agency’s Detention and Interrogation Program, a 6,700-page document that took a long, hard, and unflattering look at the C.I.A.’s post-9/11 use of detention and torture—or, in politico parlance, “enhanced interrogation techniques.” Daniel Jones, the committee’s lead investigator, is the protagonist, and he’s played by Adam Driver with a reserved sternness and solemnity that’s occasionally leavened by full-throated flashes of righteous indignation. Jones is all work, no play, and it’s evident that Burns intends this forbearing crusader as an audience surrogate. Yet Daniel mostly remains a cipher, a human enigma attempting, with Sisyphean effort, to expose and unravel the most sadistic and inhumane institutional practices.

It can be fascinating, of course, to watch a film that’s purely about process, revealing of the ways that those tied to an operation come off as cogs in a Moloch-like machine. And it helps, at least initially, that Driver is so good at conveying a total single-mindedness. When Jones looks around the cloistered, colorless basement office that will serve as headquarters for his investigation, he’s like an artist glancing at a blank canvas. For Jones, the swamp isn’t something to be drained, but to dip his brush in. And he’s painting a picture for an audience that, for the most part, is likely to undercut and minimize his efforts.

Burns is clearly reappropriating and remixing cinematic lessons learned from Alan J. Pakula’s starry Watergate exposé All the President’s Men. Jones’s boss, senator Dianne Feinstein (Annette Bening, letting her wig do most of the acting), assumes the role of Ben Bradlee-esque overseer. Archival footage of many of the big names in the torture debate (such as Dubya and Dick Cheney) is peppered throughout. And there’s even a paranoia-tinged encounter between Jones and a Deep Throat-like figure played with nauseated edge by Tim Blake Nelson.

The margins of The Report are filled to the brim with character actors doing creditably yeoman work, among them Corey Stoll as Cyrus Clifford, Jones’s pragmatic lawyer, Jon Hamm as chiding National Security Adviser Denis McDonough, Ted Levine as officious C.I.A. Director John Brennan, and Matthew Rhys as a New York Times reporter desperate for a scoop. Elsewhere, Maura Tierney and Michael C. Hall, as a pair of ideologically adaptable bureaucrats, headline the sections of the decade-plus narrative that detail the nitty gritty of the enhanced interrogation program, waterboarding most definitely included.

Cinematographer Eigil Bryld shoots these latter sequences with a sickly green-orange tinge that one supposes is meant to convey ethical queasiness. Whereas the scenes featuring Jones and his team poring over papers and presenting their findings to functionaries in various stages of outrage (or not) tend toward the icy blues or the ultra-high-def neutrality of a David Fincher production. Ever-shifting color temperatures aside, The Report is rarely stimulating. Its conscious detachment from the events it portrays proves not so much analytical as noncommittal. The closest it comes to picking a side is a tossed-off moment in which Jones throws some scowling shade at a TV commercial for Kathryn Bigelow’s Zero Dark Thirty, which was rather unconvincingly sold during its release as a work of objective nonpartisanship.

It’s strange, then, that Burns tosses a flagrantly uncritical bone in The Report’s final scenes, as John McCain, often held up as a model of principled dissent, is shown passionately decrying the United States’s torture program on the Senate floor. As in many a Hollywood production about American transgression, Burns ultimately can’t help but sentimentalize the better angels that supposedly reside in the land of liberty’s monumentally flawed human fabric.