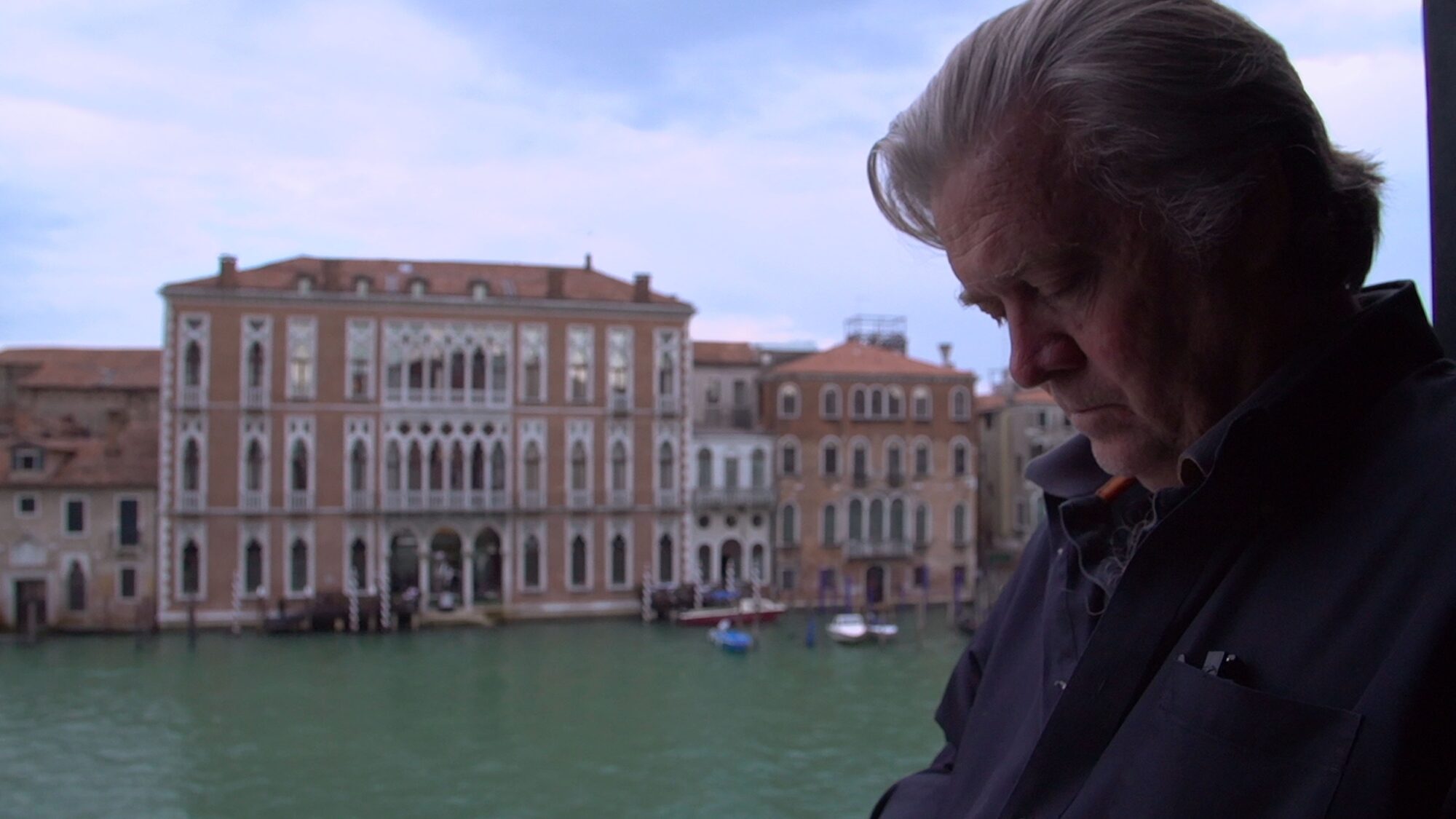 To paraphrase Fran Lebowitz on Donald Trump, conservative firebrand Steve Bannon is a nitwit’s idea of an intellectual. A semi-book-smart gadfly with a decent sense of humor, the vainglorious Bannon thinks in century-spanning terms that always involve him and his cohorts standing heroically at the barricades defending Western civilization. This portrait of Bannon comes through with sharp clarity in Alison Klayman’s immersive documentary on the Republican party’s new Lee Atwater—or maybe their Sun-Tzu, as Bannon would likely prefer. In some ways, The Brink serves as a visual addendum to Devil’s Bargain, Joshua Green’s electric and somewhat terrifying 2017 book describing Bannon’s “storming of the presidency” and his battle plan for the nation-changing “populist” revolt whose opening salvo was the election of Trump to the presidency of the United States.

Starting in the fall of 2017, Klayman tagged along after Bannon while he launched into his post-Trump career. Red-eyed, snaggle-haired, and powered by Red Bull and a river of Citizens United-cloaked funding from the people he proudly terms “deplorables,” Bannon doesn’t seem to be letting anything get to him. This, even though that August he had been pushed out as Trump’s chief strategist—possibly in part because Devil’s Bargain’s take on him as the brains behind the operation upset the president. The Bannon we see on film isn’t holding grudges. He’s charging forward, pushing the same nativist message that he funneled through Trump, carrying water for every paleo-conservative candidate he can find at the Conservative Political Action Conference, and even still hanging out and happily joshing with Green.

For much of the documentary’s fast-paced and verbally clangorous running time, Klayman shows Bannon in his preferred state of happy malcontent as he tries to extend his brand outside of the United States. Styling himself as the strategist for the “global revolt,” Bannon flits around Europe through late 2017 into 2018, helping to stoke the fires lit by proto-fascists like Hungary’s Viktor Orban, France’s Marine Le Pen, and the U.K.’s Nigel Farage. The meetings Klayman records with Bannon and his white European anti-immigrant confederates, all of them high on Trump and Brexit as they hash out a way to unite their message as “The Movement,” could serve as a helpful rogues’ gallery for historians looking back at this hinge moment decades from now. Back in America, Bannon puts together a stable of candidates he thinks best equipped to carry forward the Trumpian message of Muslim bans, tariffs, and America First-ness. His first choice? Judge Roy Moore.

The results are mostly a disaster, with Bannon’s American candidates being resoundingly defeated and the Euro populists hitting what looks in the movie to be a peak. Throughout it all, Bannon keeps his stubbled chin high, even after being defenestrated from Breitbart and losing his Mercer family funding in early 2018 after Michael Wolff’s Fire and Fury showed him exhibiting insufficient fealty to the glory of Trump. (Though Bannon clearly thinks of Trump as, at best, a useful idiot, Klayman doesn’t have the journalistic chops to get him to cop to it on camera; hers is a more insinuative and less confrontational style of political documentary.) The Brink suggests somewhat strongly that the fight is maybe more important than victory for Bannon. One especially effective segment intercuts footage of chaotic unrest in Europe, including images of Germans chasing down refugees in a kind of impromptu purge, while one of the architects of that chaos zooms high above in his private jet.

Like the most successful trolls, Bannon has mastered the art of turning a face of pure sincerity to those he considers less sophisticated and delivering his fire-and-fury sermons with a wink to the writers he so loves being interviewed by. Klayman stitches together a montage of Bannon in a series of MAGA hat-filled conference rooms declaring “divine providence” was responsible for Trump’s election. To Klayman, or around his crew of Breitbart editors or Politico writers, Bannon is more prone to wry sarcasm, such as his pondering semi-seriously about a pro-Trump film he’s just made, “How would Leni Riefenstahl cut that scene?”

But when he’s on the spot, Bannon can’t always wiggle out of it. When a Guardian reporter tries to pin him down on his “globalist” George Soros commentary being an anti-Semitic dog whistle, Bannon manages an uncharacteristically weak defense, leading the reporter to snap, “You need to stop smirking.” But he can’t. This fight is the game of Bannon’s life. He’s putting everything he has in to it, to the point of musing to Klayman at one point about whether there’s even a purpose for having a “personal life.” But it’s still a game.

Review: A Vigilante Is a Revenge Film with Delusions of Grandeur

Review: The Dirt Doesn’t Fulfill the Self-Flattering Promise of Its Title