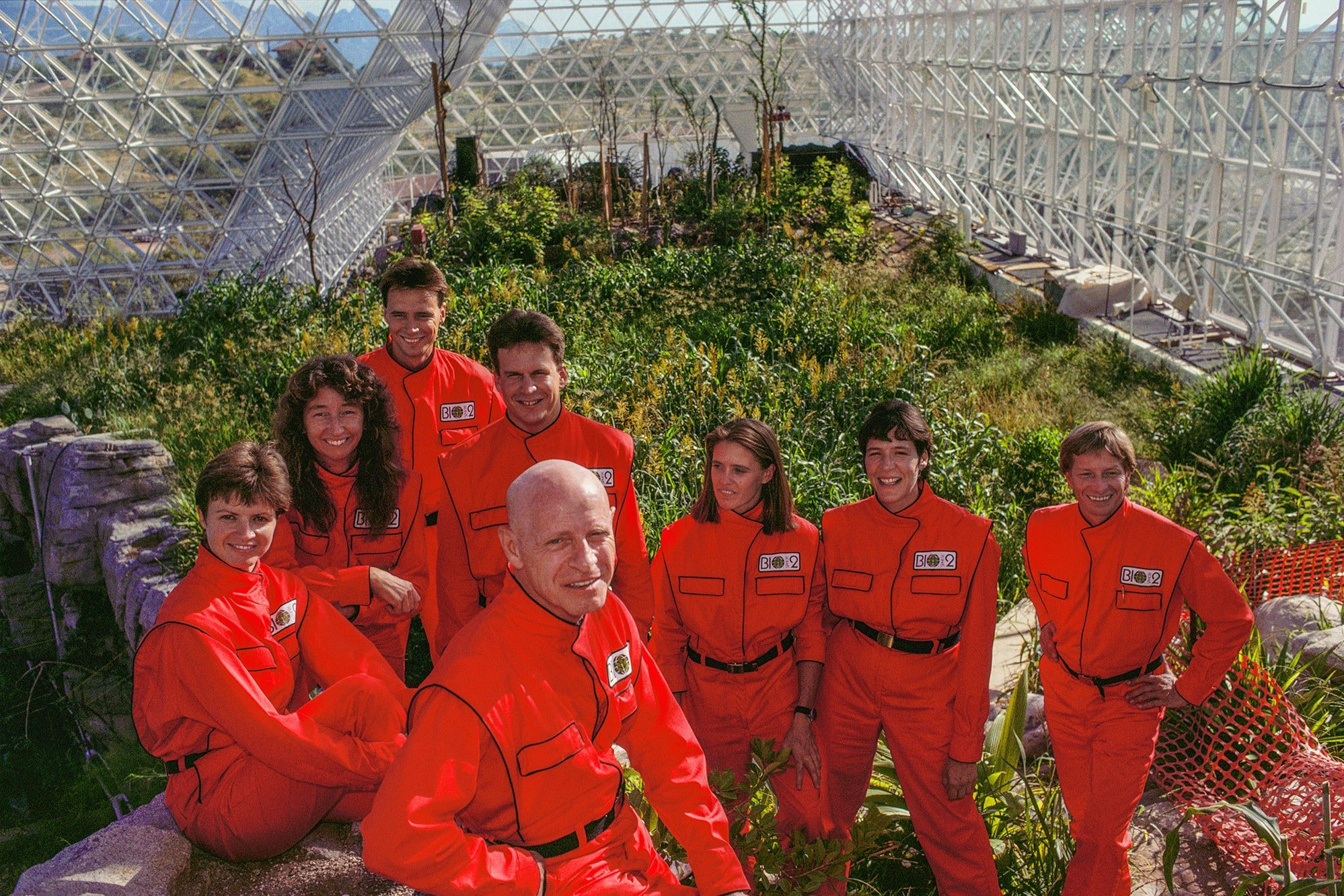 Matt Wolf’s documentary Spaceship Earth offers a shock, reminding us of an epic social and scientific experiment, Biosphere 2, that today is mostly forgotten. Twin Peaks, another pillar of early-‘90s arcana, has seemingly never exited our discourse, while a real-life attempt to create a self-sustaining atmosphere within a three-acre building—anticipating life in space while also grappling with the destructive human footprint on Earth—has been reduced to a jokey footnote. This amnesia says something unflattering about a society that hasn’t confronted climate change, and which doesn’t seem to dream anymore, as we are marred and distracted by increasingly tribal politics.

The subtext running through Spaceship Earth conjoins it with Wolf’s prior film, Recorder: The Marion Stokes Project. Here, Wolf again weaves together vast amounts of archive TV footage, showing just how much and how rapidly our consumption of media has changed over the last few decades. Perhaps we are less capable of nurturing vast ambitions as a society because media has become so niche-based, dividing and bombarding the populace with stimulation so varied and unceasing that it serves to essentially cancel itself out.

Wolf springs a surprise for people who’re foggy on the details of the Biosphere 2. The Arizona facility wasn’t run by NASA or any branch of the government, but by a group of eccentric flower-child intellectuals led by John Allen, a Harvard graduate who’s described by many interviewees in the film as a genius. The full first hour of Spaceship Earth is devoted to the union of Allen’s group, which formed a long-running theater troupe, ran an art gallery, constructed the still-running Synergia ranch, and built a fully functional sea vessel entirely by themselves. Soon, Allen was hosting symposiums with notable professionals from many disciplines, examining the different realms of Earth and the effects of climate change. These events, and sci-fi novels and movies like Silent Running, were the seeds for Biosphere 2.

For a while, the documentary is vague on matters of money, almost inadvertently inferring that Allen and his group were completing these visionary projects on commitment and daring alone. Eventually, though, Wolf reveals that Allen had a patron, Texas billionaire Ed Bass, who was pivotal to the realization of Biosphere 2. It’s also observed around this point that Allen, like many artists, had to adapt capitalist instincts for survival; for instance, the art gallery was a success, as Allen and his colleagues had a talent for networking and for erecting and nourishing their own miniature corporate infrastructure.

Throughout Spaceship Earth, Wolf suggestively unearths details about life in the Biosphere 2, where a group of eight professionals lived from 1991 to 1993. The group’s physician, Roy Walford, obsessively filmed inside the facility, capturing footage of the simulated rain forest, the wetlands, the ocean complete with collected coral reef, and the farm that produced almost 90 percent of what they ate. (Other footage, namely a POV shot of a diver descending into the ocean to examine the reef, is especially extraordinary.) We learn that the crew fermented wine from bananas, which was consumed too fast to age well, and that someone perfected birthday cakes without the benefit of sugar, butter, or oil. Beets grew better than some crops, and became, tediously, a lifeline for meals. Resurrecting this once-hot news story, Wolf fashions a sci-fi film that’s bracingly, unusually concerned with quotidian details.

Wolf is disappointingly vague about certain elements of this mission, perhaps out of misplaced good taste. Most pointedly, the viewer may be left wondering about the sexual dynamics of a forced living arrangement that included two couples. And while Wolf acknowledges the controversies of the Biosphere 2 project—Allen was accused of being a cult leader, and the facility wasn’t self-sustaining, as well as viewed by many in the scientific community as a showy tabloid spectacle—he brushes through these episodes, clearly smitten with this team’s daring. It’s also a shame that Allen, who appears in the film in new as well as archival footage, isn’t really pressed about his reputation as a manipulator adverse to transparency.

This admiration on Wolf’s part is understandable though, as these people did something grand and visionary that tickles the imagination while broaching in extremis the issue of our Earth’s decline. Spaceship Earth offers a refuge of idealism and intellectuality in an age that’s actively hostile to both of those qualities, though it ends on a bitterly ironic and prescient note.

Allen is eventually banished from the Biosphere 2 in a house-cleaning designed to render the endeavor more profitable, replaced by Steve Bannon, who said at the time, with characteristically toxic braggadocio, that he “kicked John’s ass.” Allen nevertheless left a mark, as Biosphere 2 is now a research and testing facility for the University of Arizona. Meanwhile, Bannon’s profound mark on society is better described as a stain. His divisionary tactics and fabricated media assaults are among the many reasons that we may never unite to answer the questions, riddles, and challenges posed by Biosphere 2.

Review: The Wolf House Is a Trippy Evocation of the Mechanics of Fascism