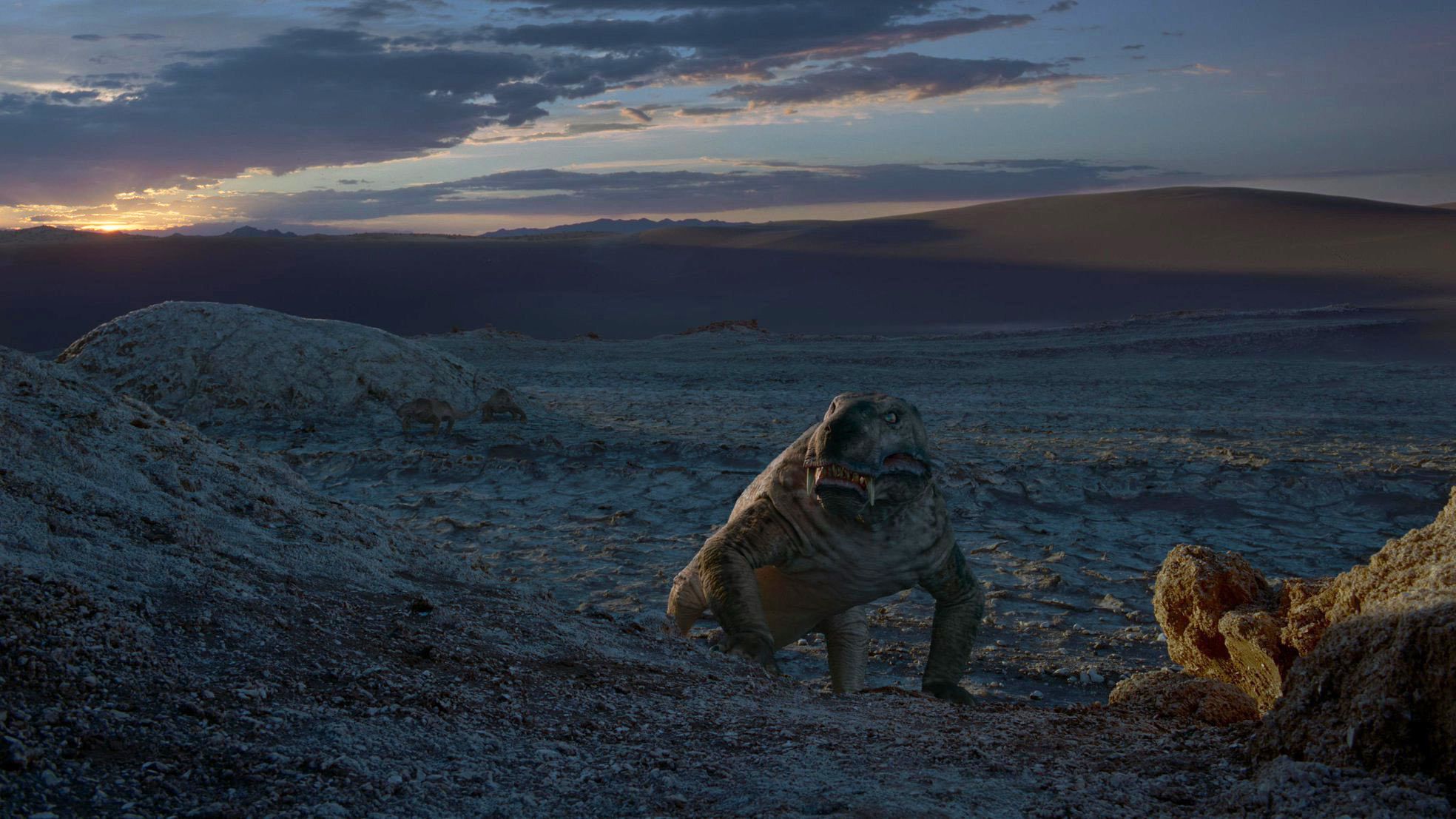 As with Terrence Malick’s most recent works, To the Wonder and Knight of Cups, the most alien visions in Voyage of Time: The IMAX Experience aren’t those of swirling galactic detritus or primitive sea animals, but those from our contemporary, built environment. The Burj Khalifa, viewed from the night sky above Dubai, looks like an astonishing and abstract assemblage of black-and-white panels molded into a spire. An otherwise unremarkable industrial complex seems to have one inhabitant: a little girl in a dark dress playing with a rock. Obsessively manicured suburban lawns are notably absent of life.

These images (photographed by Paul Atkins) dislocate in a way similar to the shots of a Sonic Drive-In in To the Wonder or Christian Bale wandering Skid Row in Knight of Cups, somehow elevated from everyday landscapes into richly aestheticized philosophical queries. How did we, as a people, arrive at this moment? How did we come to a world that looks like this?

The 45-minute, Brad Pitt-narrated version of Voyage of Time seeks to answer these questions in a manner that’s simultaneously expansive and pro forma: The present moment is but a little twig growing off of a long branch of the tree of life. As ever with Malick’s recent work, this holistic vision of a universe guided by scientific and spiritual designs is as easy to malign as it is to get swept up in. Aiding this temptation is Pitt’s narration, always solemnly dazzled and stuck in a syntax where pregnant pauses scan as aural colons: “What is it—this miracle, this gift?”; “The end—one with the beginning”; “What binds us together, makes us one: love.”

If such reveries brand Voyage of Time as a singularly Malickian nature doc (a question worth debating, as there’s very little moral or spiritual reckoning in this tightly packaged, family-friendly vision), the film’s imagery is unexpectedly tame. There’s little questing and a decisive lack of ambition in the camera movement, which broadly amounts to a series of slow pans across stunning Icelandic and Chilean landscapes. The birth of the universe is captured with the high-definition slow motion of a fast-food commercial, while proto-mammals and another crop of benevolent dinosaurs appear strangely indistinct. (Like these animals, most of the film’s outer-space and microbiological structures were created on computers.)

The film seems most at home in the water, calmly observing the controlled, ecstatic chaos of glistening schools of fish, the methodical pulsations of a field of jellyfish, or a beluga whale whose skin is as scratched and defamed as a schoolchild’s desk. These shots best capture our world as systematic yet miraculous, evolving toward more elaborate and resilient forms.

Explicitly addressed to a child, the film can’t help but feel like a primer for what’s said to be a more ambitious and intellectually speculative vision: the 90-minute cut of Voyage of Time, narrated by Cate Blanchett and subtitled “Life’s Journey,” which recently premiered at the Toronto International Film Festival. The longer cut appears to recycle some of the narration of this production, but incorporates a broader swath of contemporary experience—cellphone recordings of religious ceremonies and urban life across the globe—into its purview.

It will be interesting to discover whether this yields a thornier vision of the last few billion years, one where love and evolution have to grapple with random and unforgiving calamities. But with Voyage of Time: The IMAX Experience, Malick doesn’t let solar flares and meteors do much to disrupt his thin but winningly awestruck narrative.