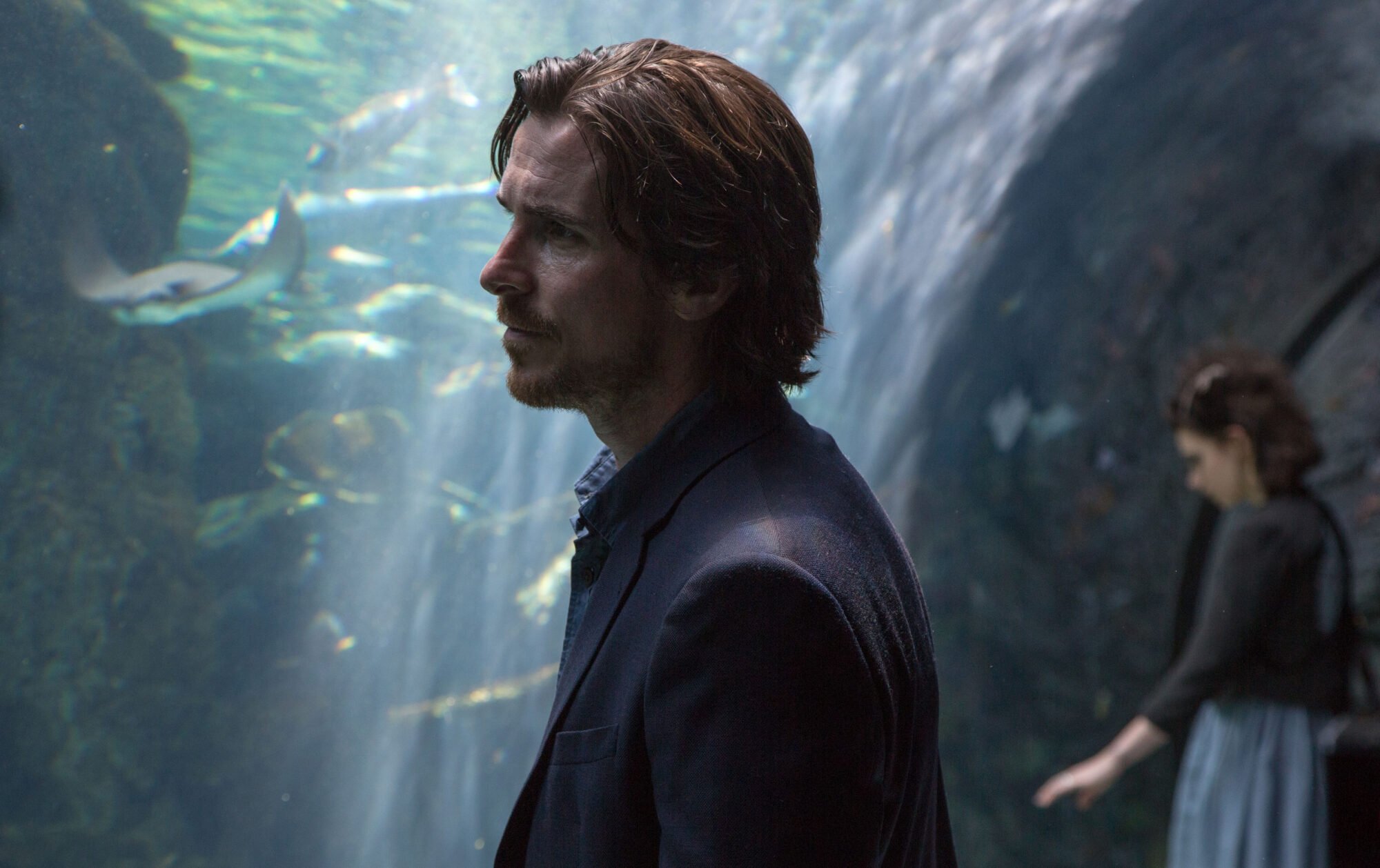 Like Reminiscences of a Journey to Lithuania, Jonas Mekas’s filmed expedition to a family gathering in his homeland, Terrence Malick’s Knight of Cups operates like a diary film, right down to the use of chapter titles to organize the plethora of footage recorded in Los Angeles. Where Mekas soberly planted day markers into his impressionistic sprawl, Malick gives us tarot card-inspired slates like “Judgment” and “The Tower” to loosely contextualize the wanderings of a melancholy hedonist, Rick (Christian Bale), who’s less a conventional character than a mute compass for Malick and DP Emmanuel Lubezki’s exploratory camera. And while Mekas’s project sprang from a desire, as an expat middle-aged New Yorker whose tender disposition always seemed at odds with his hectic city of residence, to reconnect with his familial heritage, the latest from American cinema’s mild-mannered outsider also functions rather transparently as an act of self-therapy.

Glimpses of the hermit-like Malick are more common now than they were back when he was covertly doctoring scripts during his two-decade directorial hiatus, but it’s fair to assume that he probably never looked as runway-ready as Bale’s shaggy-haired ladies’ man. Still, enough parallels exist between Malick and his protagonist to infer a degree of self-representation. Like Malick in the ‘80s and early ‘90s, Rick trades time between screenwriting and an assortment of other high-profile business endeavors, none of which he takes evident passion in. He also has a turbulent relationship with his father (embodied here by Brian Dennehy as a waddling scrooge) that’s shadowed largely by the suicide of a younger brother years earlier, as well as by the corresponding instability of the other surviving brother, Barry (Wes Bentley). Telling as these particulars are, the skeleton-key detail in terms of locating Malick’s DNA in the film is Rick’s apparent youth in the Midwest, suggested in a DV-shot flashback sequence by a fleeting glimpse of the Gateway Arch and a freeway sign indicating the route to Illinois, Malick’s birthplace.

Knight of Cups, however, has the uncanny quality of an out-of-body experience, not a torn-from-the-heart confessional. Rick’s existential dilemma is summarized by an introductory narration by Dennehy that tells of a prince dispatched to a sin-filled Egypt to retrieve a pearl requested by his king, a mission stalled by the son’s indulgence in worldly temptations. The equivalency draws out an allegory from John Bunyon’s The Pilgrim’s Progress (composer Ralph Vaughan Williams’s opera adaptation of the Christian parable provides much of the film’s musical leitmotifs), and it efficiently situates Rick’s narrative challenge—to overcome his midlife crisis—in theological rather than psychological terms. As posed by the allegory, the seductive women and material excess of Rick’s SoCal lifestyle are vices to be resisted, for their heedless embrace only yields suffering.

What’s intriguing about Knight of Cups, though, is that its filmmaking doesn’t so tidily adhere to this ethical framework. Instead, it exists well within that familiar Malickian battleground where intellect and schema spar with sense and intuition. One of the enriching qualities of Mekas’s diaristic filmmaking is the palpable curiosity he takes in whoever or whatever passes in front of his camera, and it’s a trait Malick shares. He films landmarks both obscure and well-trod—the Aquarium of the Pacific, the Warner Bros. lot, Skid Row, the Venice boardwalk, Huntington gardens—as though they’d never been seen before, with a wide angle lens ensuring the grandest field of view and constant Steadicam movement excitedly scanning surfaces so that the existing light might suddenly transform the objects being photographed.

The same rapt fascination applies to the people who populate Rick’s narrow cultural orbit. It’s true that Malick continues to portray women almost solely as leaping and bounding erotic fairies, but he’s also clearly left the business of developing so-called three-dimensional characters. Within this new lexicon he’s created, to be physically alive and energized is the noblest remedy to philosophical stagnancy. The models, dancers, and performers Rick shares relationships with (played by Imogen Poots, Teresa Palmer, Natalie Portman, Isabel Lucas, Cate Blanchett, and Freida Pinto) almost uniformly carry a spark that, when posed against his mopey stillness, reframes them as anything but disposable beauties, and Malick responds to their lithe physicality with an equally dexterous eye that’s less salacious than sculpturally inclined. To suggest these exultant visions of beauty constitute a reflexive confirmation of existing stereotypes of Los Angeles as a vacuum filled with pretty airheads speaks more to the biases of the accuser than to those of Malick.

Still, though, there’s the big question of the film’s tapestry of internal monologues and textual recitations, which by and large reinforce Bunyan’s rudimentary binaries. Bale’s torrent of dejected line readings—“Where did I go wrong?,” “How do I begin?,” “How do I reach you?”—overemphasize a fundamental discontent that’s only further echoed by peripheral commentators (“You have a darkness in you…”). Meanwhile, “find your way from darkness to light” is the cheesiest iteration of a sentiment expressed almost constantly elsewhere, and if that weren’t enough, Malick brings in a priest to clarify that Rick’s suffering isn’t all for naught. If viewed only as the statement, dramatization, and resolution of a thesis, Knight of Cups is oppressively redundant, its endless variations more than sufficient to clarify the story’s rather easily digestible themes.

Looking at the film merely in this way, however, is willful simplification—the enemy of art appreciation. Closer viewing reveals that in its intensifying and refining of an impressionistic mode inaugurated by Malick with The Thin Red Line, Knight of Cups provides the most overstuffed aesthetic experience in his body of work, as the untethered montage of voices, symbolic imagery, and balletic choreography has been pushed to a wispy extreme in which there’s only a handful of instances of audio synchronized to action. Dramatic meaning has become exclusively a matter of proximity, distance, flatness, perspective, light and shadow, and not verbal exposition.

Sometimes rote visual metaphor gets in the way (an image of Rick’s father rinsing his hands in a sink of blood, or shots of Rick lunging at something out of his grasp), and sometimes we overhear some dialogue low in the mix that induces a cringe (“I just wanna feel something, man,” broods Barry). But like any diary, Knight of Cups is a soul-dump, defined by the odd obsessions of its maker. Its awkwardness and vulnerability coexist simultaneously, yet it speaks a sharpened language that no imitator could replicate.

Review: Songs My Brothers Taught Me