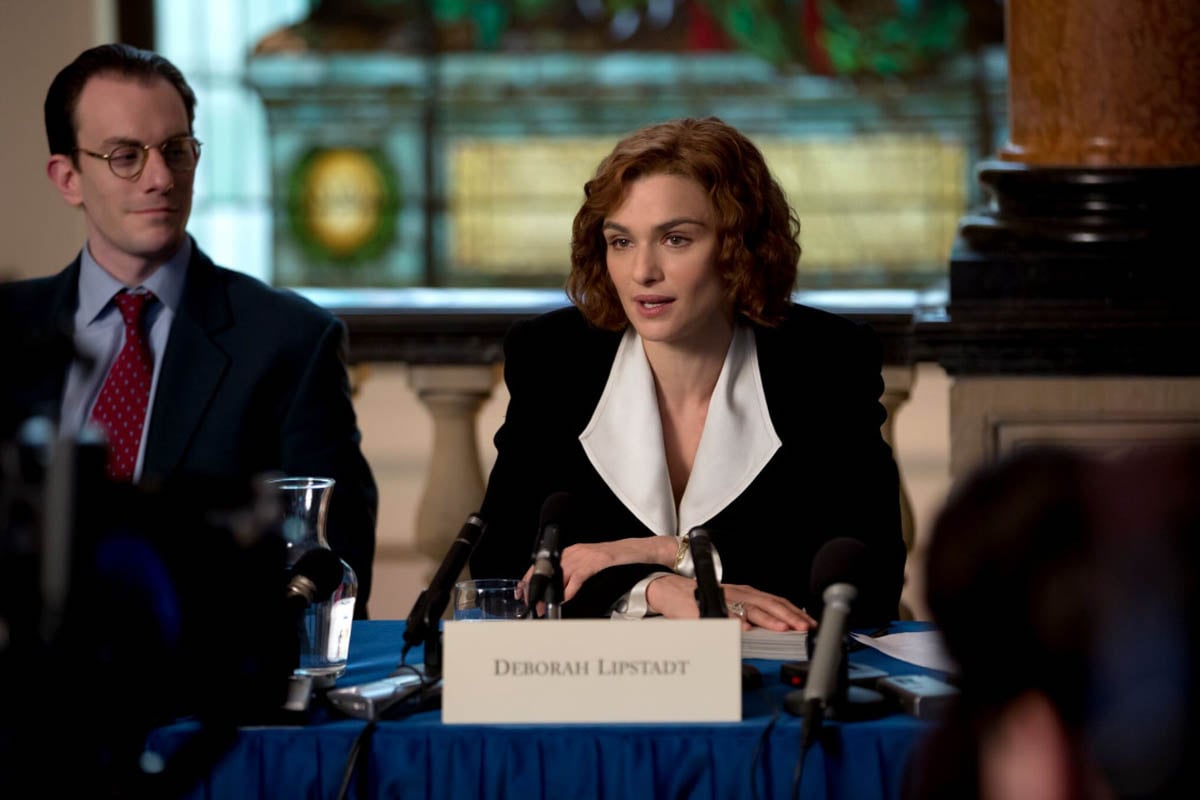 Based on the book by the noted Holocaust historian Deborah Lipstadt, Mick Jackson’s Denial dramatizes her infamous legal battle with the English Holocaust denier David Irving, a once reputable historian who sued Lipstadt for libel after she denigrated his work in one of her books. The film chronicles the case, which notoriously put the veracity of the Holocaust on trial, from its inception to the final verdict. The outcome of the trial forever ruined Irving’s professional reputation and served as an important precedent in the legal history of the Holocaust, whose existence was subsequently no longer deemed to be an acceptable topic of debate in a British court of law.

The film, written by playwright David Hare, is a passionate defense of fact over opinion. It’s a vindication of logic and reason against those that employ specious conspiracy theories to support all kinds of racist agendas. Ostensibly about the anti-Semitism that continues to lie, barely concealed, just beneath the surface of Western society, the film is more a celebration of the often unsung defenders of truth—academics, scholars, and activists—who put in untold hours of thankless labor to generate the knowledge upon which social and scientific progress depends. Equally, it’s about the need to debunk pseudoscience and lies that masquerade as facts, which are dangerous precisely because they offer a simplified view of the world that appeals to humanity’s need to make sense of our increasingly complex reality.

Denial humanizes Irving while never letting up on its attack of his abhorrent ideas, debunking them one by one until he’s a broken husk of a man, stripped of all dignity and credibility. As played by Timothy Spall, Irving is as a delusional social climber whose talents as a historian were increasingly perverted by his growing passion for the ideas espoused by Adolf Hitler and the Third Reich. Spall captures Irving’s fascinating combination of insecurity and braggadocio, showing him to be a patent racist whose hate was so deeply ingrained that he was incapable of seeing it. One almost feels sympathy for Irving when he pitifully denies being an anti-Semite, despite overwhelming evidence to the contrary, because he truly believes that his findings are based on sound scholarship. Blinded to how his prejudices have perverted his work, he’s a textbook example of a pathological bigot whose racist view of the world leads him to see himself as a victim of some vast conspiracy out to get him, when in fact he’s the one with the all-consuming agenda.

In a deeply sober film with an almost entirely British cast, Rachel Weisz’s performance as Lipstadt brings a welcome sense of verve and even a certain campiness to the proceedings. Both a complement to and the obverse of Spall’s Irving, Weisz plays up Lipstadt’s Queens accent and her general American brashness to highlight how foreign this English trial appeared to the Jewish-American scholar. As an American and the one being tried, Lipstadt is horrified by the British legal concept that one is guilty until proven innocent, the reverse of her native tradition. As a Jew and a Holocaust historian, she’s appalled that the burden of proof is on her, while the liar that accused her gets to make a mockery of both her profession and her tragic heritage.

And yet, like Irving, Lipstadt is an outsider to the pomp and regalia of the British court, refusing to bow to the judge and outraged at her inability—and that of the Holocaust survivors that she represents—to speak in her defense. Lipstadt, the daughter of a refugee from the Third Reich, and Irving, who grew up playing in the ruins of houses destroyed by the Nazis during their bombing of Britain, were both deeply scarred by the devastation of WWII. Lipstadt is verbally abused by anti-Semitic protesters outside of the court, while Irving has an egg thrown at him by one his opponent’s defenders. Striving to be accepted into the upper crust of British society, Irving lives in a beautiful home with a staff of housekeepers, but the film makes it clear that he’s nevertheless ostracized by his socioeconomic peers.

This is paralleled in Lipstadt’s dinner with several influential Jewish Londoners, who ask her to settle for a plea bargain, which infuriates the outspoken American, who responds that she never faced such resistance and stinginess from the Jewish community in her native country. In capturing both Irving and Lipstadt as outsiders whose victimization led them in opposite ethical trajectories, Denial shows that people’s misfortunes need not preclude them from living virtuous lives founded on basic human decency.