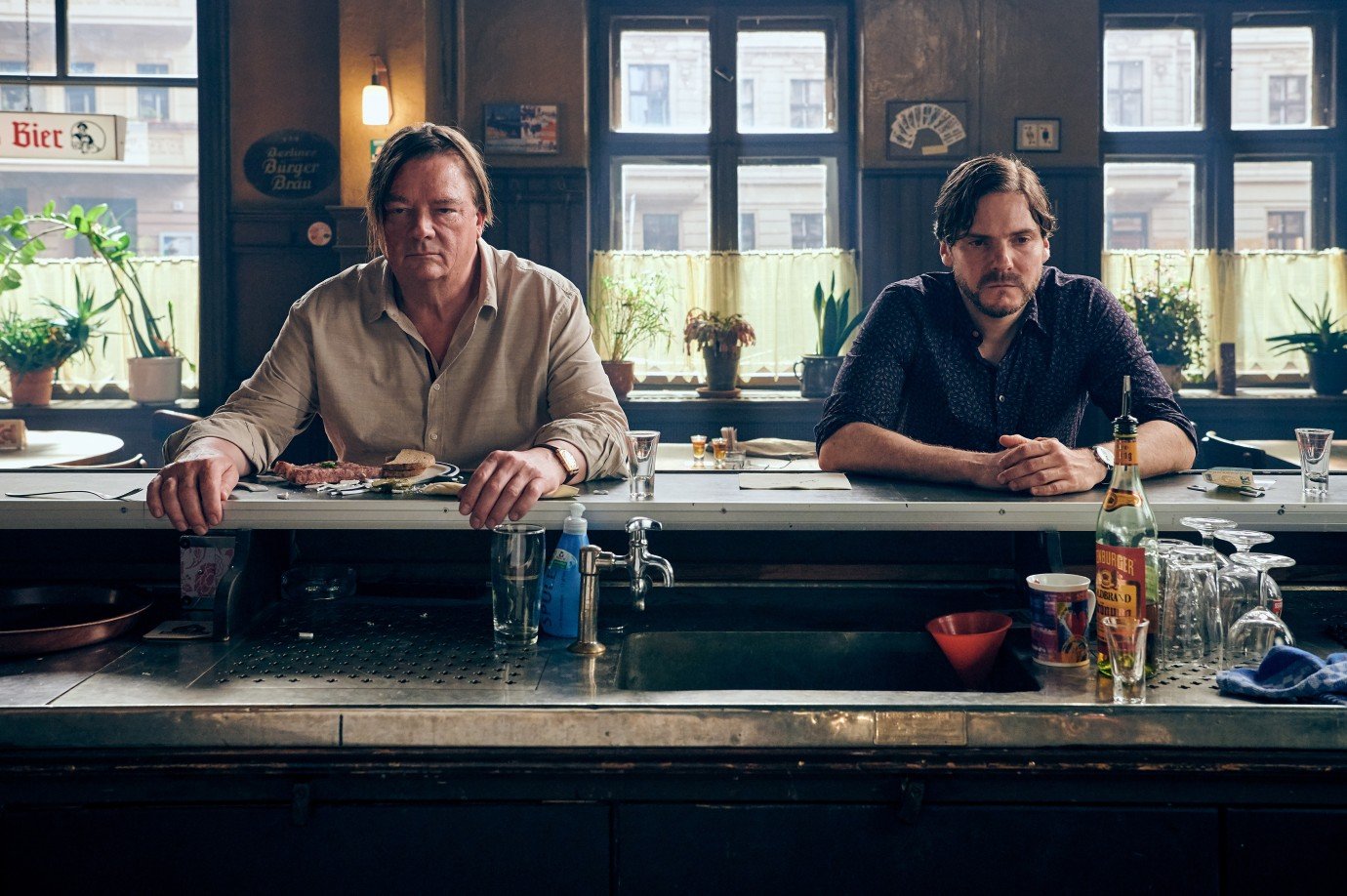 Fusing a contemplation of Daniel Brühl’s role as an actor in the global movie marketplace, and its attendant luxuries, with a revenge-of-the-repressed narrative, Next Door superficially resembles Sam Levinson’s Malcolm & Marie. But where that film was rigged to validate its writer-director’s on-screen surrogate, Brühl’s feature-length directorial debut proves to be authentically self-castigating. Brühl doesn’t indulge the faux-humility that pervades many Hollywood satires; in fact, Next Door is a ruthless satire of that very form of complicity, in which movie stars, and even everyday people, parrot politically correct bromides while living their lives as they please, oblivious to their surroundings, especially to the many underpaid quasi-servants who intricately enable middle- and upper-class existence.

Brühl plays a movie star named Daniel, who resembles him in various ways. Like Brühl, Daniel grew up privileged in Cologne and has prospered in show business. At the start of Next Door, Daniel is prepping inside his luxe Berlin apartment for an audition for a role in a top-secret blockbuster, bringing to mind his role in Captain America: Civil War. For a brief spell, then, we’re lured into thinking the film will be a fictionized riff on Brühl’s life, which will presumably hinge on the big audition, until a road block arises. Stopping at a bar on his way to the airport, Daniel is heckled by a regular, Bruno (Peter Kurth). The men offer a dramatic study in contrasts: Daniel is trim and groomed, having completed a morning ritual of exercise and sensible food, while Bruno is older, frumpier, and clearly accustomed to more robust breakfasts and a steady diet of beer. There’s nothing soft in Bruno’s gaze though, because from his first appearance in the film, the man radiates acidic intelligence and fury.

As the men engage in a battle of wills, Daniel Kehlmann’s script shrewdly toys with our loyalties. Daniel is a condescending shmuck who’s at the receiving end of the film’s subtlest jabs. At one point, he tells the bar’s owner that he’s glad she doesn’t have espresso, because it’s bitter and causes heart attacks, moments after we saw him drinking it at home. This sort of gesture is his idea of being humble, when a person who truly belongs in that bar probably doesn’t need to consider notions of humility. There’s also a sly running joke, first amusing before turning menacing, in which people—from the bar’s owner to his fans—enter the bar in the periphery of the frame without Daniel really noticing, which succinctly embodies his learned blindness to the proletariat, until the latter forces a reckoning.

Yet Bruno is very decisively not a working-class hero offered up for the sake of easy eat-the-rich sermonizing. The man is actively unpleasant, stewing in bitterness, and in his own way he’s every bit as entitled as Daniel, as evinced by the way he interjects himself into Daniel’s morning, insisting to the actor that his movies suck while insulting him personally. Daniel is quite justified in telling Bruno that his opinion doesn’t matter, as we recognize such statements as part of a well-honed defense for someone in the public spectrum.

Neither character is conventionally likeable, though both are arresting and relatable, collectively playing to both our envy and resentment of the social elite, which gives Next Door an anxious where-the-hell-is-it-going quality, even, and perhaps especially, when Daniel and Bruno’s conversations are placid and aggressive only in the passive sense. It becomes obvious early on that Daniel isn’t going to leave this bar and probably doesn’t even want to on a subconscious level, as the men use one another to exorcise their cultural demons. They come to find their mutual loathing companionable, and in this sense the film recalls many Hitchcock thrillers, especially Strangers on a Train, which also featured an agent of chaos named Bruno.

The script teases a variety of explanations for Bruno’s targeting of Daniel, most explicitly rooting his resentment in leftover tensions from Germany’s pre-reunification days. Bruno initially claims to be sympathetic to the Stasi, which, given East Germany’s financial destitution in relation to West Germany, would parallel the social divide existing between Daniel and Bruno. This conceit, though, is never examined at length, existing essentially as window dressing for a stalker scenario. Yet Brühl, wanting to honor the textures of everyday life, especially the way men enjoy luxuriating in their disappointments while getting soused too early in the day together, also never entirely commits to mining genre mechanics. Imagine Strangers on a Train without the ecstatic release of its set pieces.

Loose, under-explored ends continue to accumulate throughout Next Door’s second half, culminating in a finale that feels self-consciously incomplete. The resigned grace that the men achieve at film’s end, coming to terms with their desolation as the quality that unites them across vast social barriers, suggests a turning point rather than a conclusion, leaving us primed for a perverse buddy movie that never materializes. This irresolution is certainly in accordance with the film’s design, acknowledging the monumental inequalities that inform our lives, often without comment or catharsis. In Next Door’s case, such a conclusion works better in theory, seemingly existing as an exit strategy for filmmakers who couldn’t quite think of an ending.

Fabian: Going to the Dogs Review: Dominik Graf’s Shared Nightmare of the Past

Review: A Shape of Things to Come Is a Haunting Immersion into a Life Off the Grid