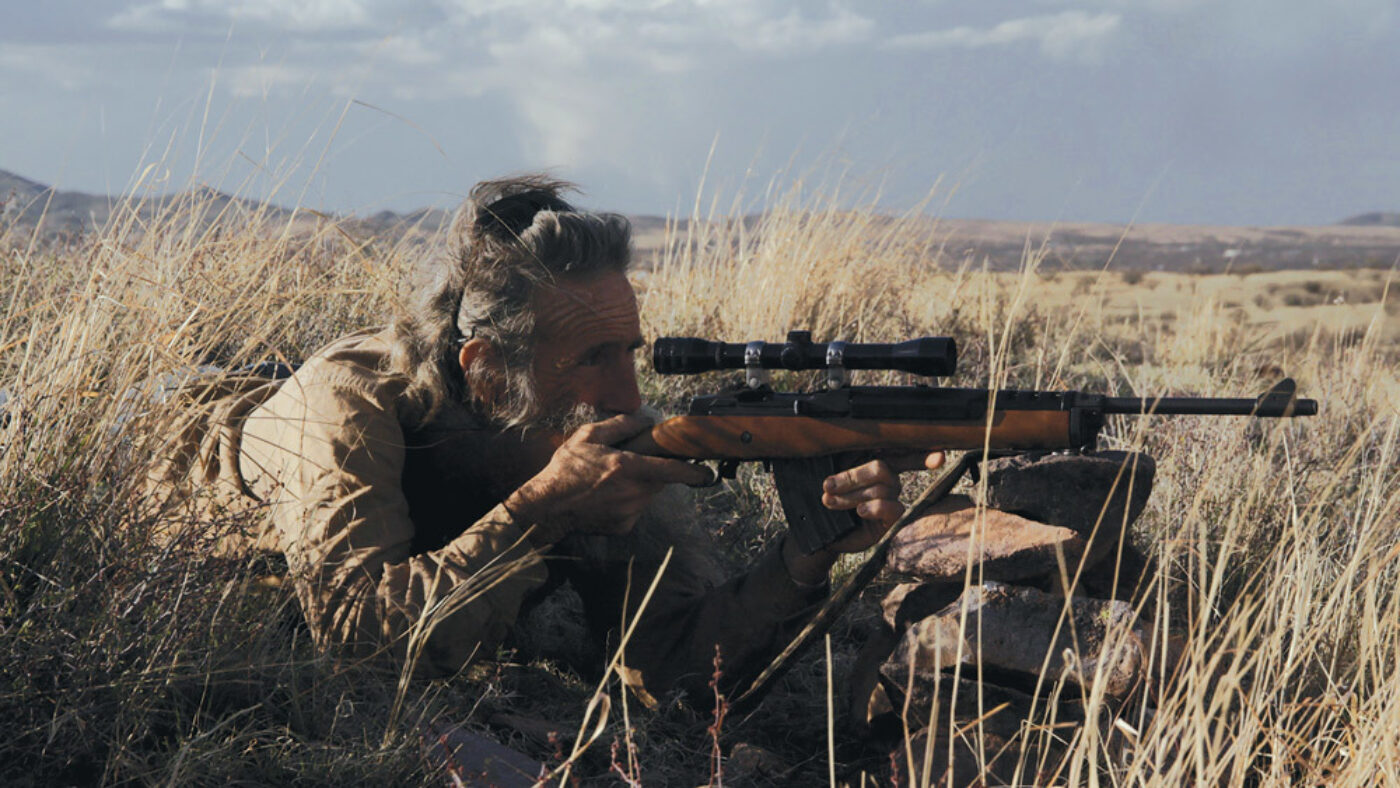 Lisa Malloy and J.P. Sniadecki’s A Shape of Things to Come suggests a fusion of an eco-documentary and a bleak acid western, and this disparity between genres results in a mysterious tension. At times, Sundog, the lean, bearded recluse at the center of the film, resembles a fun-loving hippie, drinking beer, dancing in a local bar, and reading novels and enjoying life alongside various animals in a makeshift ranch-slash-ecosystem in the Sonoran Desert near the Mexican border. Elsewhere, he appears to have real teeth, aiming a high-powered rifle at surveillance towers and surveying the Border Patrol vans with contempt while nonsensically muttering to himself. You may find yourself divided between enjoying the film as a celebration of a man’s self-sufficiency in an age where we’re deeply dependent on the grid, or fearing him as a self-righteous eccentric who, in his own way, embodies the very sense of social exceptionalism that he resents. For Sundog, it’s his way or the highway.

Much of A Shape of Things to Come is an engaging immersion into Sundog’s day-to-day life. The film offers a reminder of how fascinating the contours of various processes—in this case ranging from Sundog’s hunting and butchering of animals to his harvesting of toad venom in the middle of the night—can be when artists have the confidence to observe their subjects without having them fit a prescribed narrative. And this willingness to put aside traditional narrative parallels Sundog’s shunning of conventional society. Sundog’s life appears to be transcendently devoid of noise, of everything from the shrill constancy of advertisements to polarizing political discourse. One of the film’s most exhilarating scenes finds him simply taking a bath in an outdoor tub, hearing natural noises and savoring a moment of reflection and comfort. When he sinks down into the water, it’s as if he’s returning to the womb.

A certain expectation of violence, accompanied by an ambiguity regarding the circumstances of the film’s creation, prevents A Shape of Things to Come from becoming a soft and cuddly celebration of a fogey living his life on his own terms. Malloy and Sniadecki’s shaky cinematography exudes a beautifully neurotic quality that evokes Vincent van Gogh’s landscape paintings. In an early image, Sundog is shot in a canted angle as he walks among an assortment of plants, which suggest frantic brushstrokes, embodying Sundog’s restless headspace. The film also traffics in more obvious symbols, such as the foreboding shots of a sky rife with planes (emissaries from the corrupt and polluted world that Sundog has left behind) and of a rattlesnake that may as well be a temperature read of Sundog’s growing frustration with Broder Patrol’s surveillance programs. Such feverish moments, particularly a scene in which Sundog appears to commit a serious crime, call into question whether we’re actually watching a documentary or something closer to an experimental thriller.

Throughout A Shape of Things to Come’s 77-minute running time, Malloy and Sniadecki invite the audience to read all kinds of deep, haunting meanings into their film’s title. It could allude to Sundog’s blossoming madness, or to the madness of a metal and plastic world we’ve constructed almost out of spite to the natural one we inherited, or both. In this rather disturbing light, you may feel as if Sundog will succumb to the machine of corporate modernity, as his understandable rage may destroy his ability to enjoy the remarkable little sanctuary that he’s managed to carve out in the middle of an unforgiving patch of earth.

Review: Next Door Is a Ruthless Satire of Complicity, Artistic and Otherwise

Review: Raya and the Last Dragon Is a Gorgeously Rendered Celebration of Hope