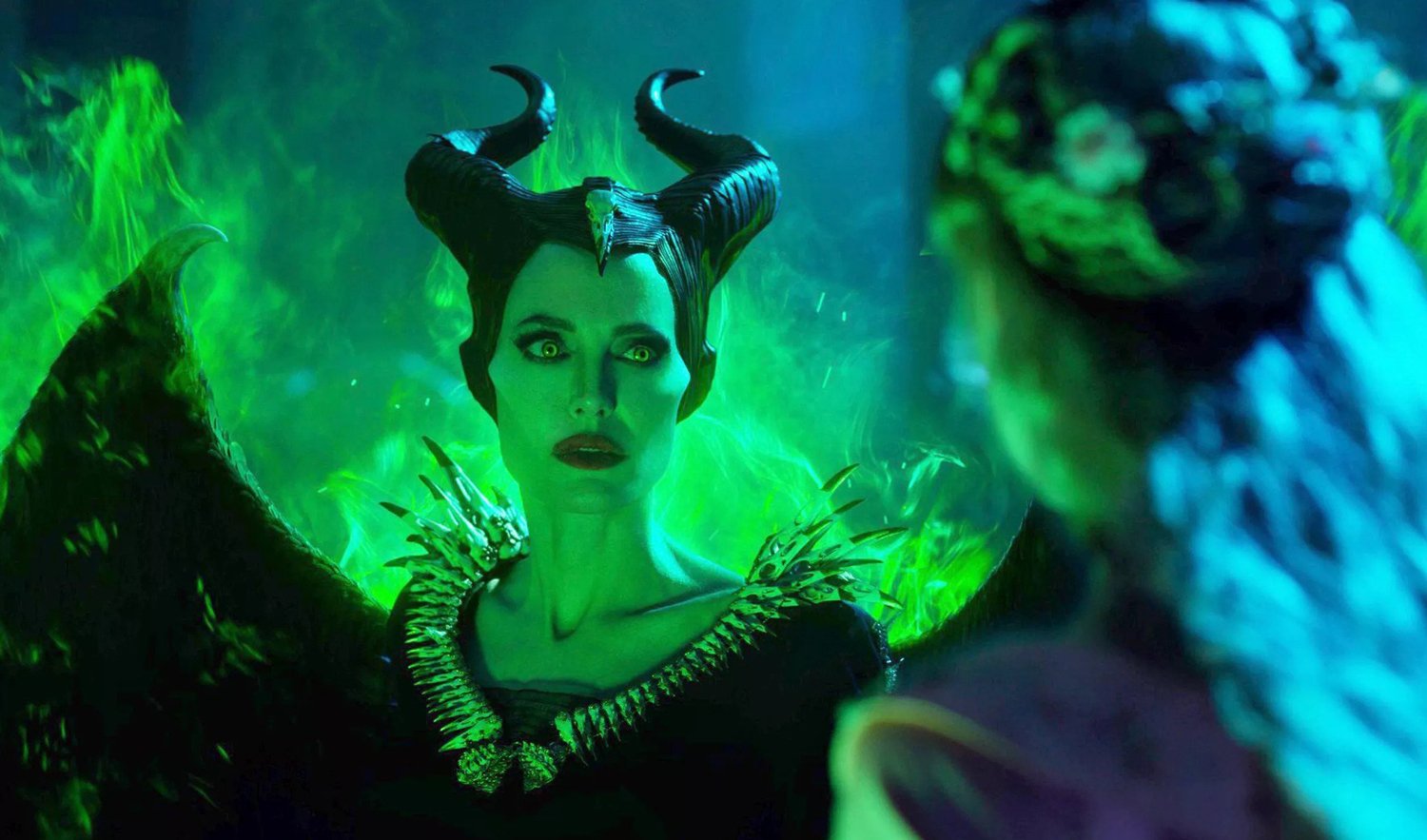 “Once upon a time…or perhaps twice upon a time, for you may remember this story,” begins the voiceover narration of Disney’s Maleficent: Mistress of Evil. To its credit, the film opens by addressing the elephant in the castle: that we, as modern filmgoers, surely know this story well, through all its incarnations as old-fashioned fairy-tale romance and as insipid CG action-fantasy. But this sequel’s attempt to deflect attention from its own tiresomeness only highlights the cynicism of a corporation that insists on franchising the reboots of its adaptations—on repeating the process of filtering the imaginative irrationality of folk tales through layers upon layers of calculation.

Angelina Jolie returns as Maleficent, once one of the most deliciously evil villainesses in the Disney canon, who now—like Oz’s Wicked Witch of the West—has been reduced to a mildly grumpy environmentalist. Disney has erected a mythos around the character to explain her malevolent deeds—or rather, to expose them as truly good. Channeling themes of historical revisionism and post-colonial white guilt, the Malefi-verse positions its title character as defender of the marshlands known as The Moors and its multifarious magical inhabitants, the Dark Fey, against the incursions and crimes of the late-Renaissance Europeans who live nearby. In the film, whose subtitle has virtually nothing to do with its plot, she’s supplied with an army of fellow Feys primed to resist the destruction of their native lands by greedy humans. The deviousness suggested by Maleficent’s occasional wry, sharp-toothed smiles and curling horns is hardly on display in her actions, which have thoroughly virtuous motivations.

Mistress of Evil posits a “true story” behind the official one recorded in the Sleeping Beauty fairy tale, as rather than persecuting the princess subsequently known as Sleeping Beauty, Maleficent has adopted her and raised her. Aurora (Elle Fanning), though she’s grown up among the Fey, has fallen in love with Prince Phillip (Harris Dickinson). Throughout, we’re given little evidence of their mutual attraction beyond the fact that they’re both young humans, though Joachim Rønning’s film does attempt to elicit our sympathies for their union with an early scene that stages a YouTube-ready surprise proposal. Though she harbors doubts about this union, Maleficent initially tries to play the good mother, reluctantly accepting the match. But then, at the engagement dinner, Phillip’s mother, Queen Ingrith (Michelle Pfeiffer), frames Maleficent for the sleeping curse that befalls King John (Robert Lindsay). Wounded in the subsequent confrontation, Maleficent flees and finds herself in an enclave of other vulture-winged, goat-horned Feys, led by Borra (Ed Skrein) and Conall (Chiwetel Ejiofor).

As played by Jolie, Maleficent is less a character than a pose. Rather than suggesting potency and confidence, the character’s impassiveness conveys indifference, a disinterested neutrality that emanates from behind Jolie’s green contacts and prosthetic cheekbones. Neither Maleficent’s anger at the humans who framed her nor her muted concern for the oppressed Fey succeeds in selling the clichéd plotline concerning indigenous rebellion. As debate rages in the ranks of the outcast Fey regarding a prospective uprising against the murderous humans—the screenplay, of course, makes Conall’s plea for a moderate response to creeping genocide more appealing than Borra’s call for a revolution—Jolie’s perpetually cool persona fails to anchor our feelings in the fate of the forest’s denizens.

The rebellious Fey recruit Maleficent for the same reason that the humans fear her: the magical powers she possesses. Yet Maleficent’s powers are ill-defined, the magical green tendrils that extend from her hands little more than a reference to visual effects devised for Disney’s classic animated Sleeping Beauty from 1959. But aspects of the magic in Mistress of Evil still draw inspiration from its diluted source material: the Grimm brothers’ fairy tale classic that the animated film was based on. In that story, the wise woman’s curse not only puts the princess to sleep, but also freezes all life in the castle in place and envelops the structure in an impenetrable thorn bush. Many princes attempt and fail to forcibly enter the castle, hacking away at the bushes, but after a century, the brambles open up on their own, at last allowing a prince to enter the princess’s chamber, so to speak.

In Mistress of Evil, we see the character that Disney has dubbed Maleficent deploy similar magical effects to much less metaphorical ends: She freezes a cat in the air mid-pounce to protect her were-raven familiar, Diaval (Sam Riley), and she conjures up spindly thorn branches to shield herself and Chonall from a volley of crossbow bolts. The filmmakers, no doubt, see such references to the original tale as forms of felicitous homage, but in transforming folk metaphors into utilitarian attributes of an action hero, Disney exposes the emptiness of their product. The film arranges a marriage between fairy-tale motifs and a CG-algorithm-driven plot that’s as bland and arbitrary as the one it stages between its nondescript human couple, processing thorny folklore into smooth, consumable pop culture.

Review: Zombieland: Double Tap Shrugs Toward the End of the World

Review: Tell Me Who I Am Is as One-Sided as the Curated Lie at Its Center