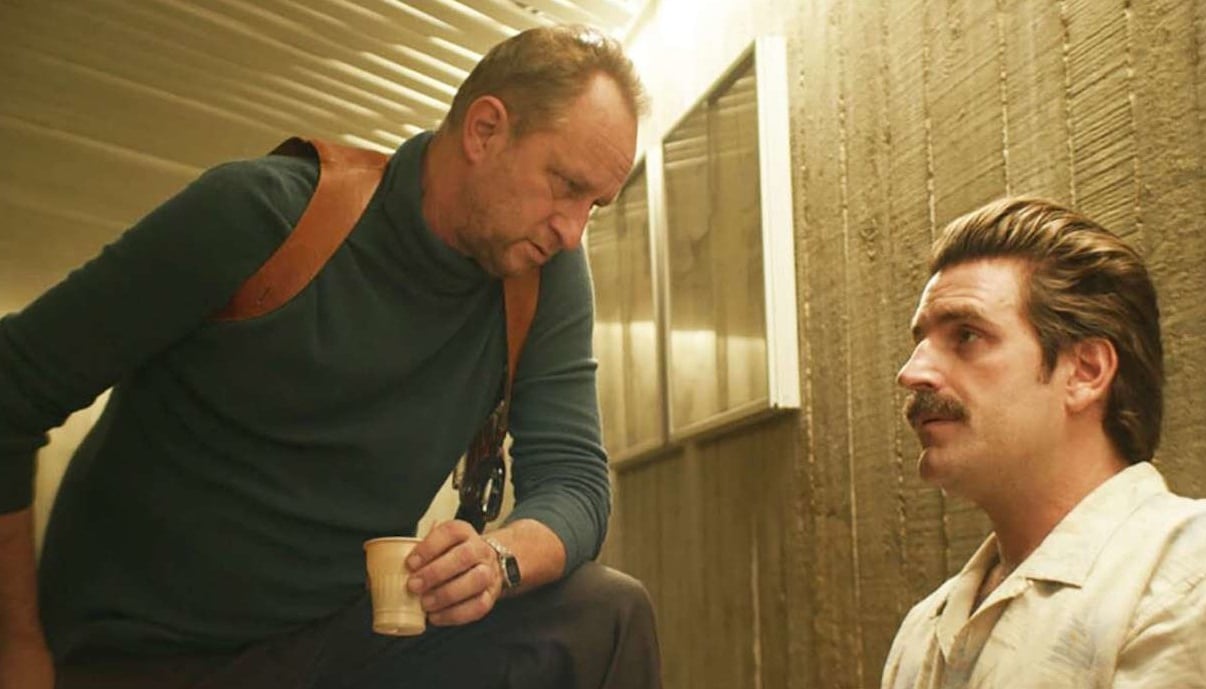 Quentin Dupieux’s films abound in hauntingly lonely compositions, boasting painstakingly structured narratives that pivot on dreams, flashbacks, absurdisms, and colliding and collapsing realities. Yet his craftmanship often seems to be utilized in the service of telling slight shaggy-dog stories that could be sketched out in their entirety on a cocktail napkin. With certain exceptions, most notably Deerskin, Dupieux’s films strenuously avoid arriving at a digestible theme or even a discernable point, which might be their reason for being. There’s almost always a sense of him taking the piss—exploiting or parodying our need to be hip enough to “get” the jokey futility and alienation of his work.

Such thoughts are certainly encouraged, perhaps merely as means of self-entertainment, during Keep an Eye Out’s many purposefully tedious and repetitive sequences. The film takes off from a straightforward and amusing idea: A detective named Buron (Benoît Poelvoorde) interrogates a suspect named Fugain (Grégoire Ludig) about a murder that happened near the latter’s apartment. The twist here is that Dupieux stretches this scene, familiar from so many cop thrillers, out to entail the whole of the film’s running time. Like the dinner party at the center of Luis Buñuel’s The Exterminating Angel, Buron’s interrogation of Fugain appears unable to reach a conclusion, as it’s prolonged by the rules of Keep an Eye Out’s game, which keep changing with an arbitrariness that’s alternately startling and studious.

As in many of Dupieux’s films, it’s the small, casual bits that really land. Early in the narrative, such as it is, Buron talks at length on the phone about trivial family matters while Fugain sits across his desk from him, waiting for the detective to get the hell on with the interrogation. Buron’s blithe self-absorption, reminiscent of a few of George C. Scott’s characters and expertly played by Poelvoorde, is often funny and keeps the film going during its many dry stretches, as the more involved jokes are extremely variable in payoff. Given Dupieux’s general storytelling perversity—this is a man after all who made a film about a vengeful car tire—it should be no surprise that this variability also feels intentional, even pointed.

For instance, there’s a long, nonsensical setup for a preordained punchline involving an inept one-eyed cop (Marc Fraize), a sharp mathematical instrument, and a debate about stupidity and guilt that recalls a “who’s on first” routine. Typical of Dupieux, the laboriousness of this moment becomes the joke, and your escalating impatience with the obviousness of it all may be gratified by the unexpectedly swift and brutal final flourish. No need to spell things out, but the film’s title is assigned several meanings, some so intensely literal-minded that they do a loop-de-loop into the realm of the figurative. Less successful is a long anecdote about the seven trips that Fugain took on the night of the victim’s murder. Having characters routinely talk of the dullness of this story doesn’t relieve the fact that it’s all, well, so punishingly dull.

Aesthetically, Keep an Eye Out may be Dupieux’s most confident film to date. Boasting gorgeously lived-in, amber-hued cinematography, it very much looks the part of a “real” provincial French police procedural, and the sharp editing makes every line reading crackle. But to indulge what Dupieux would probably see as the most conventional and bourgeoisie of observations, the film doesn’t seem to be about anything, apart from the desire to imbue a trite genre scenario with a Kafkaesque brand of comic existentialism.

Keep an Eye Out lacks the emotional intensity of Dupieux’s Wrong and Deerskin, as well as, to put it lightly, Kafka’s own ferociously personal neuroticism. And its late-inning dive into alternate realities is a cheat of sorts, scanning less as a challenge to convention than as the act of an artist smugly painting himself out of several narrative corners. Yes, such maneuvers are of course intentional on Dupieux’s part and, again, part of the film’s no-exit infrastructure, but at a certain point one may be driven to frustratingly wonder, “So what?” Because there’s a fine line between mocking dramatic conventions and giving up on them.

Review: Mr. Bachmann and His Class Basks in the Wonder of Education As Collaboration