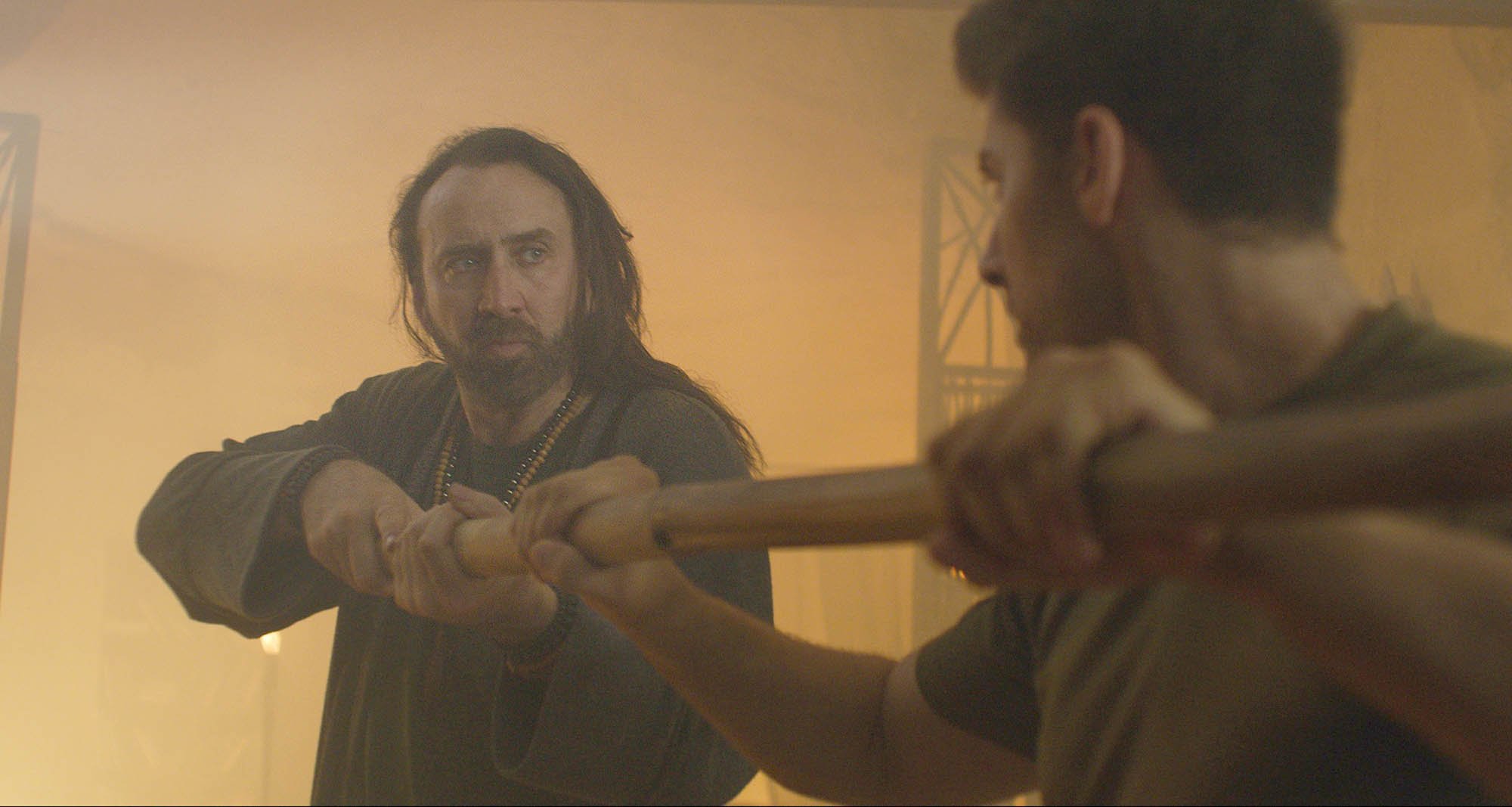 Despite his prominent placement on the poster, Nicolas Cage isn’t the central element of Dimitri Logothetis’s Jiu Jitsu. Rather, Alain Moussi plays the main character, Jake, a conveniently amnesiac fighter in a group that battles a silent interstellar warrior, Brax (Ryan Tarran), who emerges from a portal in a Burmese temple every six years, demanding hand-to-hand combat or else he’ll destroy the Earth. But for as much as that premise may suggest Predator by way of Mortal Kombat, the film doesn’t display the mounting tension and proficient choreography that would otherwise make the material sing.

From a technical perspective, large chunks of this sci-fi martial arts film don’t quite hold together. Logothetis uses longer-than-usual takes for several early action scenes, but the results are deeply unflattering to the film’s stuntmen since most of the characters’ blows look weak and unconvincing, while mediocre sound design and overuse of slow-motion only highlight the issue rather than disguise it. Throughout, ugly comic book art serves as transitions and occasional establishing shots. And strangest of all, the film fails to create a sense that the actors share the same space even in basic dialogue scenes.

Cage’s amusing turn as Wylie, an idiosyncratic hermit with an affinity for newspaper hats and an insistence on calling Brax “the spaceman,” often feels awkwardly spliced into the film. Most group shots show a stand-in from the back or at a distance, with all characters except Jake appearing to give him the silent treatment. Perhaps the most shocking moment in the film is a cut to Frank Grillo’s Harrigan finally, though still vaguely, reacting to something Wylie says after long stretches where the hermit might as well be Jake’s imaginary friend.

Still, Jiu Jitsu’s shoddy production isn’t without its diverting charm. For one, the film manages to offset Moussi’s void of charisma by bouncing him between more dynamic actors like Cage, Jaa, and Grillo, while Tarran’s portrayal of Brax as a guy in a suit rather than a CGI creation gives him a tangible, Power Rangers-like sense of presence. We even get a bizarrely memorable first-person sequence that follows Moussi until he momentarily steps out from behind the camera’s point of view, engages in a fight, and then seems to absorb the camera into his body as he’s knocked into the lens. Even though Logothetis succeeds at very little of what he’s experimenting with—he even botches a recreation of the Arnold Schwarzenegger/Carl Weathers handshake from Predator—it isn’t totally boring to see him try.

Review: Collective Is a Searing Chronicle of Institutional Corruption

Review: Embattled Is an MMA Drama Told as an Afterschool Special