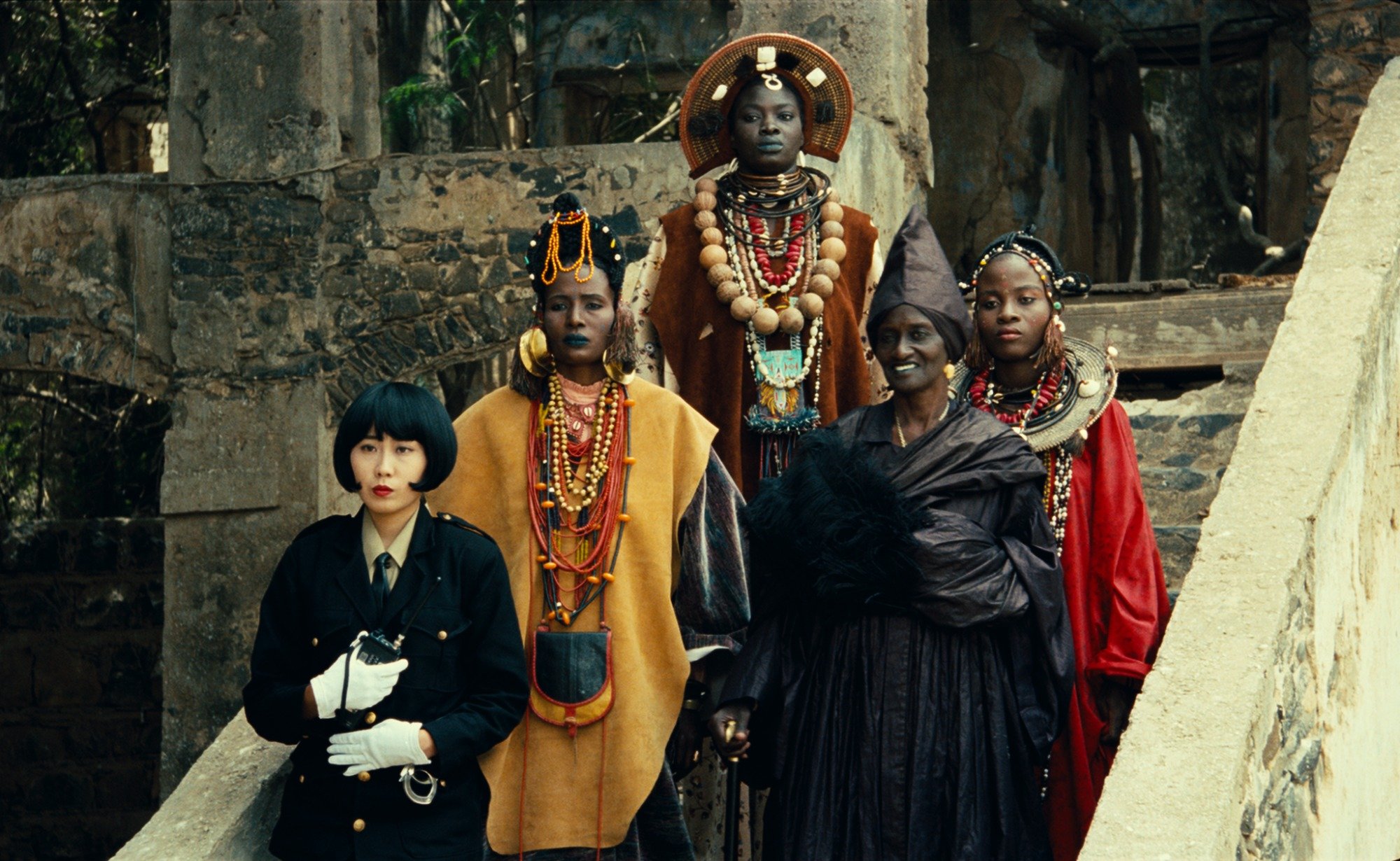 Djibril Diop Mambéty spared no one when mercilessly depicting populations who were simultaneously eating themselves from within and being exploited by the economic interests of outside forces. Mambéty’s great Touki Bouki from 1973 viewed this dual process through the prism of the postcolonial relationship between Senegal and France. And in Mambéty’s second feature, 1992’s Hyènas, Senegal is pitted against larger global institutions, such as the World Bank, that prey on small nations whose financial instability makes them more likely to embrace warped logic and false promises at their own expense.

Mambéty confines the proceedings to Colobane, a small commune in Dakar, where its population and governmental order are turned upside down by the return of former resident Linguere Ramatou (Ami Diakhate), whose newfound wealth has become a subject of much dispute and angst within the community. The woman, who’s said by locals to be “richer than the World Bank,” becomes Mambéty’s stand-in for how an institutional form of thinking, with its financial rather than human emphasis, corrupts local interests by vacuously promising short-term riches to citizens that, in turn, produce long-term financial crises.

One of Mambéty’s primary strengths is how his sense of detail instantly brings the locations of his films to life. Hyènas opens within the market owned by Dramaan (Mansour Diouf), a beloved local merchant whose generosity with patrons is almost immediately apparent, as he allows several customers to purchase expensive goods on credit rather than having them pay up front. Mambéty establishes each nook and cranny of the market’s space through a series of static shots that gradually reveal the amount of people—none of which offer payment for their acquisitions—toiling around the premises. When Dramaan’s wife (Faly Gueye) appears, and Dramaan says, out of her earshot, that she disapproves of his business practices, it’s the first suggestion in Mambéty’s carefully plotted script that mutual trust is the first casualty in the exchange of money between people linked to differing motivations. As the Colobane community takes even greater advantage of Dramaan later in the film, Hyènas further turns the man’s plight into an absurdist tale of capitalism’s follies.

Linguere’s return to Colobane provides the film with its driving plot device, as she announces to the population that she will pump hundreds of millions of dollars into the community in exchange for Dramaan’s murder. Linguere was abandoned by Dramaan years prior after giving birth to their daughter and has come back with the sole intention of wreaking havoc on the man’s life. At least, it initially seems that way; in a later scene, Linguere explains, “The world has made me a whore,” and so she plans to “turn the world into a whorehouse.”

Mambéty imagines how Linguere’s wealth co-signs her agenda of revenge; her dangling of expensive goods over the heads of locals hungry for their piece of the pie is akin to the lie of global monetary cooperation promised by organizations like the International Monetary Fund. Senegal, once again, becomes dependent on global rather than local sources of income and exchange. Mambéty, though, follows the thematic example set by Ousmane Sembène’s Xala, in which a Senegalese politician’s sexual impotence is a symbol of his corruption, by refusing to exonerate local officials within Senegal for their complicity in embracing Westernization. When Dramaan meets with Colobane’s mayor (Mamadou Mahourédia Gueye) to discuss the bounty that’s been placed on his head, the latter says, “[Leopold] Senghor himself went for a walk with the Queen of England…if we were savages, they would not come here.” By implicating the mayor’s deference to Western forms of knowledge and self-definition, Mambéty deftly wrestles with the complexity of corruption’s reach.

Despite its rather serious and finally tragic appraisal of Senegal’s quagmire within the world system, Hyènas resonates primarily for its lacerating comedic writing and pacing. As Dramaan comes to mistakenly believe that he will be elected Colobane’s next mayor, only to learn that, in fact, he’s more likely to be killed before an election takes place, Mambéty ratchets up the film’s ludicrousness to simultaneously critique the Senegalese government and widespread consumerism, and with equal ferocity. This is best encapsulated by the moment where Dramaan realizes that everyone who isn’t paying him seems to own the same, new pair of yellow boots made in Burkina Faso. Dramaan’s market, filled with foreign goods ranging from European tobacco to Coca-Cola, is itself exploiting its owner; the man has paid a high price for quality only for the local marketplace to abuse his ambitions.

These ideas also propelled Touki Bouki, in which a pair of college-aged youths from Dakar, a city adored with so many Pepsi logos and Mobil oil towers, (dream of migrating to France. In a memorable scene from that film, a pair of French professors dismiss Senegal’s local culture by articulating the distinctly colonialist logic of France’s superiority. While Hyènas forgoes such an explicit drag of French supremacy, the film’s lucid indignation and satirical take on Senegal’s raw deal proves just as convincing.

Review: Carmine Street Guitars Is a Beautiful Portrait of an Everyday Paradise

Review: Chasing Portraits Is Welcome Personal Testimony, but Its Scope Is Narrow