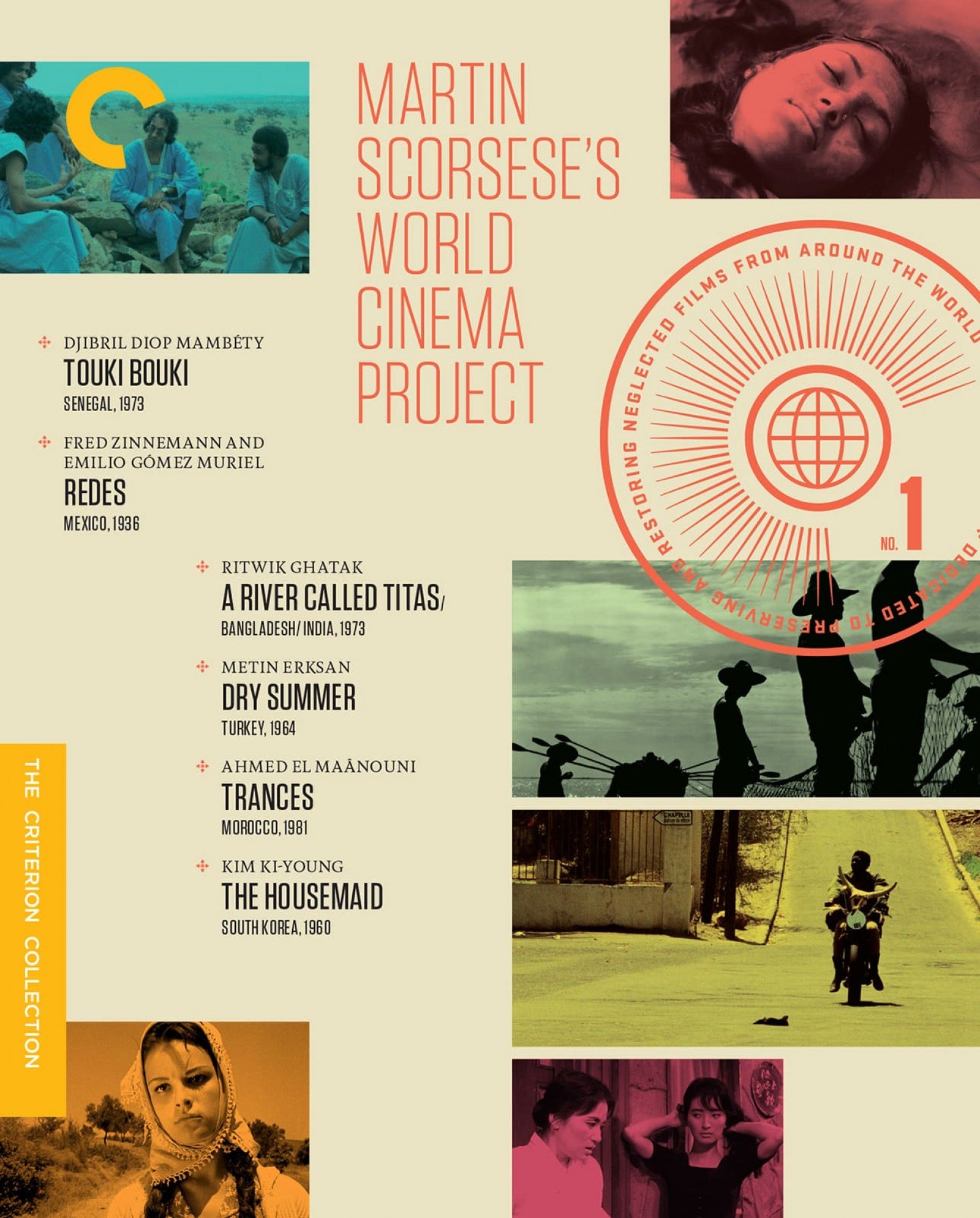 Martin Scorsese remains the most quintessentially American of American filmmakers. Save for a couple of stopovers in more exotic territory, the now 71-year-old filmmaker has concerned himself almost exclusively with the cultural trials and spiritual tribulations that have helped shape our modern social hierarchy. From the guilt-ridden intimacy of his 1967 debut, Who’s That Knocking at My Door, to the epic chronicle of economic larceny occurring among the financial elite in this year’s The Wolf of Wall Street, Scorsese has displayed an unparalleled obsession in his depiction of America’s dubious past, while managing to celebrate the moral and cinematic freedom that such a contradictory history affords. And yet it could be argued that Scorsese’s greatest gift to contemporary cinephilia has been his ongoing commitment to preserving and restoring important works from regions far outside our borders with the World Cinema Project.

Founded in 2007, the WCP (then known as the World Cinema Foundation, before joining forces with the Film Foundation, Scorsese’s other organization dedicated to celluloid preservation) has thus far restored over 20 titles from regions as far-flung as Taiwan, Romania, Senegal, and the Philippines. Their stated mission, to “support and encourage preservation efforts to save the worldwide patrimony of films, ensuring that they are preserved, seen and shared,” is certainly commendable, even vital. But it’s that final gift of exposing audiences to these little-seen films that will go some way toward fostering a larger dialogue concerning world cinema and hopefully encourage an interest in their contemporary counterparts. And so it goes that six of the initial titles restored by the WCP have completed the festival and repertory rounds over the last few years and are now experiencing just such an increase in exposure as they make their way to the digital marketplace.

The first WCP undertaking was Ahmed El Maânouni’s 1981 film Trances, and though ostensibly a music documentary with its own distinct intentions, it nonetheless encompasses many of the themes and preoccupations that Scorsese and his board of advisors have been drawn to since the project’s inception—namely that of working-class figures attempting to carve out an existence against a backdrop of economic and political hardship. Capturing a series of live performances and interviews with the Moroccan band Nass El Ghiwane, Trances bears witness to a band bringing an entire community together under the auspices of goodwill and humanity as they literalize the title of the film through minimalist protest songs of simultaneous unrest and encouragement. Part concert film, part regional essay, part meditation on the artistic plight, and thus not unlike Scorsese’s own The Last Waltz, Trances is both a snapshot of a bygone era and a celebration of communal spirit.

Also produced in a nearby region of West Africa, Djibril Diop Mambéty’s 1973 film Touki Bouki, one of the few titles associated with the WCP with any sort of international profile thanks to its director’s short but storied career, is deceptive in presentation and unique in its embrace of outside influences. While its narrative, concerning two young lovers who conspire to steal money in an effort at escaping their hometown of Dakar, is fairly familiar, its striking conceptualization, moving ably from feverish fantasy to stark reality via sharp editing and bold montage, remains invigorating and palpably passionate. Its allusions to Breathless and the Nouvelle Vague in general are unmistakable, but it’s to Mambéty’s credit that he’s able to balance his disparate thematic and aesthetic notions to such a degree that his appropriation of such a distinct style doesn’t dilute so much as add further depth to what’s at heart already a subversive tale of the figurative and literal integration of French culture into African heritage.

A less allegorical conflation of national cinematic identities is preserved in Redes, a 1936 Mexican-American co-production directed by Fred Zinnemann and Emilio Gómez Muriel. Shot by photographer Paul Strand, the film progresses with the immediacy of a documentary, contrasting scenes of seaside labor with the drama of a group of fisherman being exploited by local merchants. Without truly cohering into a narrative of any notable nuance, Redes still manages to predict what would many years later come to be identified with Italian neorealism (incidentally, another of Scorsese’s formative influences).

Despite emanating from wildly displaced countries, water also happens to play a key role in two other WCP titles, 1964’s Dry Summer, from Turkey, and 1973’s A River Called Titas, from India. Manifesting as both a monetary and metaphorical piece of day-to-day existence, these two films highlight the personal value of a natural resource we consistently take for granted. Dry Summer, which pits a greedy tobacco farmer against his neighbors in a struggle over proprietary entitlement, is the more traditionally plotted of the two: After cutting off the flow of water to areas surrounding his land, the farmer allows his brother to take the fall for a crime he didn’t commit before deceiving his wife into starting a new life without her husband. Comeuppance in Dry Summer is grave, and director Metin Erksan handles the vengeful aspects of his story without devolving into melodrama. Ritwik Ghatak’s direction of A River Called Titas, meanwhile, is less tightly coiled, more meditative, an appropriate approach for a film preoccupied with the existential concerns of a gallery of characters living along the shores of the film’s namesake river. Spanning an entire generation, the film utilizes its main character, Basanti, who endures a litany of tragedies and mundanities alike as she’s married off only to be sacrificed to nature’s unforgiving advancement, as a symbol for countless victims of Bangladesh’s partition era, when the division of India and Pakistan left thousands of people impoverished.

Consequences of a different sort conspire against the characters in South Korean auteur Kim Ki-young’s The Housemaid, from 1960, thus far something of an stylistic outlier in the WCP catalogue—and thus something of a key component. The rural adversities of each of the aforementioned films are here domesticated and heightened to near-feverish levels. A kind of psychosexual tale of obsession, The Housemaid is almost operatic in its depiction of a presumably mild-mannered housekeeper who takes revenge on her employer, his family, and anyone who might have the least bit of affection for the piano-playing patriarch. Formally quite radical, the film jumps perspectives, breaks the fourth wall, and just generally disregards conventional rules of storytelling. And it’s all the more exciting for this restless, near-baroque approach to narrative, a impulse that wouldn’t reach the States for a number of years, furthering solidifying one of the World Cinema Project’s other beliefs: that no matter the origin or means of production, the moving image continues to speak a universal language, and it’s up to us to keep it in the conversation.

Criterion has collected each of these six early restorations from the World Cinema Project—in each case either making their digital debut or arriving back in print—in a new box set, with two films included on each of three Blu-rays discs. Considering the impetus behind the WCP, it’s obvious that these films don’t exist in the best quality—hence their attention to the title in question. It’s therefore futile to expect pristine quality. Nonetheless, each of the films is completely watchable and likely looking as good as they ever will. Redes, the oldest of the lot, is mostly smooth with few scratches to note, though it does exhibit a generally softer look throughout. Dry Summer, A River Called Titas, and Touki Bouki, meanwhile, look sharp, with the black and white of the former pair producing pleasing contrast and a small patina of grain, while the color photography of the latter is rich and well balanced with only the requisite amount of noticeable artifacts typical for a ‘70s production. Trances, by contrast, was shot on 16mm, and certainly betrays some of the deficits of the format. But overall it’s been nicely cleaned-up, with no invasive damage hindering playback. Finally, there’s The Housemaid, which presented an interesting problem for the WCP. With two entire reels missing from the original negative, those sequences had to be recreated from the only available source, which happened to be a release print with burned-in subtitles. Not only are those scenes of noticeably inferior quality (rough, erratic, and desaturated), but the subtitles had to be digitally removed, which causes the bottom of the frame to blur throughout. For better or worse, and certainly no fault of Criterion (or the WCP for that matter), it’s likely the form this film will exist in from hence forth.

Audio is presented in each instance in linear PCM mono tracks, which given these films’ generally dialogue-driven narratives, means voices up front in clearly rendered mixes with limited dynamic range, but few instances of undue noise to hamper discernibility. Besides The Housemaid’s dramatic score, which sounds strong and sharp, the concert music featured in Trances provides the only real test for these sound mixes. But even in a linear transfer Nass El Ghiwane’s music comes through in robust, if not overly demonstrative, fashion, with no distractions populating the sound field. Like the image quality of each film, Criterion and the WCP have presumably done all there is to be done with the available source material.

Extras for each of the six films follows the same general format: a short introduction by Martin Scorsese wherein he outlines his history with the film and the challenges undertaken to restore the film in question, supplemented by a longer interview segment (or in the case of Redes, a visual essay) featuring someone involved with either the original film, its restoration, or the country’s respective industry. In these six cases that means filmmakers Abderrahmane Sissako (on Touki Bouki), Kumar Shahani (on A River Called Titas), Metin Erksan and Fatih Akin (on Dry Summer), and Bong Joon-ho (on The Housemaid), as well as director Ahmed El Maânouni, producer Izza Génini, and musician Omar Sayed (on Trances). There’s also a nicely collated booklet included featuring an essay on each film by Richard Porton, Charles Ramirez, Adrian Martin, Bilge Ebiri, Sally Shafto, and Kyung Hyun Kim, respectively, in addition to an introductory piece by critic and WCP Artistic Director Kent Jones.