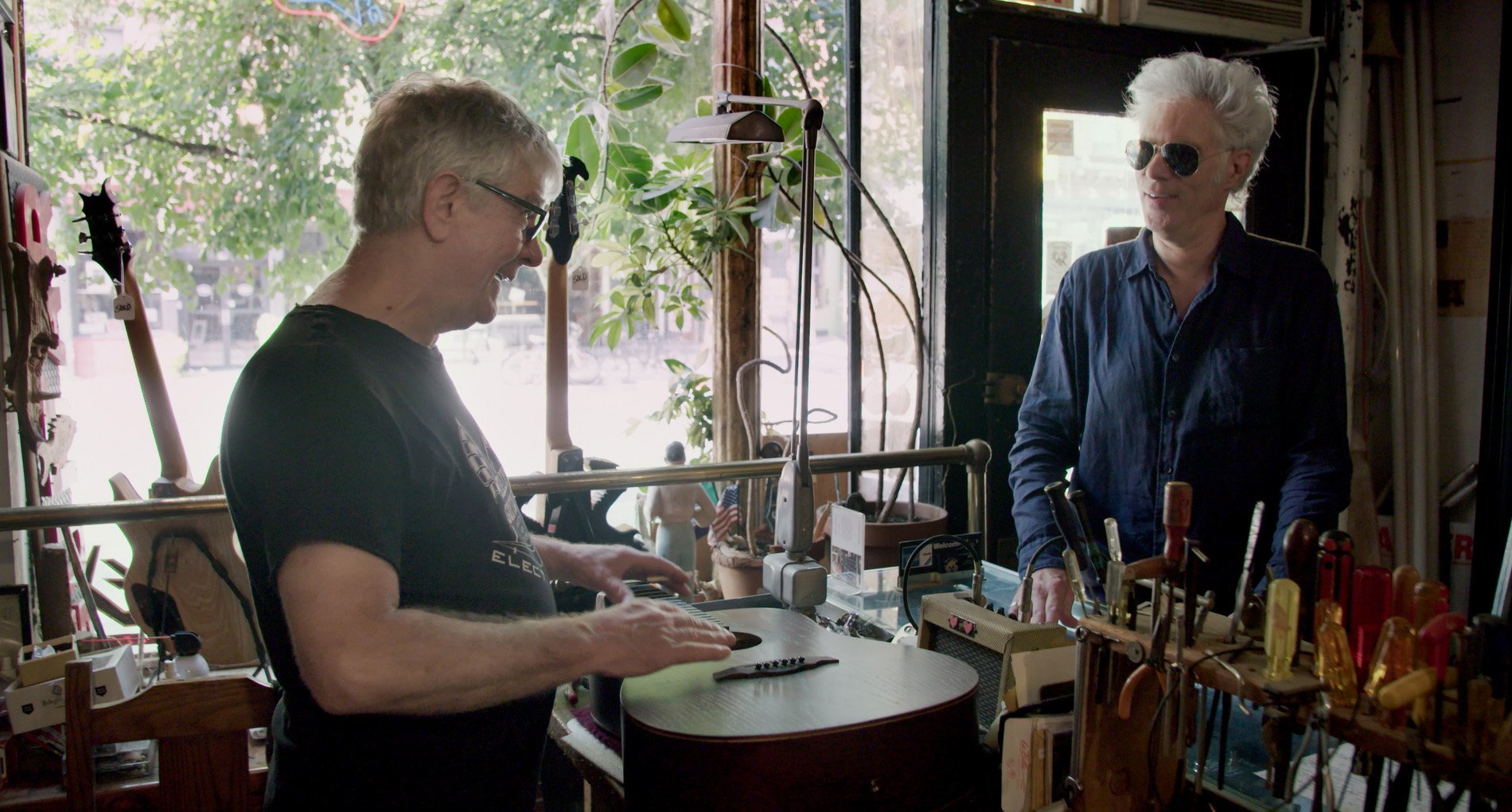 The concept of Carmine Street Guitars is simplicity itself. Director Ron Mann documents the legendary Greenwich Village guitar store of the film’s title over a period of five days, watching as mostly famous customers stroll in to peruse and play instruments and shoot the breeze with guitar maker Rick Kelly. There’s no voiceover, no overt narrative, and little orienting text—and none of the encounters in this film are structured or presented as info-bite-style interviews. Mann artfully sustains the illusion of someone who’s just hanging out, capturing whatever draws his attention. Consequentially, the documentary communicates the magic of this place even to someone who’s never been to New York City.

Mann has a knack for telling you more than he appears to be. Fashioning intimate compositions, he surveys Kelly and his apprentice, Cindy Hulej, as they build guitars together in companionable silence. Kelly and Hulej are a poignant study in contrasts: Kelly is a graying sixtysomething man with a bit of a belly, while Cindy is a lean twentysomething woman who, with her bright blond hair and multiple tattoos, suggests a rock star. Occasionally, Hulej will solicit Kelly’s approval for one of her designs or for the artwork or poetry she’s burning into the back of a guitar, which he grants with a humble hesitation that subtly says, “You don’t need my approval.” Meanwhile, up front in the store, Kelly’s mother answers the phone. At one point, she says she’s happy to be here, though, at her age, she’s happy to be anywhere.

Shots of Kelly and Hulej working also allow one to savor the tactility of Carmine Street Guitars itself. Hulej works to the left of the back of the store, while Kelly stays to the right of it. Above Kelly is a storage of wooden planks taken from various landmarks of New York, such as Chumley’s and McSorley’s. Kelly poetically says that he likes to build guitars from the “bones of New York.” The resin dries out in older wood, allowing for more openings in the material which in turn yields greater resonation. Such fascinating details arise naturally in the film’s images and conversations. Over the course of Carmine Street Guitars, Kelly fashions a McSorley’s plank into an incredibly evocative guitar, as the gnarled wood gives it the appearance of possessing scar tissue. Near the end of the documentary, musician Charlie Sexton walks in and plays this guitar, and the idea of scar tissue takes on a different meaning. Sexton, Kelly, and the store itself are textured survivors of another era.

This is never explicitly stated in Carmine Street Guitars, but the film offers an analogue daydream in a 21st century that’s been nearly gentrified to death by corporations. The building next to Carmine Street Guitars was once used by Jackson Pollack and is now being sold by a yuppie real estate agent for six million dollars. The yuppie walks into the guitar shop, drooling over the potential sales opportunity, and his entrance feels like an obscenity—a return to the reality that we frequent stores like Carmine Street Guitars, and films like Carmine Street Guitars, in order to evade. It’s only at this point that Kelly’s democratic bonhomie hardens into defensive contempt, as he virtually refuses to speak to the agent. This episode haunts the film, suggesting a fate that can only be bidden off for so much longer.

Carmine Street Guitars celebrates the thingness of things, as well as the assuring clarity and lucidity that can arise from devotion to knowledge. Kelly’s guitar shop is a cocoon, a place of contemplation, and so it feels inevitable when Jim Jarmusch walks into the store. After all, Jarmusch’s recent films, like Only Lovers Left Alive and Paterson, also celebrate creation and erudition while ruing the arrival of a new culture that’s hostile to such desires. Kelly and Jarmusch talk about the filmmaker’s new guitar, which is partially made from Catalpa wood, leading to a riff on the trees that have been formative in each man’s life. In another moving interlude, Wilco guitarist Nels Cline searches for a guitar for frontman Jeff Tweedy, settling on an instrument that reflects Kelly’s own characteristic design: a telecaster with a dropped horn. Such moments reveal artisanship to be a form of communion, as a personal object for Kelly has been refashioned into a symbol of another artistic partnership.

These themes and associations bob under Carmine Street Guitars’s surface, as musicians noodle around with Kelly. This pregnant sense of implication is Mann’s supreme achievement, and as such the film risks being taken for granted as a charming little diversion, when it should be celebrated as a beautiful portrait of an everyday paradise. When Hulej weeps in gratitude, on her fifth anniversary of working for Carmine Street Guitars, you want to weep with her.

Review: Hyènas Brilliantly Chips Away at a City’s Colonialist Architecture