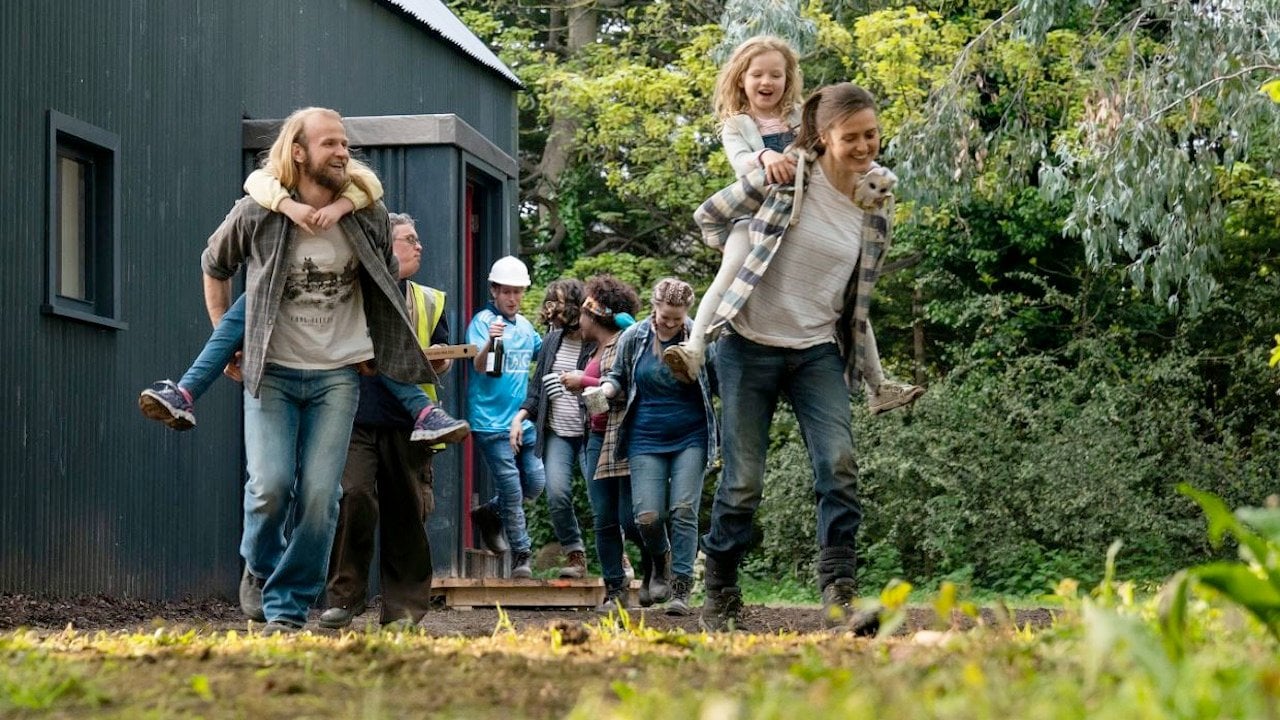 A potentially powerful Irish drama whose impact is diminished by the liberal use of a simplistic metaphor, Herself starts with thirtysomething mother Sandra (Clare Dunne) trying to make a new life for herself and her two daughters after having finally left her abusive husband, Gary (Ian Lloyd Anderson). Between cobbling together part-time jobs and fighting for a spot on the council housing list, Sandra is barely able to put a brave face on their rickety hotel-living situation for her girls, Molly (Molly McCann) and Emma (Ruby Rose O’Hara). But once she finally gets an idea for what could lift them all out of the shadow world of the semi-housed, it lifts their spirits, even as it threatens to enact a heavy price.

Sandra’s big idea comes, like many moments of 21st-century inspiration, from desperate Googling. Finding YouTube videos of a man who claims that it’s possible for ordinary people to build their own home on the cheap, the inexperienced Sandra starts doing some righteous pleading in order to make this dream a reality. In relatively short order, she has just about every secondary character pitching in, from Aido (Conleth Hill), a builder she meets at the hardware store, to Peggy (Harriet Walter), the flinty retired doctor whose house Sandra cleans and who decides almost on a whim to gift Sandra a plot of land and a loan to buy materials.

Herself’s home-building subplot is likely what you expect: the cheery story of disparate people pulling together in hard times as part of an ad-hoc family while uptempo pop music plays on the soundtrack. The film doesn’t lack for well-calibrated acting, but the performances and the story’s more gripping elements about the ways abuse is abetted by institutions aren’t done any favors by the somewhat hammy and more than a little unwieldy symbolism of the simple little backyard home being slowly put together. Director Phyllida Lloyd includes three montages of nails being hammered and wooden frames being lifted into the air when one will do.

The film’s screenplay has a primarily personal angle, inspired by an idea that Dunne (credited here as co-writer with Malcolm Campbell) had after a friend in Ireland lost her home. But it also contains hints of broader societal critiques that distinctly recall a Ken Loach polemic. That sensation is particularly acute in the presentation of Sandra: She’s a somewhat archetypical Loach protagonist, marked by integrity, determination, and the gut-clenching sense that she’s been done wrong, having been knocked around by an opaque, overcomplicated welfare and judicial system overwhelmed by the size of the Irish housing crisis.

Loach, though, would have really zeroed in on such systemic failures. Except for one scene that starkly highlights modern Ireland’s class divide and housing shortage—huddled working-class home-seekers glare at the yuppies who just rented the place they had lined up for (“Should have worn my suit,” a woman grumbles)—Herself puts the focus more on Sandra’s personal empowerment. There’s a rich story here, given the dichotomy presented by Sandra being yoked to Gary, who has visitation rights to their girls, as she suffers traumatic flashbacks to the last time he beat her bloody. But the solutions to her dilemma rarely feel earned, often arriving not after she puzzles through some legal or construction zoning arcana but with friends or near-strangers cheerfully pitching in at just the right moment with just the right bit of help.

In one of the year’s least flashy yet most impactful performances, Dunne effortlessly communicates Sandra’s odyssey on parallel tracks as the woman leans into the hope that the home-building project bring to her and her girls, all while trying to cope with Gary’s increasingly stress-inducing legal attempts to wheedle his way back into their lives. But even though the film does introduce a couple moments of genuine surprise near the end, one following Dunne’s dulcet but foreboding rendition of the old folk ballad “The Lass of Aughrim,” it cannot escape its own somewhat mundane self-set contours.

Review: Shadow in the Cloud Serves Up a Maximalist Blast of the Absurd

Review: We Can Be Heroes Is About Juveniles, and Seemingly Made by Them