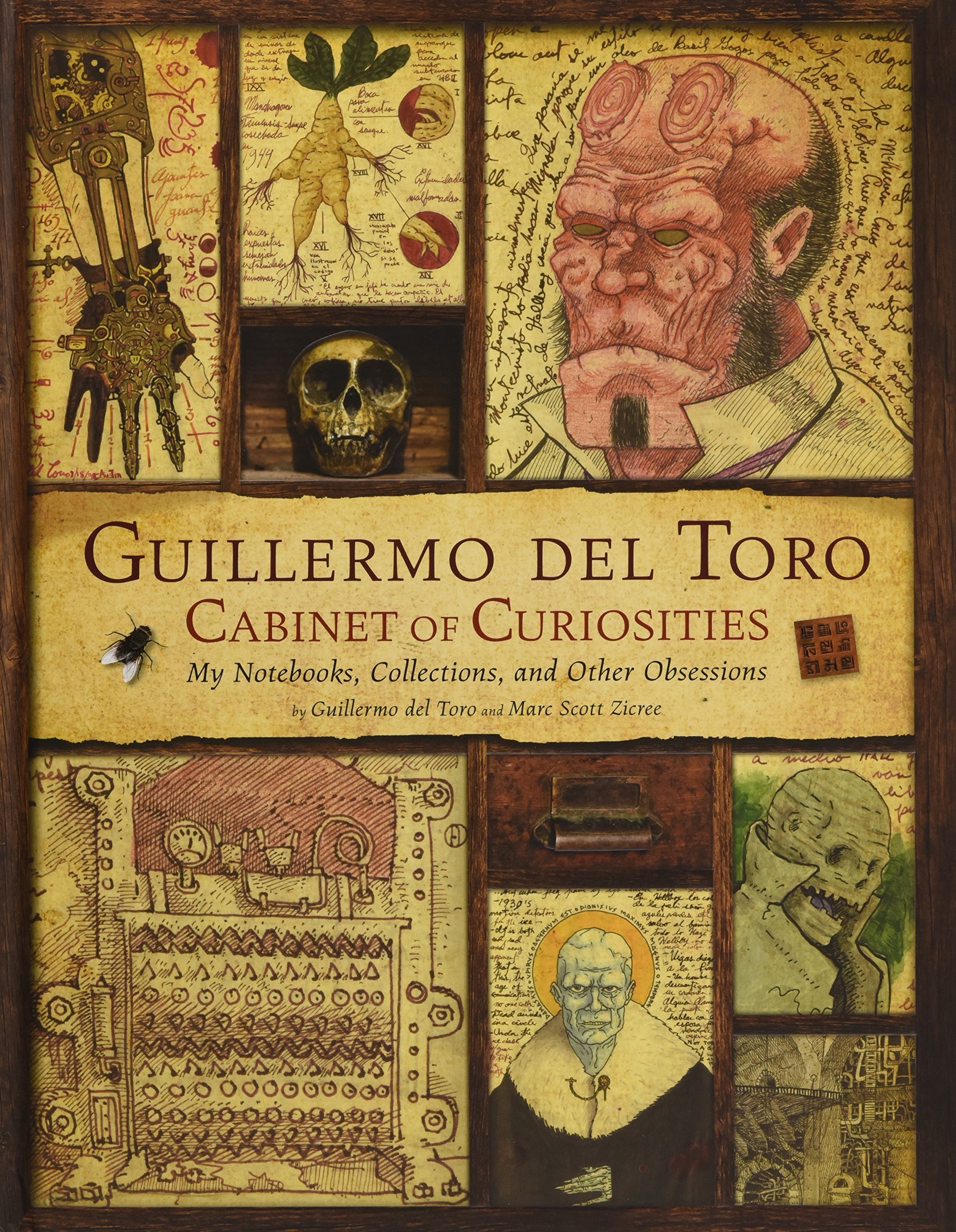 One of the casual disappointments of the ways we often regard art of all forms is born of that feeling of exclusion that’s often projected and even more often felt. There’s a sense that you have to be educated formally to understand art and to discuss it seriously, and that you might have to be a member of an intangible club of lofty intellectuals in order to be empowered to express a thought about a book or a film or a song that you hope to be taken seriously by others. This is a tragedy, because all great art is an act of democracy that can be felt by everyone. Yes, your background will affect your responses to art, of course, and why wouldn’t it? Your background, which is to say the texture of your life (your childhood, friends, lovers past and present, jobs, education), informs your responses to everything.

Guillermo del Toro’s Cabinet of Curiosities: My Notebooks, Collections, and Other Obsessions is a passionate and engaging read, particularly for fans of del Toro’s films, and, most particularly, for monster aficionados of all ages, shapes, and stripes, but it’s most valuable for the way it expresses the filmmaker’s voracious appetite for knowledge. This is an erudite man, and he wears his references lightly, sensually: He invites you into the realms of his obsessions, which include symbolist painters such as Arnold Bocklin, Odilon Redon, and Carlos Schwabe, and writers such as H.P. Lovecraft, Mary Shelley, Arthur Machen, and Stephen King. All of these artists figure prominently in Cabinet of Curiosities, and so do a variety of other painters, composers, and even biologists. You may have a hell of a reading list after even casually thumbing through this volume.

Del Toro’s book obliterates repugnant notions of “high art” and “low art,” the kind of phrases often coined by people who appear to be terrified of having their snob identification card revoked on a possible technicality. Cabinet of Curiosities is a wonderful feast that’s clearly intended as a gateway drug for those who’re looking for a way into edifying themselves on painting and films and music and sketches. It’s a book you can quite rightly lose yourself in, a tome on the crafting of fantasy that, in itself, possesses the greatest attribute of good fantasy: the suggestion that you’re only touching the tip of an iceberg of the discoveries that await you.

With the context provided in this book, it’s little wonder, then, that del Toro has become one of cinema’s most prominent creators of monsters. It’s clear that his creatures are the highest expression of his art; they aren’t eye candy or throwaway money shots jerry-rigged for a quick goose or jump, but fusions of all of his preoccupations and laments, and from film to film they visibly evolve from one another and echo one another. The aging vampire’s glassy complexion in Cronos is seen again in the poignant crackling of the ghost boy’s skin in The Devil’s Backbone, and reborn again in the remarkable carved ivory surface of the lord vampire in Blade II. The Pale Man, the most unnerving of all the creatures to appear in Pan’s Labyrinth, was clearly on del Toro’s mind for a long time, as he appears in many of the director’s sketchbooks in varying fashions, all of which include those precisely rendered long thin teeth. The Pale Man, of course, has already been reborn, too, as The Angel of Death in Hellboy II: The Golden Army.

A typical page from Cabinet of Curiosities, which is composed of interviews with del Toro that contextualize pieces of his minutely detailed sketchbooks, can include polished storyboards that recognizably resemble major sequences from his films, or doodles, that might eventually render a fully developed conceit. Written over and around these pictures (which, themselves, explicitly reflect the influence of Leonardo Da Vinci) are phrases and snatches of dialogue and ideas for blocking and pieces from books the filmmaker admires. A deceptively tossed-off snippet seems to potentially encapsulate del Toro’s great arching theme: “Why enthrone the myth of the perfect, infallible superhuman if it’s always more beautiful to know that the humanity that creates beauty is the same fallible species that can create horror or mystery?”

The book allows us to revisit and pore over most of del Toro’s recurring motifs, such as the fascination with damaged eyes or the clockwork clink-clanking of machinery that often represent his various surrogates’ attempts at immortality or to otherwise gain physical equality with the fabulous creatures they face. And it allows us to freeze the glorious monsters themselves in metaphoric amber, so that we can regard them at our own pace, without the speed of the motion of a film to keep them potentially at arm’s length. Cabinet of Curiosities isn’t just a promotional item released to keep the director’s name fresh in between projects; it’s a fully formed del Toro project in its own right, a beautiful work that will almost certainly sow future seeds of inspiration.

Guillermo del Toro’s Cabinet of Curiosities: My Notebooks, Collections, and Other Obsessions is out today from Harper Design; to purchase it, click here.

Review: In the Name Of