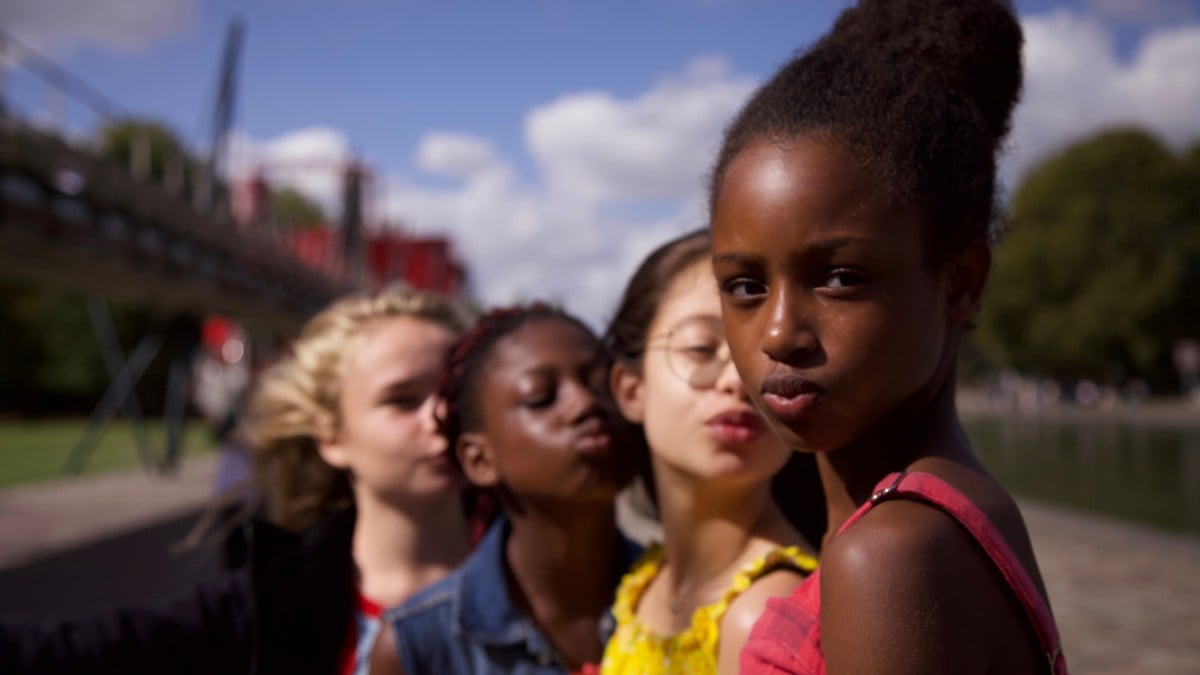 The direct treatment of childhood sexuality—especially girls’ sexuality—on film is an ethical minefield. The moving image and desire are so closely associated, the relation between cinema and the voyeuristic male gaze so firmly entrenched, and the assault of young girls such a persistent threat, that even a hint of a sexualized pre-teen body is apt to provoke reaction. Despite whatever outrage was stirred (or drummed) up before its release, though, writer-director Maïmouna Doucouré’s Cuties navigates a path through a middle-school girl’s self-awakening that feels neither artificially “safe” nor exploitative.

Amy (Fathia Youssouf) is the daughter of Senegalese immigrants living in Paris, and her teenage angst kicks in hard when she overhears her mother, Mariam (Maïmouna Gueye), tearfully discussing with her aunt (Mbissine Thérèse Diop) that the girl’s father will be returning from Senegal with a second wife. Already fascinated by the stylish and insolent four-girl dance troupe that dominates the social life of her school, Amy begins rebelling against her family’s conservative Islamic traditions by hiding crop tops and short skirts under her modest hoodies and jeans, stealing a cousin’s cellphone to engage with her peers’ social media-heavy lifestyle, and practicing hip-hop dance moves in the bathroom mirror.

Amy also insistently integrates herself into the multi-ethnic dance troupe, which calls itself the Cuties. She lurks around them in the schoolyard, spies on the dance practices that they hold under a grimy highway overpass, and continues to quietly elbow her way into the group even after Jess (Ilanah Cami-Grousolas) pelts her with a stone. The shy, socially awkward Amy is an odd match for the brash group of girls who appear to have modeled themselves after Bratz dolls, and they bully her over her initial attempts to merely stand in their proximity.

One of the Cuties, Angelica (Medina El Aidi-Azouni), lives in the same apartment complex as Amy, and she secures for her neighbor a formal entrée to the clique as their videographer. After Angelica has a beef with Yasmine (Myriam Hamma), Amy demonstrates that she’s learned the dance routine and secures a spot as Yasmine’s replacement in advance of a tryout for a local competition. It’s a slot that spells conflict with her mother and aunt, who expect her to help with the conventional women’s duties in preparation for her father’s wedding.

Doucouré has a remarkable grasp of the irrationality and volatility of middle-school social dynamics. Scenes like the one in which Angelica and Amy bond over how many gummy bears they can stuff into their mouths, or one in which the five girls collectively fumble and titter nervously through a video chat with the boy who Angelica has a crush on, capture the odd mental and emotional space pre-teens occupy between childhood and adolescence.

The film’s subject matter puts one on guard that it might oversell capitalist consumption and sexualization of the female body as liberation; Amy’s newfound love of tight, eye-catching skirts and second-hand crop tops recalls the grotesque scene in Sex and the City 2 in which women from the UAE doff their burkas to reveal the latest couture clothing underneath. One early scene in Cuties even sees Amy hiding within her burka during prayer at her mosque, in order to watch hip-hop videos featuring dancers wearing g-strings on her stolen phone.

The difference between Cuties and the conservative fantasy of the liberated woman-consumer, though, is that the former is actually told from the perspective of an immature, subaltern woman trying to figure out which pieces of which culture suit her. It’s a critique both of the Senegalese patriarchy that tells Amy to be a docile and modest future wife and of the Western patriarchal ideology that tells her that the primary avenue of a woman’s self-expression is through her sexuality. A rushed and undersold conclusion to this culture clash notwithstanding, Cuties is an admirable and empathetic portrait of girlhood in a world defined by post-colonialism, digitized social practices, and, not least, the imperative to twerk.

Review: Buoyancy Is Harrowing but Objectively Truthful to a Fault