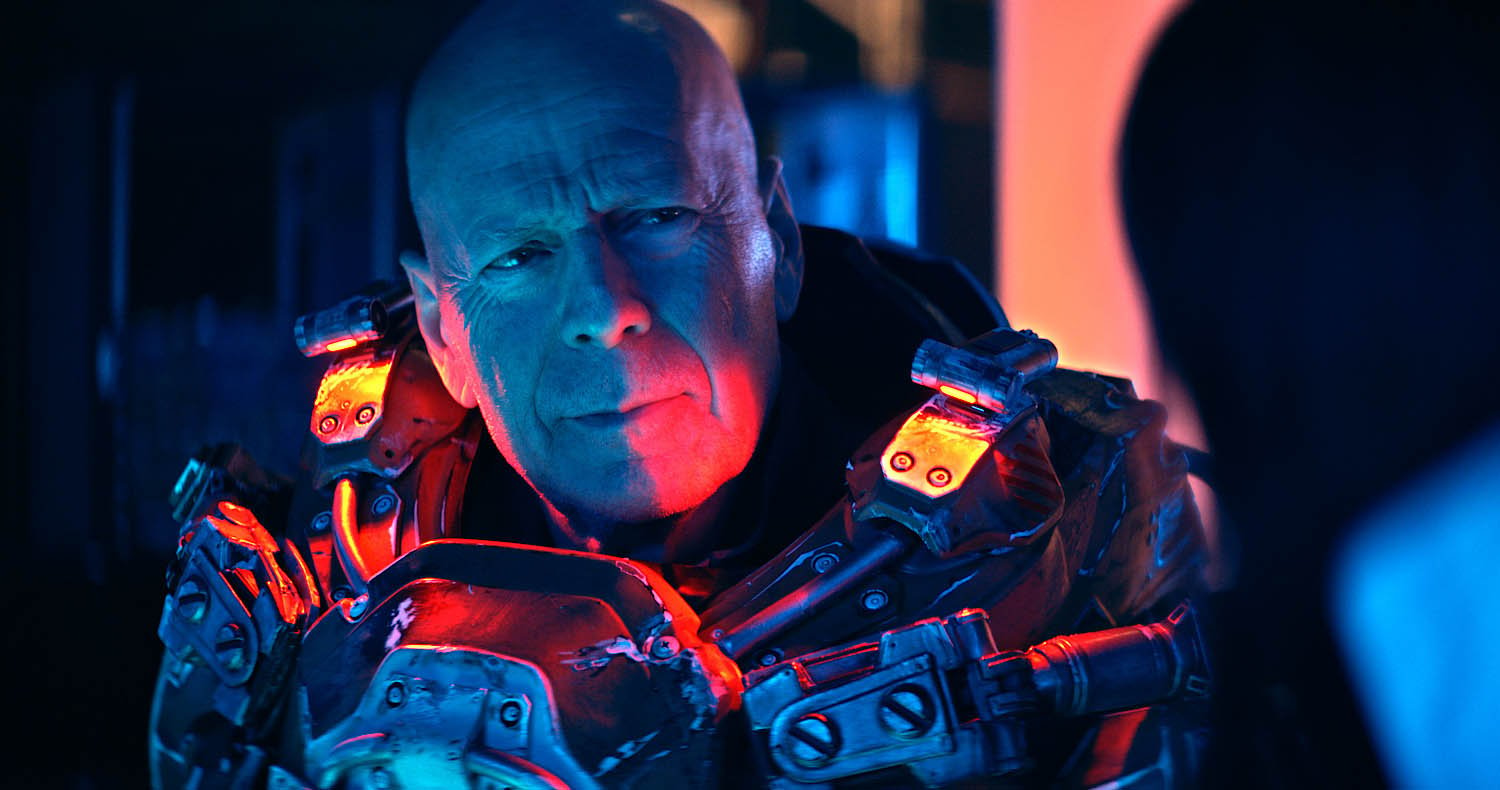 From First Kill to Acts of Violence to Survive the Night to Hard Kill, Bruce Willis’s recent string of VOD-ready curios are blunt, basic, and, well, basically interchangeable. Instead of paying homage to the action cinema of the ‘80s and ‘90s—films such as Die Hard, Speed, and Face/Off, whose titles alone are giddy promises of mayhem—they settle for joyless mediocrity, with Willis sleepily reciting his lines throughout. His latest, Cosmic Sin, now blasts this aggressively lazy shtick into outer space, making it hard to imagine that at one point in the past a goofy misfire like Battlefield Earth was considered the nadir of sci-fi filmmaking.

In the year 2524, the human race has fully colonized space, with a government entity called the Alliance having been set up to rule over a number of disparate interplanetary habitats. Willis plays James Ford, nicknamed “Blood General” because of his role in launching a “Q-bomb” on a planet to wipe out a rebel faction that only wanted to break away from the Alliance’s grip. All of this information is hastily communicated within the first couple of minutes via text cards before we arrive at the now-disgraced general stoically shooting back his regrets in a roadside dive bar as hostile civilians pick fights with him. After robotically dispatching a few of them while barely moving from his barstool, Ford is promptly summoned back to a nearby military base. There has been a “first contact incident” at a mining colony, and since the survivors have returned as rabid Resident Evil-esque alien-zombies, the Alliance is in desperate need of Ford’s help before an all-out intergalactic war breaks out.

During a typically fraught backroom meeting about how to deal with this threat, the “cosmic sin” of the title is put forward by the Alliance’s behavioral biologist and Ford’s old flame, Dr. Lea Goss (Perrey Reeves), referring to the moral quandary of wiping out an entire species, hostile or not, in God-like fashion. But since this kind of terrain has already been covered sufficiently in far more entertaining sci-fi fare, from Independence Day to Starship Troopers, these thoughts barely linger, with one character’s quip that “Either way this works out, it’s going to be on the wrong side of history” serving as the glib extent of the film’s philosophical interests. Strapping on hyper suits that look like they were acquired from a Laser Tag closing sale, Ford and Goss are joined by Commanding General Eron Ryle (Frank Grillo, also on autopilot) and a host of other personality-less soldiers and scientists, and together they blast off into space with a new Q-bomb in order to lay down the hurt on some alien scum.

Back in our so-far short calendar year of 2021, Cosmic Sin is already the second sci-fi extravaganza that Willis has appeared in, following the January release of John Suits’s similarly excruciating Breach. The screenwriter of that film, Edward Drake, takes on both writing and directing duties here and almost seems to be attempting a sequel of sorts by regurgitating the same storyline about space colonization and killer alien creatures. Next to the cheap visual monotony of Breach’s spaceship hallways, Cosmic Sin’s celestial vistas are practically a triumph of visual effects wizardry, but the film doesn’t offer anything in the way of audience engagement, as each story beat is unimaginatively cribbed from better films and every tepid exchange of dialogue is unconvincingly performed.

Cosmic Sin does eventually attempt an epic climactic battle between man and alien, but since Drake and company have given us cardboard cut-outs instead of characters and no thematic meat to chew on, it’s all just a numbing cacophony of futuristic gunfire, aesthetically recalling an uncool version of Tron crossed with any number of Marvel movies. If nothing else, the gnawing boredom of the whole endeavor gives us plenty of time to discern whether Willis is actually present on screen for any shot that doesn’t explicitly show his whole face.

Review: The Inheritance Slyly Contemplates the Legacy of Black Activism