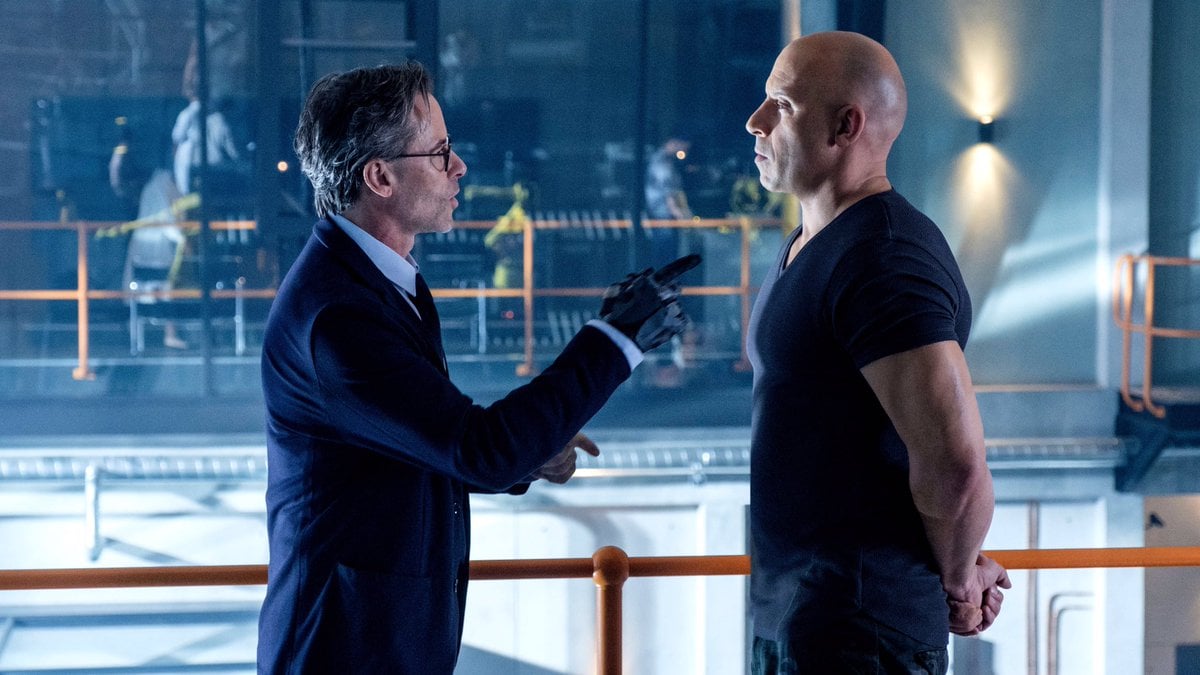 Dale Wilson’s low-rent sci-fi actioner Bloodshot almost feels like a two-decade-old Jean-Claude Van Damme film, but the presence of the equally charisma-inhibited but far less lithe Vin Diesel, along with the prominent use of computer-generated particle physics algorithms, marks it undeniably as a contemporary production. The familiar plot centers on a left-for-dead soldier, Ray Garrison (Diesel), who’s resurrected by a nefarious military tech company led by Dr. Emil Harting (Guy Pearce). The aptly named Rising Spirit Technologies (RST) replaces Roy’s blood with nanites, rendering him virtually impervious to wounds but also subject to the encoded machinations of Harting’s firm, which makes the soldier an unwitting participant in its murderous corporate schemes. You don’t need to have seen Paul Verhoeven’s RoboCop to know where this one is headed.

Diesel doesn’t exactly stretch himself as an actor, growling and murmuring throughout as another one of his tough guys with a heart. In fact, this hulking ex-special-forces grunt has so much heart that sometimes, when he’s out performing his action-hero duties, it literally glows through his clothing. It’s a visually distinguishing element of this comic-book hero that’s surely cheaper to render than the complex slow-mo animations of his body reconstituting itself after he’s wounded, which the film so sparingly deploys. Out for revenge for the murder of his wife, Gina (Talulah Riley), the newly superpowered Ray defies the RST lab that now essentially owns him, heading into the outside world to stroll right into volleys of bullets fired by the vaguely identified criminal terrorist organization that killed her.

Given its hero’s imperviousness, Bloodshot’s chaotically edited action sequences also tend to be devoid of suspense, if not always visual interest (there’s a fun-enough fight on an industrial elevator between Ray and an exo-skeleton-enhanced RST lackey late in the film). The most interesting portions of the film turn out to be sequences set in RST’s big control room—you know, a space with lots of little screens and one very big screen—where Harting, Ray’s fellow prostheticized ex-dead-soldier K.T. (Eiza González), and the company’s comic-relief techie, Eric (Siddharth Dhananjay), not only surveil Ray’s every action, but also construct his psyche.

It’s probably not giving too much away to reveal that the nanites give RST more access to Ray’s thoughts and actions than they initially let on. We watch as, like in a video-game world, computers populate Ray’s fabricated dreams and memories with 3D models. These scenes could almost be described as evocative, even if Wilson’s film is too preoccupied with gunplay and car crashes to pursue its own implications about the ephemerality of Ray’s technology-infused being, and despite the fact that even these scenes’ self-reflexivity comes off as highly derivative. It would be hard to argue that even the more interesting parts of Bloodshot are more than dumbed-down rehashes of scenes from the Wachowskis’ The Matrix and Duncan Jones’s underrated Source Code, but at the very least, it’s parroting good material.

Review: The Hunt’s Empty Provocations Are a Show of Bland Bothsidesism