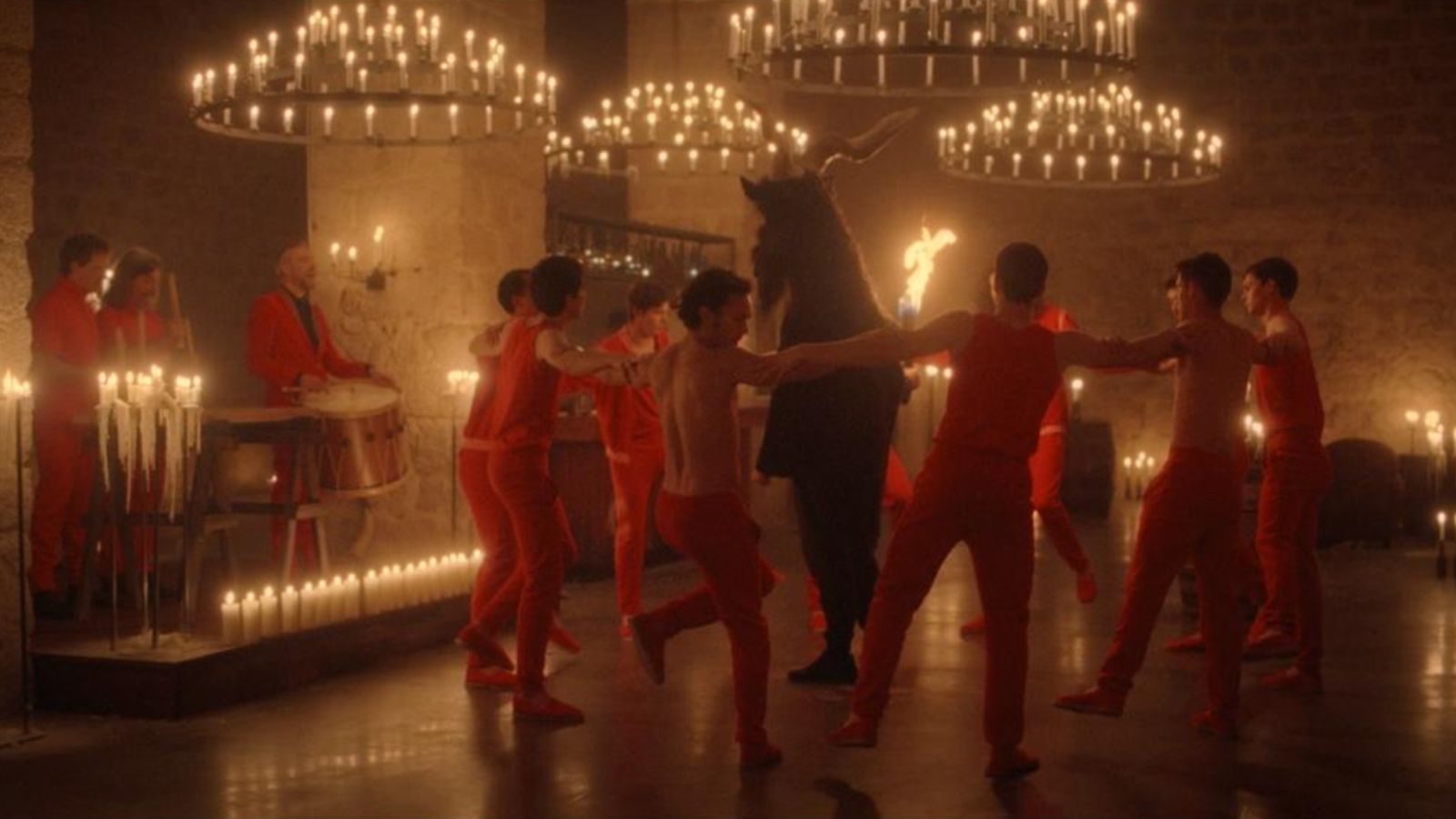 Basque myth gets the Eugène Green treatment in Atarrabi & Mikelats. Green, born in the United States, moved to France in 1969 and became a permanent citizen in 1976. A year later, he founded the Théâtre de la Sapience, a company dedicated to performing baroque plays, many written by Jean Racine, in a style as close to the 17th-century originals as possible. When he finally made his first film in 2001 at the age of 54, Green transferred much of this theatrically declamatory style to the cinema. His films feel very much out of time—at their best in ways that enchant, edify, and illuminate, at their worst settling into a kind of arch smugness that Green himself reportedly displayed at the recent San Sebastian Film Festival, where he was ejected after refusing to abide by Covid-19 protocols.

The real world doesn’t especially intersect with Eugène Green’s world. Atarrabi & Mikelats literalizes this conceit under its opening credits, as images of a bustling, modern-day port city segue, via a leisurely drive along the freeway, into shots of the serenely pastoral Basque countryside where the story takes place. In a prologue, the goddess Mari (Adelaïde Daraspe-Lafourcade) seduces and kills a mortal man. Their union produces a pair of brothers, Atarrabi and Mikelats, who Mari hands off to the devil (Thierry Biscari, decked out in eye-searingly red fitted suits) so that they may be educated in the ways of the (under)world.

Fast-forward a few years and the now young-adult Atarrabi and Mikelats, played by brothers Saia and Lukas Hiriart (both prime examples of Green’s peculiar maybe-queer-maybe-not partiality for idealized male beauties), are nearing the end of their schooling. Like most mythological tales involving siblings, one brother is leaning toward good, the other toward evil. Gentle Atarrabi longs to leave hell and explore the land of mortals, while the puffed-up Mikelats is more than content to remain in this shadowy realm with its innumerable fleshly pleasures. “We’re at the height of hipness here,” says the devil to Atarrabi at one point, though this candelabra-lit land of perdition seems more like a Middle Ages-themed nightclub that’s hit hard times. Then again, where else can you down a brewski with your bros while dancing with a goat-headed ghoul that resembles The Witch’s Black Phillip?

Atarrabi does manage to escape above ground, though at a price: The devil takes his shadow and he is “cursed” with mortality. Mikelats, meanwhile, pledges loyalty to his demonic master, the reward for which is eternal life. From there, Atarrabi mostly takes precedence, as he joins a monastery that refuses to ordain him due to his absence of a silhouette, and also woos a village girl, Udana (Ainara Leemans), who will play a prime role in her new beau’s fate. Whenever Mikelats shows up he’s like a thorn in the side, though his self-satisfied certitude has more than its fair share of attractive qualities.

A challenge inherent to a parable of this sort is that evil, being so seductive, can make good seem dull or prissy by comparison. The only real way for an artist to compensate is to somehow capture the ineffable quality of transcendent grace that many believe results from living a virtuous life. The great Éric Rohmer was a master at this, and Atarrabi & Mikelats occasionally feels kin to such medieval fables such as 1978’s Perceval or 2007’s The Romance of Astrea and Celadon, in which morality has an ecstatic, at times erotic charge that the devil can’t hope to compete with. If he can’t connect, he can’t collect.

Green, though, doesn’t have Rohmer’s deep-rooted sense of faith in life. His beliefs stem from the soil of artistic forms long out of fashion. And he reconstitutes them in our modern world as a kind of scornful, superior exercise. When characters speak, as they often do in Green’s movies, direct to camera, it has the feel of a judgment from on high rather than an invitation to engage, a bridge-burning as opposed to a bridge-building. The resultant alienation does have its surreal pleasures, particularly here when Atarrabi meets with a hirsute, Bigfoot-like spirit (the po-faced mode of address heightens both the freakish hilarity and the eerie intensity of the encounter). Yet the limitations of Green’s methods are evident in how his films, in toto, rarely stick in the heart as they do in the mind.

Review: The War with Grandpa Is a Parade of Stale-on-Arrival Gags

Review: The Forty-Year-Old Version Is a Sardonic Look at Underachievement