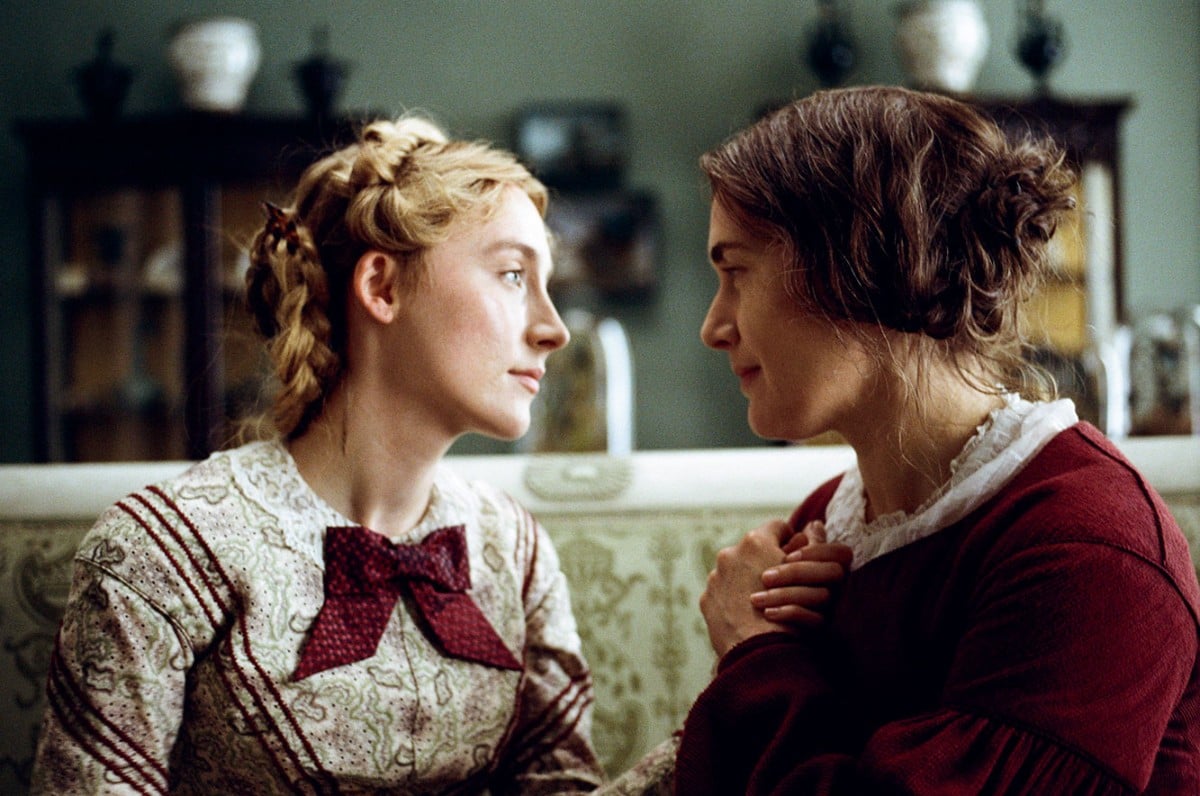 Francis Lee’s Ammonite, the British filmmaker’s follow-up to his critically acclaimed God’s Own Country, is another depiction of same-sex desire enacted across cultural barriers, set against a spare English landscape. Telling the story of influential 19th-century geologist Mary Anning (Kate Winslet), a working-class woman who was relatively unheralded by the male-dominated scientific community, it focuses on the (mostly fictional) relationship that she forms with the younger Charlotte Murchison (Saoirse Ronan), wife of geologist Roderick Murchison (James McArdle). Much as he did in God’s Own Country, Lee presents us with a protagonist whose romantic struggles are as much a product of her own emotional inhibition as they are imposed by the judgments of society.

Ammonite’s class dynamic is established early on, as close attention is paid to the details of Mary’s manual labor, and we see her stubbornly refuse to accept money from a wealthier acquaintance, Elizabeth Philpot (Fiona Shaw), with whom she appears to have some kind of fraught emotional history. Just as Mary is forced to subjugate her passions and scientific interests to more mundane financial demands, including selling her most prized fossil to the British Museum in order to cover her bills, she also lets her own desires be reined in by feelings of guilt related to being her elderly mother’s (Gemma Jones) only surviving child.

There’s a push and pull between Mary’s need for independence and her sense of filial duty, and these elements combine to make her wary of pursuing a relationship with anyone, let alone a woman from such a different background as Charlotte’s. In one of her best performances to date, Winslet regularly reveals new hints of fragility beneath Mary’s hard-edged veneer of pride and proletarian resilience. But there are a few moments later in the film where the themes are spelled out a little too clearly, undercutting Winslet’s impressive restraint. When she explains to Charlotte her reluctance to commit herself to another person, comparing her situation to a fossil being collected and placed under glass, Mary starts to come across as a little too self-aware, appearing far removed from either historical veracity or emotional truth.

Ammonite also belongs in large part to cinematographer Stephane Fontaine, who was responsible for the transcendent imagery in Jacques Audiard’s most acclaimed works, including The Beat That My Heart Skipped and A Prophet. Regularly deploying shallow-focus shots that isolate Mary from Charlotte or other characters in the frame, and tight close-ups of hands and faces struggling with frustrated desires, he’s very much relied upon to communicate feelings that can’t be verbally articulated in this repressed Victorian social milieu.

As laden with meaning as the fossils in Mary’s seafront shop and home in Dorset, Ammonite’s imagery is often just as lifeless; though technically impressive, it rarely illuminates much that isn’t already obvious about the characters or narrative. If the film could just trust the audience to grasp the central conflict—that women of different generations, from opposite sides of the class divide, might struggle to conduct a relationship in Victorian England—then a bit more time could have been spent allowing us to instead appreciate the textures and incidental details that can make a period setting like this one come to life, perhaps allowing it to becoming something more than an exquisitely rendered museum piece.

However, when Mary and Charlotte are finally able to give in to their mutual attraction, the film’s oppressive pictorialism does start to make a bit more sense in hindsight, revealing itself partly to be a strategy to make us feel as restricted and trapped as the characters. Standing in stark contrast to the dull symbolism that dominates elsewhere, the film’s surprisingly graphic sex scenes are profoundly effective at conveying the feelings of intimacy and liberation that the women are briefly able to experience, in a world that has no proper place for them.

It’s the compulsion to make Anning stand in for something broader than herself that keeps tripping up Ammonite, though this is a problem endemic to most biopics, and was maybe even more inevitable here. With class, gender, and sexual politics all converging in the figure of Anning, there’s not quite enough room for her to have real idiosyncrasies or spontaneity. The film ultimately puts her on a pedestal as much as her younger lover does, and Anning’s symbolic grappling with societal forces ends up keeping the audience at a similar distance.

The film’s noble efforts to stake a claim for this scientific pioneer’s place in history culminate in an ostentatiously obvious shot toward the end, when Anning pays a visit to her most prized fossil in the British Museum. She temporarily stands in front of a painting and is literally framed, in profile, alongside other portraits of exclusively well-heeled old men, receiving the institutional validation that Ammonite elsewhere seems to suggest is essentially meaningless. An apt example of how it regularly tries to have its cake and eat it, what’s also being obscured here is the more interesting character study that the film could have been, if not for the heavy-handed visual metaphors, and the burden of historical significance.

Review: Jingle Jangle: A Christmas Journey Is a Joyful Ode to Collaboration

Review: I Am Greta Lacks the Urgency of Greta Thunberg’s Crusade