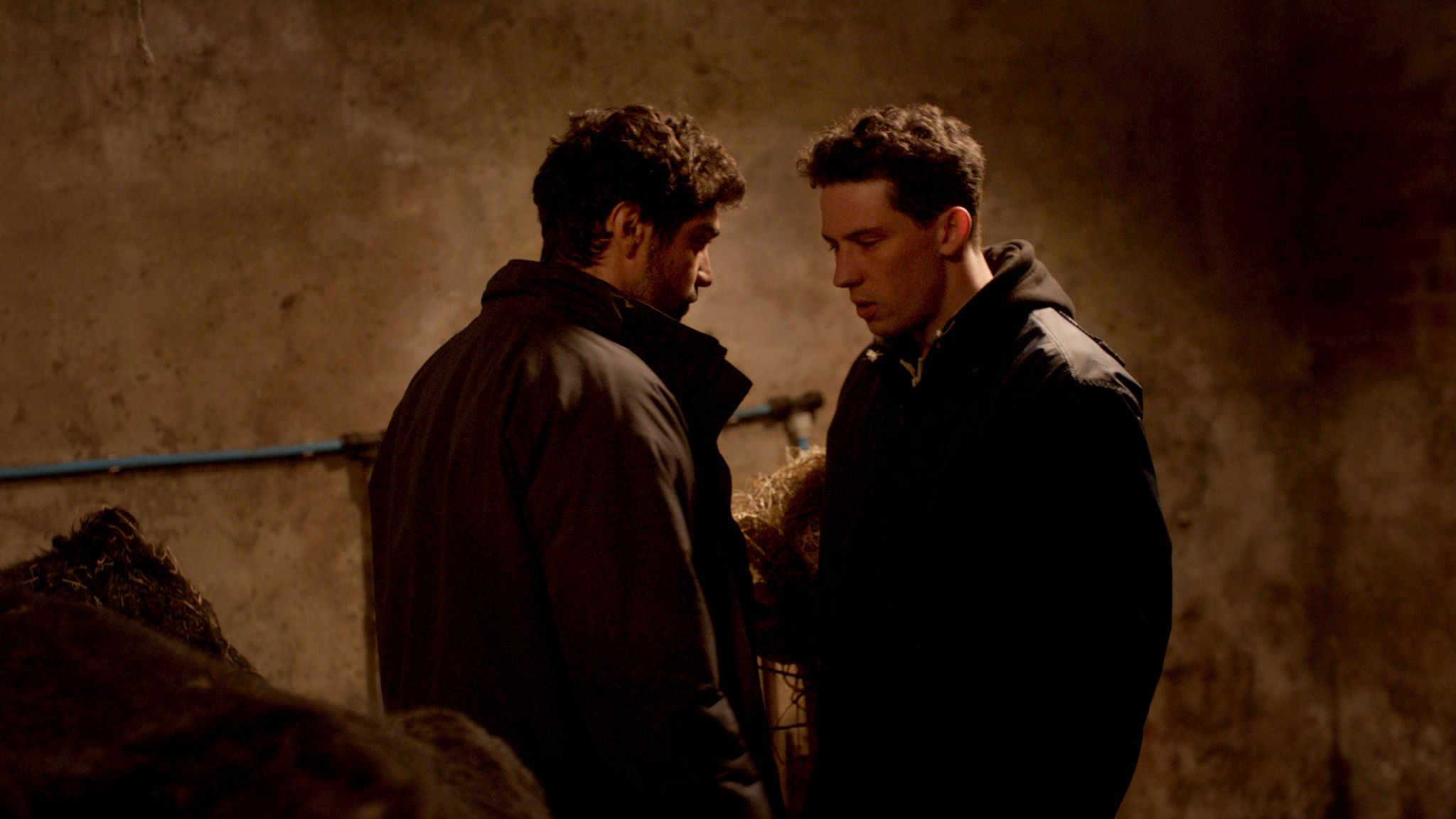 The Yorkshire countryside appears endless in God’s Own Country, yet there’s seemingly no room for feelings here. The film’s protagonist, Johnny (Josh O’Connor), leads a miserable life with his icy grandmother, Deidre (Gemma Jones) and father, Martin (Ian Hart), on their patch of farmland. He disdains friends who’ve dared to leave this God-forsaken corner of the world, wallowing in boredom and alcohol, sometimes having sex with the occasional twink who crosses his path. Day in and day out, Johnny goes to bed drunk and wakes up vomiting. That’s until the arrival of Gheorghe (Alec Secareanu), a Romanian hired hand brought on to the family farm who derails Johnny’s self-destructive mechanisms, or at least the repetitiveness of it all.

The dreaded yet ever-enticing figure of the foreign guest ends up exposing what Johnny had been working so hard to keep bottled up, and it all oozes out in the most maladroit of ways. Writer-director Francis Lee vividly captures the gracelessness with which long-buried feelings rise to the surface when, in a secluded part of the Yorkshire countryside, Johnny approaches Gheorghe like a predator. The sex between them begins as a fight—deadlocked by desire, shame, and Johnny’s complete illiteracy in matters of the heart. How to untangle a knot if roughness is all one knows? They push each other to the ground, rolling on the dirt and huffing like animals. Nobody says a word.

After their first sexual encounter, Johnny and Gheorghe engage in an awkward choreography that persists throughout the film—not only because all that Johnny knows is to resist affection, but because Gheorghe’s tenderness is a gift he’s only willing to give if Johnny proves he’s willing to receive it. For Johnny, the sex between him and Gheorghe feels like a purge—like he’s finally close to vomiting the last remnants of all the insecurities that he feels about himself and his family. This catharsis renders Johnny progressively hospitable to what Gheorghe has to offer: the promise of a life where feelings aren’t only possible, but also speakable. The day after they first have sex, Gheorghe tries to make conversation with Johnny, telling him how beautiful the landscape is, and how when he was a child he never thought he’d ever leave his own farm. Like a testament to Johnny’s own experiences of daring to imagine the unimaginable, Gheorghe introduces Johnny to the idea of expressing oneself.

There’s something problematic about outsourcing to the figure of the mysterious and racialized Other the things that the white protagonist can’t do or say, as the film entrusts Gheorghe to act out what Johnny cannot, basically teaching him how to feel. A similar dynamic played out in André Téchiné’s Being 17, where all the white character needed in order to surrender to desire—to queerness, really—was to cross paths with an enigmatic black boy with a penchant for swimming naked in the freezing wintertime. The pacing of Johnny and Gheorghe’s love affair is also implausible at times. Johnny’s ancient disavowals become accepted a bit too quickly, as he allows himself to slide into Gheorghe’s proposed domesticity under his parents own roof and watchful eyes. But O’Connor’s performance is so believable that the film disarms us into rooting for the affair to end like a fairy tale.

God’s Own Country is so moving because Lee manages to paint a multi-dimensional portrait of Johnny and his family dynamics—one that feels at once incredibly British and uncannily familiar. This is a film about masculinity as an impossible and necessarily toxic project. Lee captures not only what masculinity does and how it comes undone, but the complex apparatus that keeps it into place: the family’s surveillance, the silence, the shame.

Johnny’s contentious relationship with his ailing father adds profundity and credibility to the young man’s excursion into queerness, or into pleasure writ large. Lee suggests that to be a man is to play a miserable game of replacement and reenactment, with the son picking up where the father leaves off. Masculinity in God’s Own Country is, despite popular belief, the most frail of human endeavors. It’s tenderness that’s ultimately aligned with life-giving strength, as in the way Gheorghe resuscitates an almost dead newborn lamb by rubbing it like a mother would a child, or when Johnny musters enough courage to touch his father’s hand, as if for the first time.