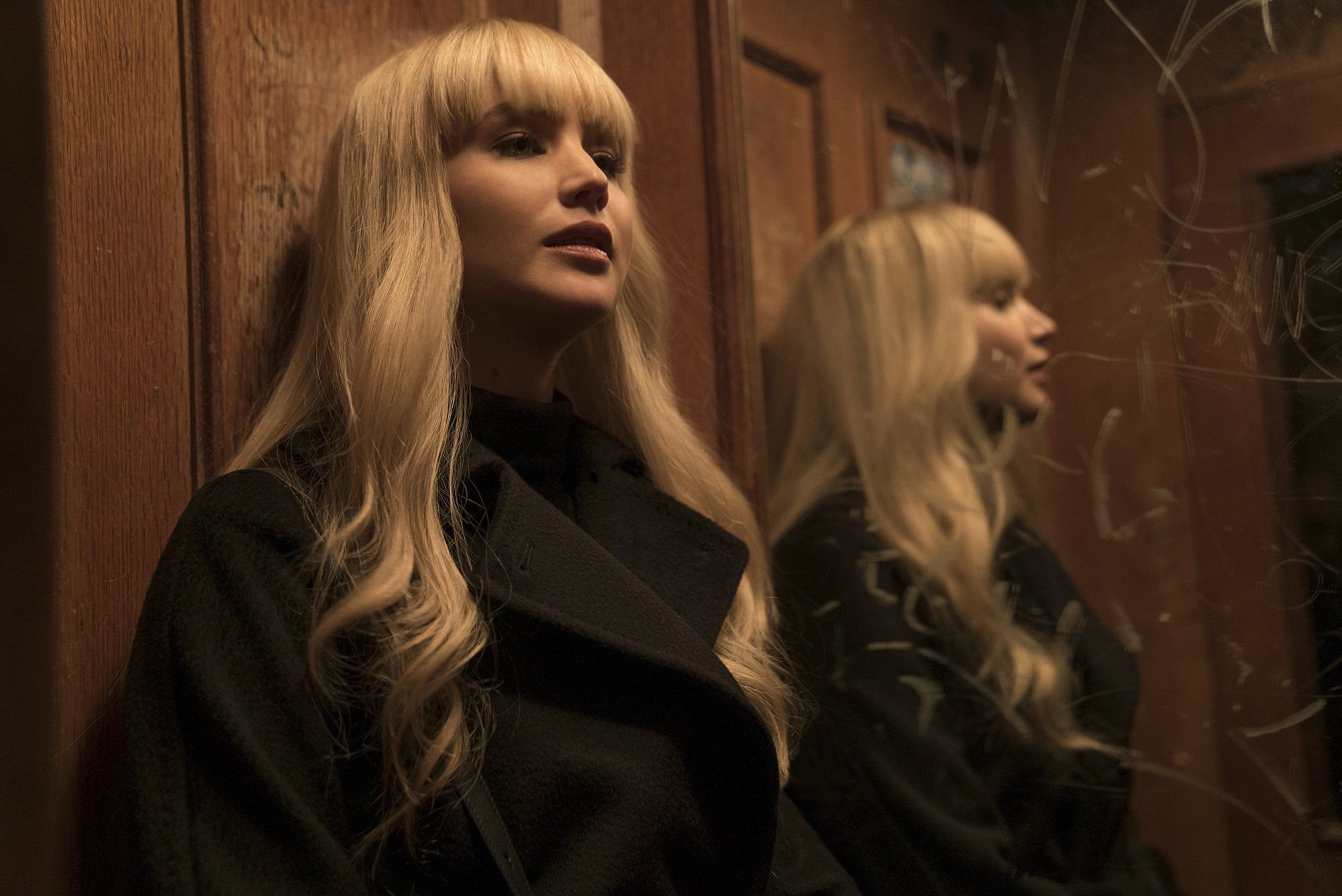 Francis Lawrence’s Red Sparrow is at its most deliciously ludicrous across a series of scenes set inside the Sparrow School, where young men and women like Dominika Egorova (Jennifer Lawrence) are trained to seduce Mother Russia’s enemies. The school’s matron, played by Charlotte Rampling, is in the business of creating spies for the country’s police state, and after bombarding her students with broadsides decrying the West for its “sentimental moralism,” among other things, she gets to work. Any given day’s lesson plan seems to be spontaneously inspired. Take the girl who reflexively refers to a prominent political figure in Russian society who was caught on camera in a compromising position with another man a “degenerate,” which is the matron’s cue to unbelievably drag the politico, now a prisoner, into the room and have the girl kneel before him and ready herself to go down on him.

The Russia of this film plays to the stereotype of the country as a place where virility would appear to be a mandate. Here, Vladimir Putin’s perpetually dreary home turf is still reeling from the collapse of the Soviet Union, and the country’s foreign intelligence agency, the S.V.R., is devoted to the use of sexual degradation to create runway-ready human automatons who will help Russia to reinvent its geopolitical identity. You may wish for a more sophisticated take on the country’s state of affairs, or maybe just a more concrete sense of Dominika’s actual opinions of Mother Russia’s embrace, until you remember that this espionage thriller—opening in the doldrums of February—isn’t trying to be The Americans. Red Sparrow isn’t in the business of schooling you so much as it is in stringing you along, and it does so in often rollicking fashion.

Dominika is a ballerina whose career comes to a gruesome halt during a performance, after which her Uncle Vanya (Matthias Schoenaerts), a high-ranking S.V.R. official, provides her with evidence incriminating the peers who planned her injury. After approving of her revenge tactics, which involve Dominika turning her temporary cane into a bludgeon, Vanya sets out to test her mettle against the state’s enemies. Soon she’s sent to Miss Rampling’s School for Sexual Enigmas, where of course she makes an incredible impression on S.V.R.’s higher-ups in spite of doing almost nothing according to script. In Red Sparrow’s best scene, Dominika is asked to give the classmate who tried to rape her the day before exactly “what he wants,” at which point she proceeds to do the exact opposite. First she takes off her clothes, and after spreading her legs, Dominika figuratively cuts him down to size by obsessively fixating on his flaccid member—a power play that tells you everything you need to know about this fiercest of Red Sparrows.

Soon, Dominika is hopscotching back and forth between Russia and Budapest, put on the tail of a C.I.A. agent, Nathaniel Nash (Joel Edgerton), who was once stationed in Moscow and immediately senses that she purposely tipped him off to her real identity. But to what end? From Russia, Vanya and his cronies—the ever-somber Alexei (Ciarán Hinds) and part-time ushanka spokesman Korchnoi (Jeremy Irons)—keep tabs on Dominika’s efforts to ingratiate herself with Nathaniel in order to apprehend a mole within the S.V.R., while the C.I.A. attempts to use the newly minted Sparrow to catch a traitor within the U.S. government’s own ranks. There will be secret exchanges, break-ins, torture chambers, and slaps to the face, and there’s a brisk efficiency with which Red Sparrow zig-zags from plot point to plot point, never giving fateful or conspicuous weight to all the breadcrumbs that point toward its long game.

The filmmakers may keep Dominika at arm’s length from the audience, but Jennifer Lawrence makes hay of having to play a walking enigma. The way that Dominika is at once completely transparent and at the same time impossible to read is Red Sparrow’s most intriguing through line, not least of which for the way that Lawrence makes you grasp the canny mental gymnastics that her character has to do in order for everything that she says to be at once truth and obfuscation. The actress constantly operates in a less bludgeoning register than the film, which is only really concerned with the matter of Dominika’s allegiances and how the mechanics of the twisty plot keeps that suspense percolating. Lawrence provocatively regards us as her only allies, tipping us off in the subtlest of ways to the reality that Dominika’s only allegiance is to the blunt force of her avenging body.