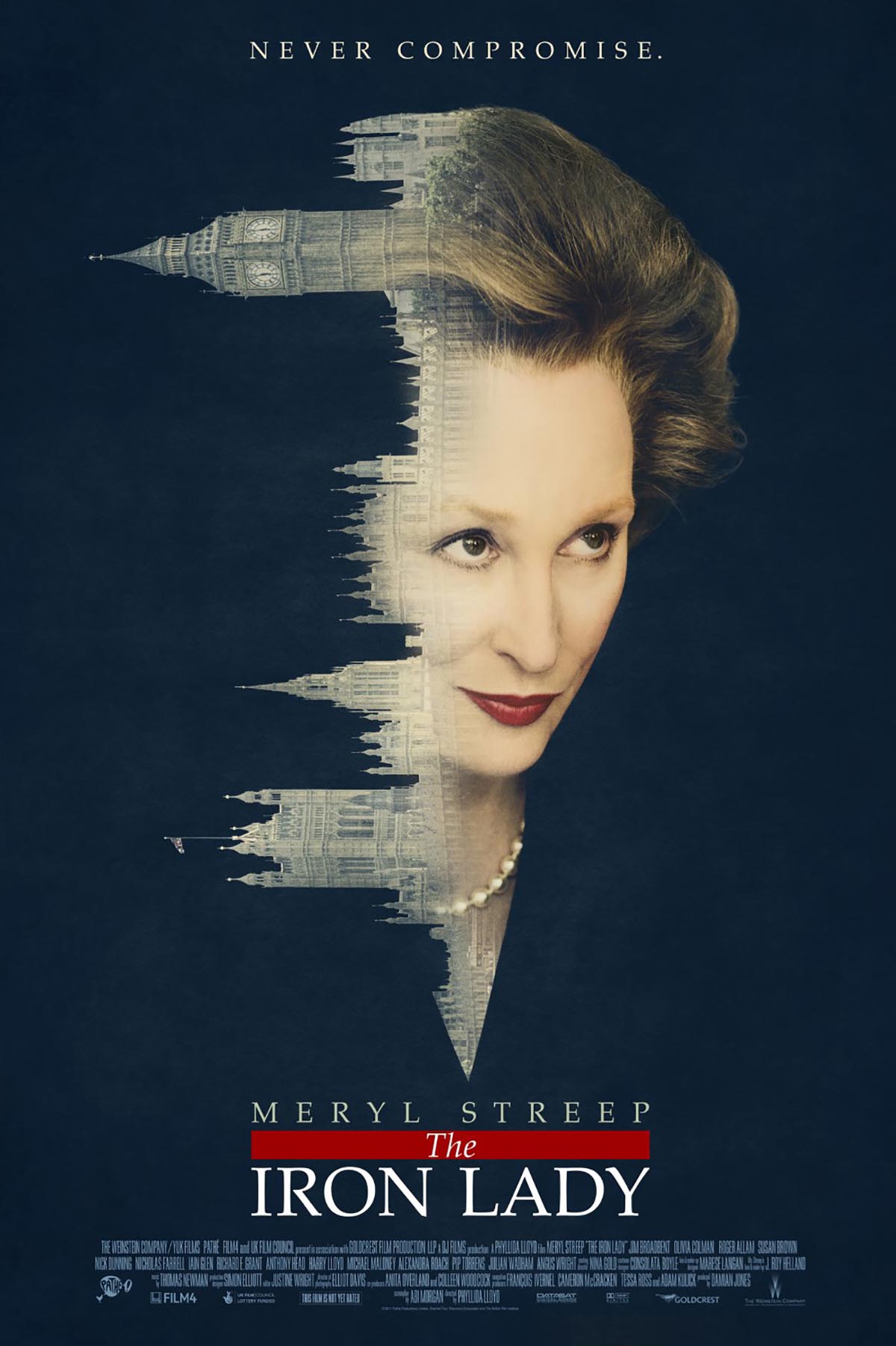 There are plenty of Oscar contenders whose posters reflect a hunger for trophies (the most common sign being a slathering of laurel leaves and reminders of actors’ past recognition), but in the cases of The Iron Lady and J. Edgar, The Weinstein Company and Warner Brothers are going full-on campaign, stripping away the veneer that can downplay the rampant politics of awards season. Both images emit a roaring, pompous confidence in their lead candidates, as well as that dusty air of stuffiness that hovers over so many political ads. Though denoting stories that unfold on opposite sides of the pond, the posters see their gap bridged by a like-minded championing of ruthless ambition and nationalistic victory (not to mention a little red, white and blue). Forget subliminal—the folks behind these designs want a lot of bloody votes.

Anyone who’s seen the teaser trailer for The Iron Lady surely picked up on the Weinstein camp’s full awareness of the popular notion that Meryl Streep already has Best Actress in the bag for her portrayal of Margaret Thatcher. Banking on the idea that a mere peek at the actress in character will suffice, the one-minute clip is primarily a Streep pep talk from actors Roger Allam and Nicholas Farrell: “You’ve got it in you to go the whole distance,” the pair advises, speaking directly into the camera. And there, in a nutshell, is the film’s entire strategy.

The Iron Lady poster paints Streep as a sort of indestructible empire in and of herself, her ever-expressive face one with the foundations of Parliament. Echoing the double-exposure portraiture of budding British photographer Dan Mountford (and probably earlier artists who aren’t springing to mind at the moment), the image is fun to scan over, even if your only amusement is seeing Big Ben sprout out of Streep’s head. Albeit a tad silly, there’s a visual interest to it that at least somewhat breaks convention, and it expresses Thatcher’s monumental influence, not to mention stone-cold overcompensation. The poster’s greatest entertainment is in the campaign-ready tagline, “Never compromise,” a hilarious motto to associate with Streep. In her gobbling up of the baity roles her talent has afforded her, compromise is one thing the Oscar record-holder has definitely done, for rarely have her films or directors matched the spotlight-snagging performances she’s delivered (The Iron Lady is directed by Phyllida Lloyd, the woman behind Mamma Mia!, of all horrid things). In that sense, it’s not a stretch to assume that Streep had some input on the whole Iron Lady marketing machine, as she’s long been her own it’s-all-about-me campaign manager.

The poster for J. Edgar, while technically boasting a more sophisticated look (it was also released in traditional photo form), doesn’t offer as much meat to tear into, however ravenous the appearance of Leonardo DiCaprio’s teeth. Opting for a halftone, propaganda approach that bleeds Americana, the image is more nostalgic than inspired, putting a lot of stock in the evocation of an era that, admittedly, it pretty much nails. The illustrative effect also acts as a buffer in terms of believability, helping to shield DiCaprio’s lack of resemblance to Hoover and focusing instead on the iconic mood of an expression. The whole thing would be far more captivating and promising if there weren’t the looming knowledge that the film is directed by Clint “That’ll Do” Eastwood (though a screenplay by Dustin Lance Black helps matters). Eastwood is one of three men to whom we can attach the tagline, “The Most Powerful Man in the World,” as the self-important awards monger certainly has the ego for it. The second, naturally, is the film’s subject, and the third is DiCaprio, who, like Streep, was a contender even before the cameras rolled. The phrase is just the sort that can help propel the movie star to the Oscar podium, and incidentally, it has a kind of wink-wink appropriateness, for who better to play the most powerful man in the world than the self-proclaimed king of it?