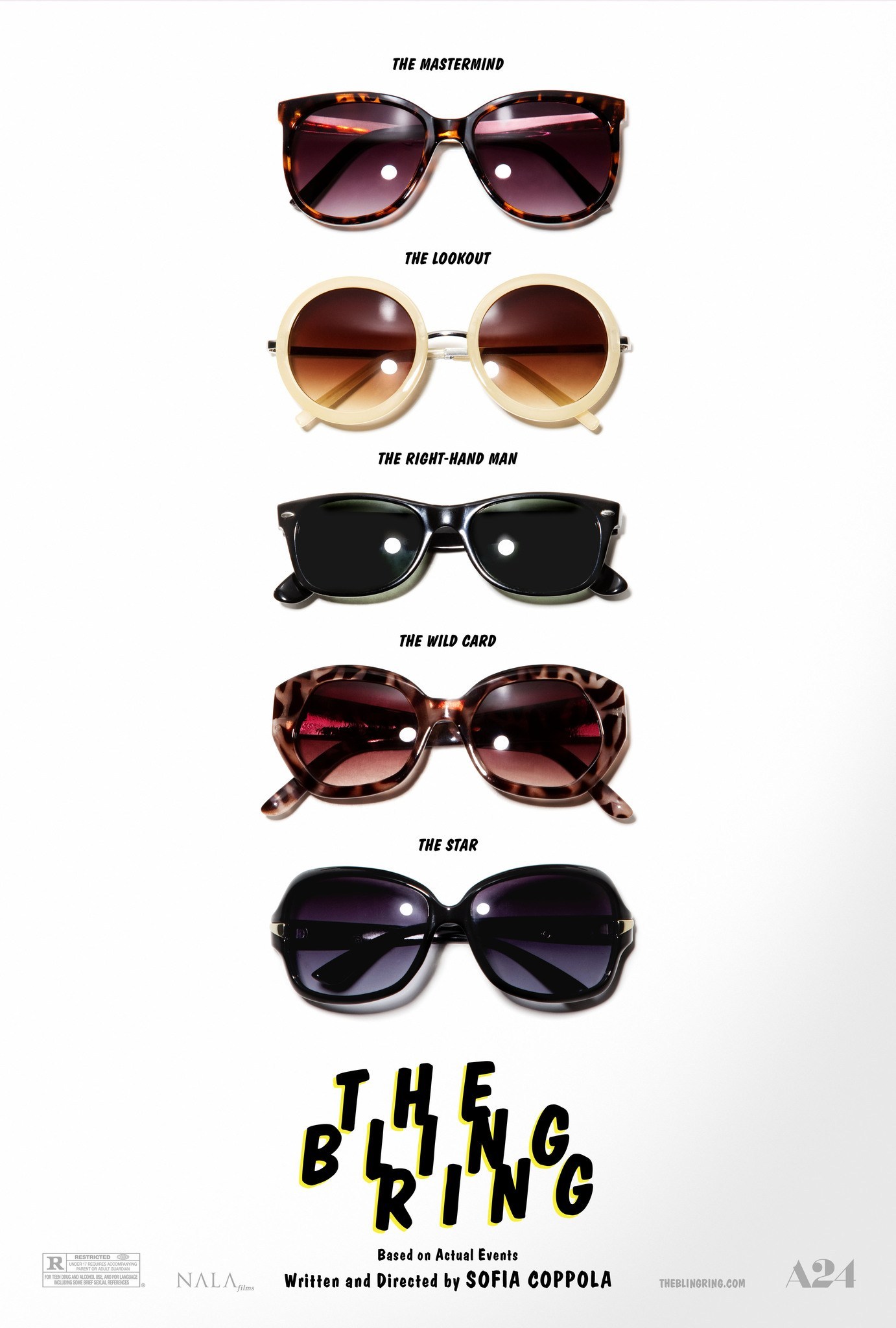 First and foremost, the teaser poster for Sofia Coppola’s The Bling Ring exhibits the director’s bouncy, rebellious verve, which she’s always managed to balance with a good bit of melancholy. From The Virgin Suicides to Somewhere, Coppola has keenly mixed the dour with the glamorous, and rarely ever conveyed shallowness in the process. All of which bodes well for her latest, which recounts the real-life story of a band of adolescent thieves, who robbed the homes of Paris Hilton and her ilk, and sported their booty as if they themselves were rich socialites.

Many will acknowledge that this poster speaks to Coppola’s consistent interest and influence in the world of fashion, which is very much accurate. If not stylish enough in its own right, Marie Antoinette yielded an epic, in-character photo spread in the pages of Vogue, and Somewhere is essentially shaped around the goings-on of the Chateau Marmont, L.A.’s über-chic and legendary celebrity-friendly hotel. But one should suspect that fashion is just the veneer here. Like Harmony Korine’s Spring Breakers, which also teased an accessory-laden one-sheet, The Bling Ring looks primed to dig well beneath the stylish, stylistic duds, and expose a similarly provocative tale of our times, rife with youthful hedonism and its consequences.

Though it remains largely uncertain who’s who, this poster works to establish its characters, assigning each his or her own nickname and signature shades (we’ll assume, at least, that “The Mastermind” with the pink specs is Rebecca, played by top-billed star Katie Chang). That’s nifty, but what’s more interesting is the poster’s perpetuation of Coppola’s clear fascination with iconography, which has more or less made its way into all of her films’ posters. The best ad for Lost in Translation nailed, in a snapshot, the mad and beautiful bustle of a commercial mecca like Tokyo, which can leave someone feeling infinitesimal (it’s no accident that Scarlett Johansson is juxtaposed against the grandest of creatures, a hulking brontosaurus). The poster for Somewhere shows the Chateau Marmont in all its iconic glory, exalted as an entity that, again, dwarfs the drifting protagonists. Every poster for Marie Antoinette brandished an icon in the flesh, a lavish maven of the history books who, in true Coppola fashion (and, especially, in Coppola’s retelling), was as flirty and daring as she was altogether tragic.

The Bling Ring poster opts for the iconography of eyewear, specifically sunglasses, which have long stood as objects tightly bound to style, as well as things which work to conceal. That Coppola chose them to chiefly tease her film is the greatest plus for anyone anticipating it. Sunglasses are tacky, timeless shields of cool, and here, with tongue-in-cheek chic, the writer-director is all but promising to shatter those shields.

The importance of font is something that’s never been lost on Coppola either. While so many films have historically settled for generic text, be it serif or sans-serif, Coppola’s works have confidently wielded their titles as visual identifiers, and the font has somehow always held that subtle mix of serious artfulness and lightweight irony. The warm yellow of the Somewhere text all but emits the intoxicating glow of the L.A. sun, and Marie Antoinette’s pink label is a literal stamp of Coppola’s genuine, girlish artistry. The Bling Ring’s font is almost disappointingly simple, an italic pseudo-reappropriation of Comic Sans with a slight, neon-yellow glow. It may not be as striking as what we’ve seen on Coppola’s prior cover art (despite its hints of funk and spunk), but perhaps that’s the point. In this poster, the title is the afterthought. It’s really all about those lenses, through which you’re left dying to peer.