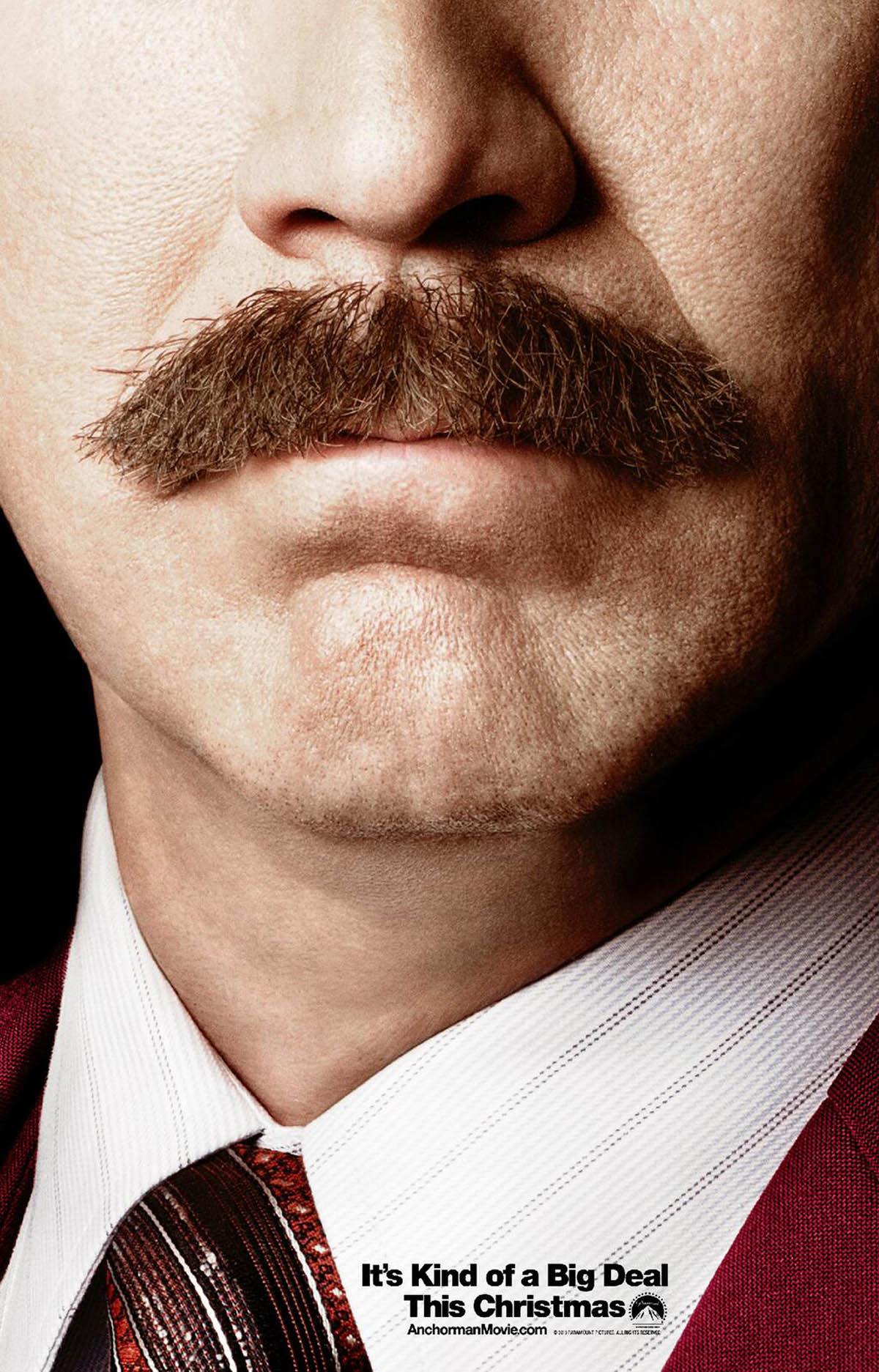 He’s back. No, not just Ron Burgundy, but The Mustache. It’s always fun, and even admirable, when a film can boast an element so iconic it becomes a virtual calling card. It’s great fodder for teaser posters like this one, which puts so much confidence in its protagonist’s facial hair that it doesn’t even bother including the film’s title (or the rest of star Will Ferrell’s face, for that matter). Anchorman 2: The Legend Continues comes just shy of a decade after its 2004 predecessor, and its enduring relevance is due to the vibrant life Anchorman found on home video, re-watched and quoted ad nauseum by college boys and anyone with a fondness for Ferrell. Burgundy is easily Ferrell’s most adored creation, a bumbling news powerhouse turned underdog who’s as arrogant as he is ignorant. His delusions of supreme grandeur encapsulate him, right down to his fashion, his hairstyle, and yes, that bushy rug beneath his nose. More apt for porn than a roundup of the day’s top stories, the mustache hasn’t been outperformed since Burgundy made his first appearance, not even by noble competitors like the yellow tuft on the cute little face of The Lorax (both ‘staches appeared on our list of 15 Famous Movie Mustaches last year). Still, despite all this, does Anchorman 2 really deserve the oh-so-millenial tagline, “It’s kind of a big deal”?

Sure, it’s a big deal to plenty of comedy buffs, and the phrase does great double duty as a reflection of Burgundy’s goofy, hopeless narcissism, but by the looks of the film’s just-released trailer, it isn’t a big deal at all—just another rote, bad-mannered, and occasionally awkward shockfest that the original helped spawn in droves. Ferrell has done some great work in his career, but Anchorman inarguably pushed him off the sell-out cliff, and allowed for dreadful follow-up vehicles like Blades of Glory and Semi-Pro (the only film I can remember actually walking out of). I know I’m not part of Ferrell’s target audience, but I’m often baffled by the mad love showered on his rude-comedy work outside of Old School, SNL, or FunnyorDie.com.

Still, whether or not the film’s tagline proves to be true, this remains one of the year’s better posters for a super-big movie, eschewing the obvious for something distinct, minimalistic, and, most surprisingly, tasteful. It’s likely—in fact, you can bet the hair on your chinny-chin-chin—that additional, similar character posters will follow, perhaps framing the mouths of returning co-stars like Paul Rudd, Steve Carell, David Koechner, and Christina Applegate. But none will measure up to this smashing, flagship one-sheet, in my mind one of the best things produced by the Will Ferrell comedy machine.