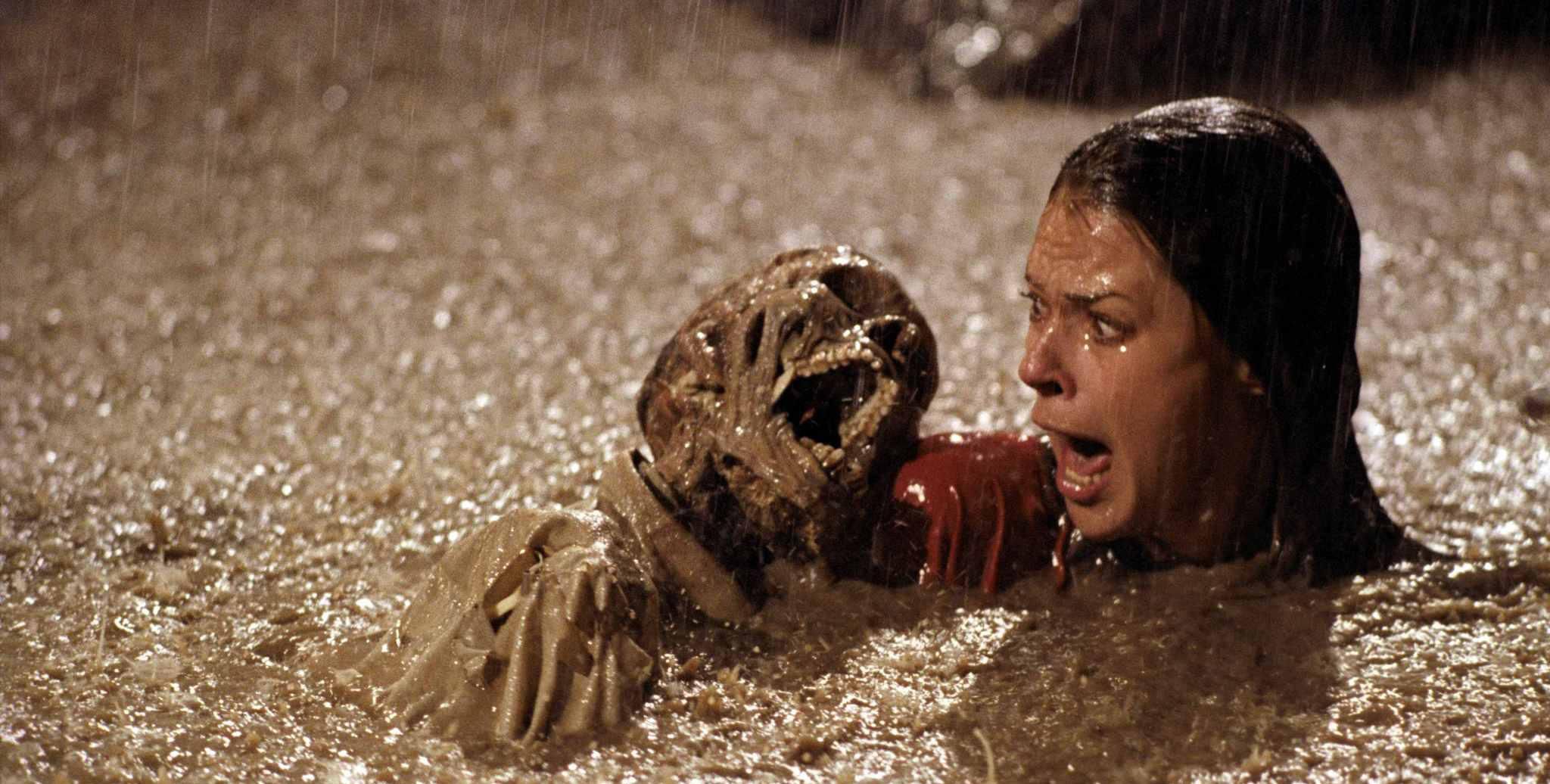 After a quarter-century, Poltergeist remains one of the most popular movies whose reputation rests almost exclusively on behind-the-scenes diversions. Who really directed it: Steven Spielberg or Tobe Hooper? Did the controversy over authorship derail the latter’s career, who should’ve theoretically sky-rocketed on the momentum between his unimpeachable classic The Texas Chain Saw Massacre and this smash hit? Is there a Poltergeist curse? Standing in front of all these basically unanswerable questions (well, maybe not entirely; the film is pretty obviously more Spielberg’s than Hooper’s) is the most professionally mounted scare show of either director’s respective body of work, though probably not the scariest if you didn’t grow up cringing at clown dolls. Poltergeist’s most canny conceit is how it takes the concept of a haunted house—up to that point a gothic, remote icon (you practically had to accept a dare and then drive halfway across the state to ever find yourself in one)—and plops it in the middle of the most mundane of all possible locations: American suburbia. Spielberg was busy doing the same thing with aliens on the set of E.T., which explains in part why he had to hire Hooper to take the reigns of the darker half of what are clearly bookend pieces.

Putting the curse aside (since no answers will come on that topic until we’ve all crossed over into the light), the questions of authorship aren’t entirely irrelevant, and the fact of the matter is that, formally speaking, Poltergeist wouldn’t be nearly as effective a film if one weren’t attuned to the hidden diametric pull between various fissuring elements. Beginning with a seemingly one-sided conversation between a little girl and her television set, and ultimately ending in an extended marathon double-climax in which secularized versions of both heaven and hell, respectively, get to state their case, Poltergeist is bifurcated right down to its very core, which is the perfect place for a film to be when it contains the immortal line: “You cannot choose between life and death when we’re dealing with what is in between.” (Not to mention a film that posits the greatest threat to the familial bond is that flickering box in the living room.)

Spielberg’s contributions to the project are self-evident and overwhelming. The Californian suburbs, nuclear families, Industrial Light and Magic, a vivacious, wholly idealized vision of motherhood that verges on Oedipal; it’s as though Spielberg watermarked the film like Pathé used to do in the early days of cinema. One could be unkind and say Spielberg, in making both E.T. and Poltergeist, was trying to suggest that the life of little boys might be all about fantasy and interstellar understanding, but it would be hell to have to be a little girl. That said, Hooper’s hand is occasionally discernable. The film’s second, almost unfairly diabolical climax—which Spielberg, despite having written the script, purportedly declared his least favorite section of the film—would seem to be a nihilistic expulsion of the suburban dream that, even at his most anarchic, Spielberg simply wouldn’t have the guts to follow through on (not, at least, with his name on the picture). He’d done corpses and gore before (need anyone be reminded of the various atrocities of the Indiana Jones series?), but flushing the bastion of mid-American, 3,000-square-foot utopia down the supernatural toilet? To quote Carol Anne, uh-uh.

What came of the wreckage of Poltergeist, aside from the lesson (which Joe Dante apparently took to heart before making Gremlins) that if you’re going to direct a Spielberg film, you’d do well to make your satirical tones blunt? Ultimately, we have a total anomaly: a PG-rated, resolutely un-family-friendly, mega-budget, overproduced, wildly commercial ghost story that basically does nothing more than lurch from one splashy, effects-driven spectacle to the next (if you came to the film at roughly the same age as Carol Anne, it was that rare and elusive film with only good scenes) and still manages to be its own best metaphor for Hollywood authorship. Poltergeist is the most sensation-dependent film of Spielberg’s career, and, in its demolition of the Spielberg mystique, may be the most subversive film of all Hooper’s work. It’s one of the strongest films in either director’s canon, and yet it’s eerily impersonal. Collaboration can be a scary thing. Consider that thought against the suburban spectacle of two neighbors waging remote control war from either side of a nondescript wooden fence.

Review: The Living and the Dead