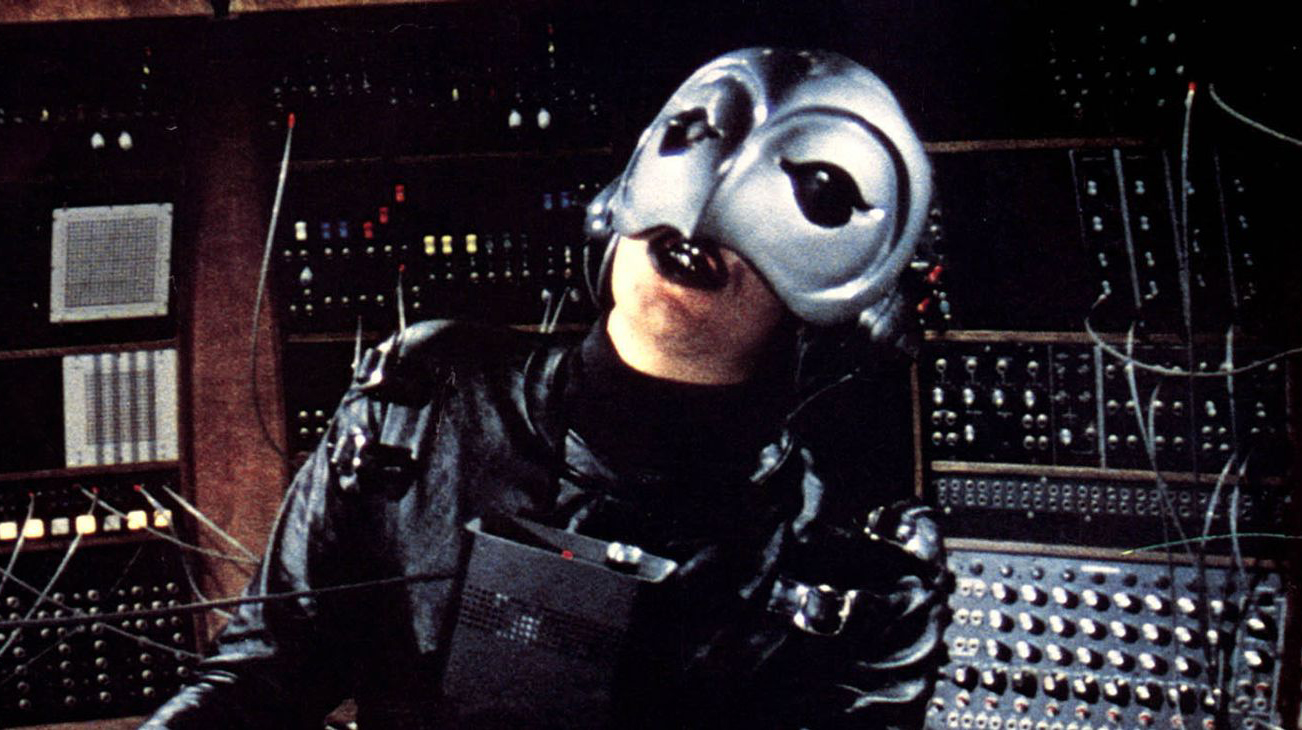 Where Brian De Palma’s homage to cinema’s past glories in Sisters was neatly sewn into the fabric of its narrative, in Phantom of the Paradise it just about bursts gloriously at the seams. Hitchcock is here, of course, in the funniest Psycho parody ever filmed, but most of the allusions in this baroque fantasy are paraded with an eye for gothic classicism: Faust, The Phantom of the Opera, Frankenstein, and The Picture of Dorian Gray, among others, provide the canvas onto which De Palma splashes his overwhelming filmic mojo. The film has the feeling of having been a liberating experience for the director, in allowing him to not only bring to the fore the referential facet that runs through his oeuvre from day one, but also to sustain for the entire 92 minutes the delirium of Sisters’ transgressive concluding sequences.

William Finley, the previous film’s chauvinistic villain, gets the role of his career as Winslow Leach, the songwriter whose masterwork, a “rock cantata” retelling of the Faust legend, is stolen by Swan (Paul Williams), the unscrupulous owner of Death Records; framed and ruined, Winslow gets his face sizzled off in a smoldering record press, then dons leather suit, cape, and metallic mask to haunt the Paradise, Swan’s elaborate rock venue, as the Phantom. De Palma understands the intensity of ‘70s rock as the successor to opera’s shuddering arias, and the fervent charge of music electrifies the visuals without succumbing to the meth-oppressiveness of Tommy. From start to finish, no scene feels “dead”: Whether it’s the hero’s first encounter with fickle muse Phoenix (Jessica Harper, soft and corruptible), a stint at Sing-Sing, or an audition for various musical styles, no occasion is too insignificant for a prowling POV, a handheld tilt of the camera, or any other form of wanton restlessness that De Palma’s blessedly adolescent impatience utilizes.

As in that other great musical spoof, The Girl Can’t Help It, however, Phantom of the Paradise draws withering links between product and consumer. A hipster-Mabuse figure, Swan materializes in tinted shades and golden locks to a gust of organ music and, like De Palma’s malevolent overlords, proceeds to manipulate images and sounds from inside his booth, fine-tuning the Phantom’s mangled vocal chords until his warbling is ready to be packaged and sold to audiences with bigger and more morbid appetites. In a touch worthy of Tashlin, Death Records’s main group, the Juicy Fruits, go from greasy-haired doo-wop to ‘60s beach inanity to Kiss-styled pyrotechnics in the course of the film, with concertgoers literally contributing to the on-stage assembly of “ambiguous” superstar Beef (the inimitable Gerit Graham). That the loudest applause is reserved for Beef’s electrocution bears out De Palma’s awareness of how easily radicalism can be morphed into spectacle for the bloodthirsty public, the feeling that Swan’s “That’s entertainment” declaration is lined with his talent-scout’s blunter summarization (“Nobody cares about what anything’s about”).

“Dream it never ends,” Winslow sings at the piano as the camera swirls lyrically around him. De Palma’s cinema frequently draws on the medium’s oneiric affinities, and Phantom of the Paradise progresses as a darkening reverie from which escape is revealed as unattainable; the hero’s blood-sealed contract with Swan locks their souls together, and only the rebellion of protégé against master (to be later followed and enriched in Obsession, The Fury, Raising Cain) can lead to liberation, even if that means death. Earlier in the picture, De Palma stages the characters’ interlocked destinies (as well as a sly shout-out to the Welles of Touch of Evil) with parallel tracking shots that finally merge into a single image as the explosion of a time-bomb dismantles the split-screen’s barrier. Another blast is needed to rupture the Faustian bond connecting the Phantom and Swan, provided at the film’s splendidly tumultuous climax, a jolting extravaganza where the death of a character is scheduled to be telecast and the bacchanalian bloodletting that ensues points to the stupefying catharsis of Carrie while revisiting the turbulence—and the implicating roles of the audience—of Dionysus in ‘69. De Palma’s volcanic comedy concludes with the macabre yet liberating orgiastic jousting between creation and creator, not just between the Phantom and Swan, but also between spectacle and viewer. Only the film’s audience, too caught up in the euphoria of the show, remain oblivious to the real horrors on display.