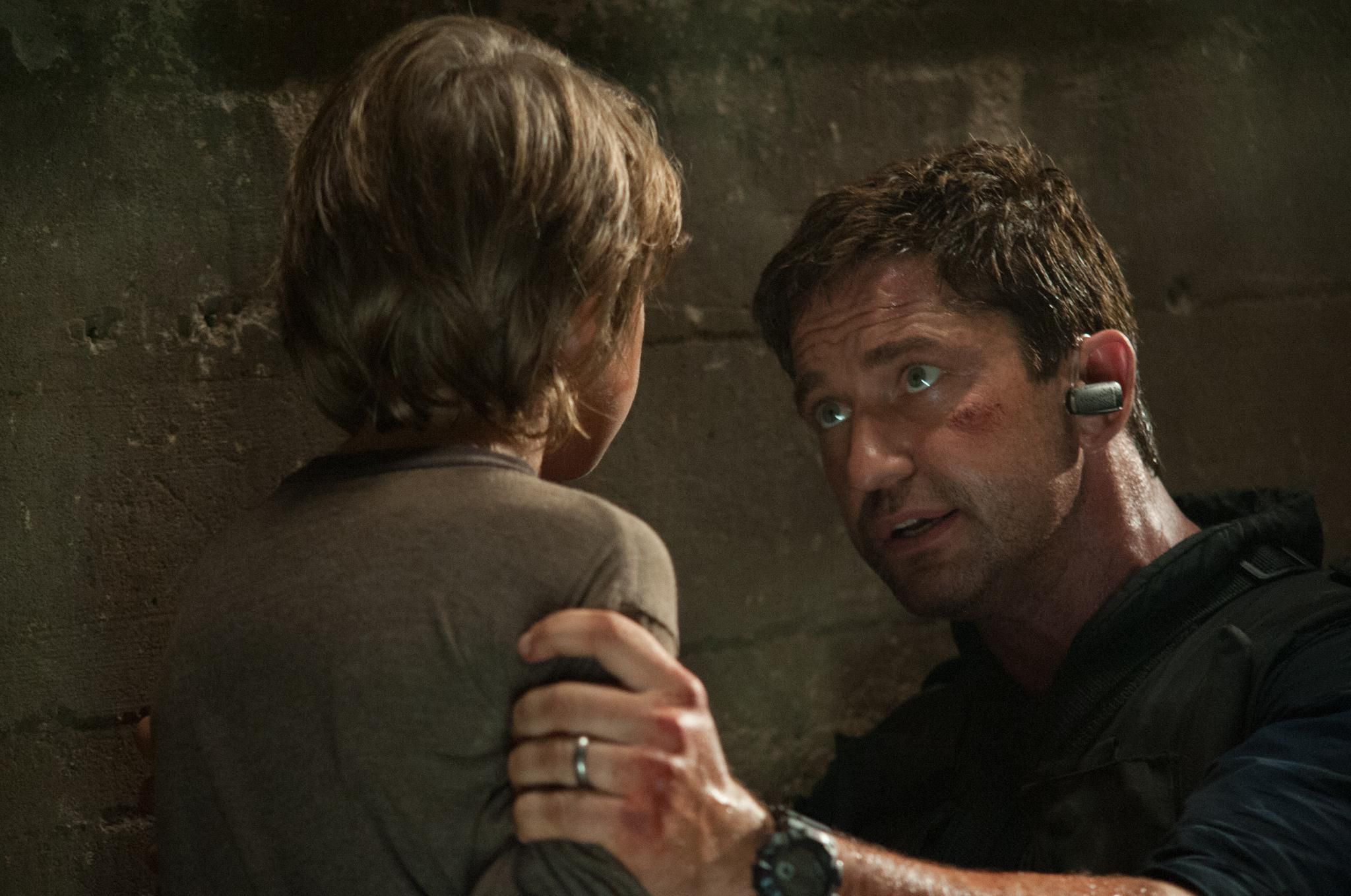 Antoine Fuqua’s Olympus Has Fallen spends its first act establishing a flimsy emotional groundwork before gleefully taking a sledgehammer to it just seconds into act two. Former secret service agent Mike Banning (Gerard Butler), sequestered in a desk job with the Treasury Department six months after narrowly saving President Benjamin Asher (Aaron Eckhart) at the expense of First Lady Margaret Asher (Ashley Judd), glances out of his window to see a full-scale White House siege in process, taking it as a call to arms and a return to action despite his exile. Everything up until this point—from the maudlin tragedy which opens the film to the prosaic exposition which follows—has closely followed Fuqua’s house style, a particular brand of “gritty” self-seriousness is well-suited to thriller material this beige, and the action to come seems ready to merely follow the expected motions. But then the film suddenly pivots: A 15-minute blitzkrieg on the White House lawn, in which ostensible tourists become terrorists and garbage trucks transform into impromptu assault vehicles, takes the action from sober efficiency to an almost gonzo blockbuster spectacle, loaded with the sort of exaggeratedly stylized gunplay one expects from an early John Woo movie. It’s not quite parodic (it stops short of the cartoon physics and noir-riffing zingers of last year’s widely underrated Lockout), but it nevertheless becomes, from this point forward, a refreshingly self-aware genre exercise, embellishing its exploitative qualities and mostly discarding the rest.

This gently mocking impulse is never more apparent than when the action enters the locked-down White House and Butler, clearly in on the joke, fully adopts the John McClane persona on which his character is obviously based. Olympus Has Fallen is the rare case of a film which succeeds simply by virtue of tracing the outline of a better movie: Of the great many films since 1988 to follow the reliable “Die Hard on a ____” template, from Speed to Under Siege, Olympus Has Fallen embraces it the most wholly, lifting not only the fundamentals of the premise (terrorists seize a valuable building with hostages, unaware that the quintessential One Man Who Can Stop Them is on the premises), but even specific sequences from the source material. Some minor references seem like distant echoes of a work whose presence is deeply embedded in the genre’s canon; others are bought up wholesale and delivered with a wink. The most blatant citation, and perhaps not coincidentally the highlight of the film, finds Butler’s lone gunman sardonically trading barbs with terrorist leader Kang (Rick Yune) over two-way radio, and it practically plays out as an outright reenactment of one of Die Hard’s most iconic scenes—though here the hero has a different catchphrase with which to sign off: “Let’s play a game of Fuck Off. You go first.”

Amusing one-liners and lightly comic touches abound, and Olympus Has Fallen, certainly aware of their appeal, happily luxuriates in their self-styled inanity. Morgan Freeman and Robert Forster, playing presidential stand-ins in a Dr. Strangelove-esque War Room, ham it up grandly while barking out important-sounding orders, with Forster in particular making splendid use of the script’s many instances of “fuck.” Told at one memorable juncture by Butler that “this ain’t gonna be a cakewalk” because “these sonuvabitches are fuckin’ tough,” Forster explains that he has “the fuckin’ toughest guys in the world,” a great action-flick exchange typical of the film’s idea of dialogue.

In cases like this, simply recognizing the ridiculousness inherent in the genre and exaggerating that quality rather than attempting to suppress it elevates the film above the bulk of its dour and wholly self-serious contemporaries—including literally every one of Fuqua’s earlier films, whose urban grit lacked even a whiff of levity or self-awareness—and it makes Olympus Has Fallen, oddly enough, truer to the spirit of the original Die Hard than any of the official sequels. Part of the appeal of the formula has always been watching a kind of looseness of action and comedy within a dramatic system that’s tightly controlled, and the later Die Hard films tend to fail when they rely too heavily on one side of that equation, feeling overdetermined when they should feel casual and seeming to meander when they should be taut. It’s a tricky balance that Olympus Has Fallen somehow stumbles into getting right.