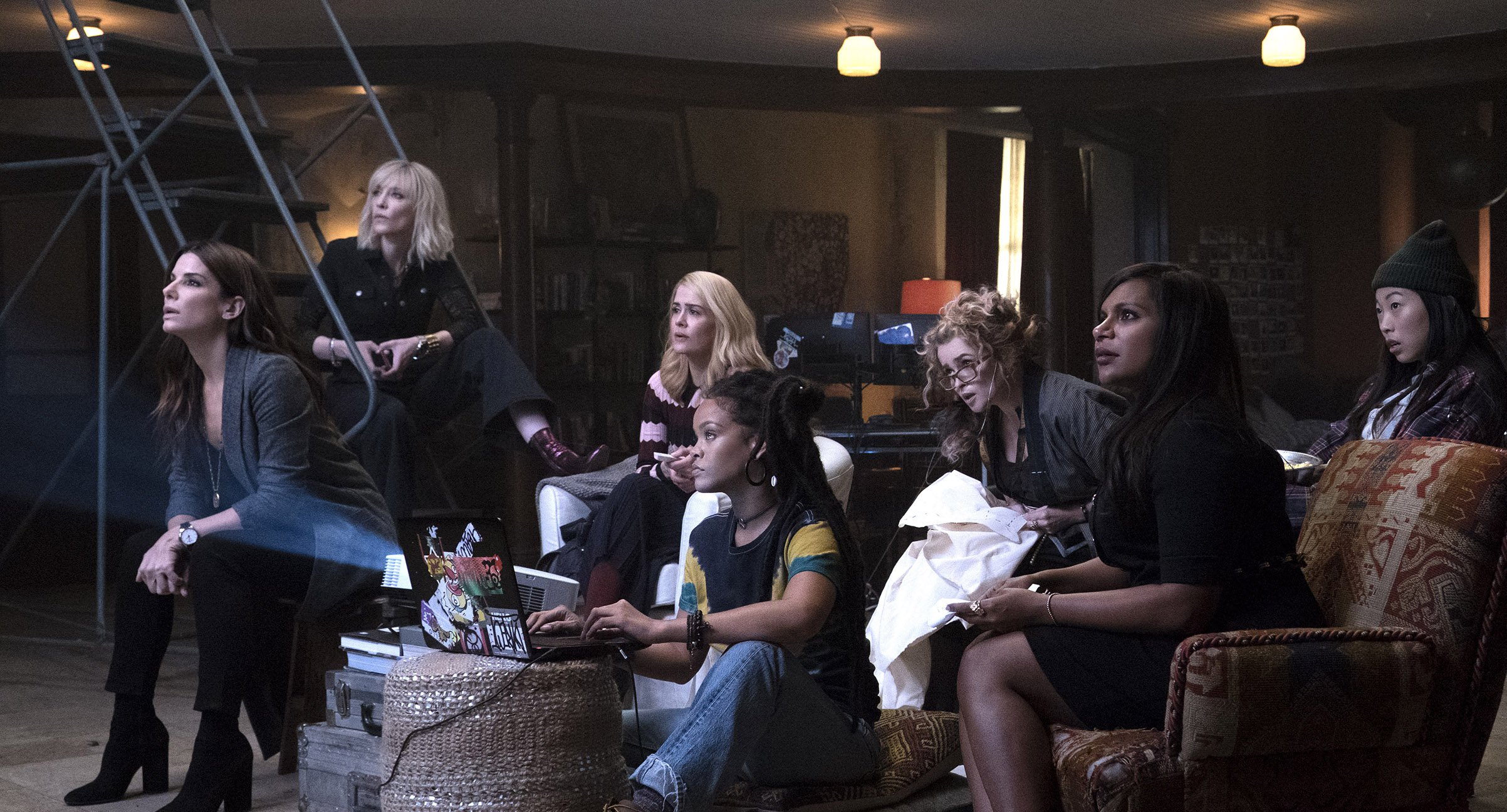 With Ocean’s 8, Gary Ross serves up a mildly engaging riff on the heist film, but he rarely strays from the established formula of Steven Soderbergh’s original Ocean’s trilogy. As Debbie Ocean, sister of George Clooney’s Danny Ocean, Sandra Bullock brings wittiness and likability to her role as a thief with the ambitious goal of stealing a $150 million diamond necklace off the neck of a heavily guarded movie star at the Met Gala. Would that the film, unlike Debbie and her sisterhood of thieves, were anywhere near as ballsy.

Debbie’s chic yet punk right-hand woman, Lou (Cate Blanchett), initially warns Debbie to lay low following her recent five-year stint in prison before quickly buying into her friend’s carefully crafted plan. This duo’s friendship is the fulcrum of Ocean’s 8, and when Bullock and Blanchett share the screen together, the film comes together in a warm rush of camaraderie.

While the stage is momentarily handed over to each of the remaining five members of Debbie’s team, none of them pair up in a manner that allows for any sparks of comedic rapport. Each one is defined entirely by their role in Debbie’s operation: Amita (Mindy Kaling) the jewel expert; Tammy (Sarah Paulson) the mover of stolen goods; Nine Ball (Rihanna) the hacker; Rose Weil (Helena Bonham Carter) the fashion designer, who convinces Daphne Kluger (Anne Hathaway) to wear the rare necklace to the Met Gala; and Constance (Awkwafina) the skater-brat pickpocket, who’s responsible for snagging the jewels right from Daphne’s neck on the night of the big party.

Much of the film’s first hour is spent methodically introducing each of these characters with paper-thin backstories that become all but irrelevant once the group’s heist is put into motion. Only Hathaway is given any room to flesh out and have fun with her part, a self-aware parody of the coddled movie star. Of course, the raison d’etre of any Ocean’s film is the heist, and to Ross’s credit, his centerpiece is a handsomely mounted sequence that’s both clever and suspenseful as the numerous, and heretofore unknown, pieces of Debbie’s master plan fall into place in meticulous, almost clockwork fashion.

And while part of the film’s pleasure lies in watching it turn a typically male-dominated genre on its head, Ocean’s 8 avoids cloyingly winking at its representational strategy. The few acknowledgments of this purpose are slyly integrated into the very fabric of the story, such as Debbie’s apropos statement about why she wants her squad to be all-female in the first place: “A him gets noticed. A her gets ignored. For once, we want to be ignored.”

Once the heist is done, though, the film’s final act is almost bafflingly taken over by a lengthy insurance case that brings out a few more twists but little in terms of actual stakes. James Corden, as fraud investigator John Frazier, is well used as some late-in-the-game comic relief, but his presence only takes the focus further away from the women in Debbie’s crew who’ve been primarily sidelined to obligatory montage sequences since their initial introductions. Had the filmmakers fully fleshed out these characters, given them more of a purpose, perhaps Ocean’s 8 could have withstood the absence of any real adversary for Debbie and her gang. Instead, it stumbles awkwardly into its finale at least 30 minutes after what is easily its most memorable sequence, making what was at times effortlessly breezy feel belabored and clunky.

Interview: Toni Collette on Getting Maniacal for Hereditary