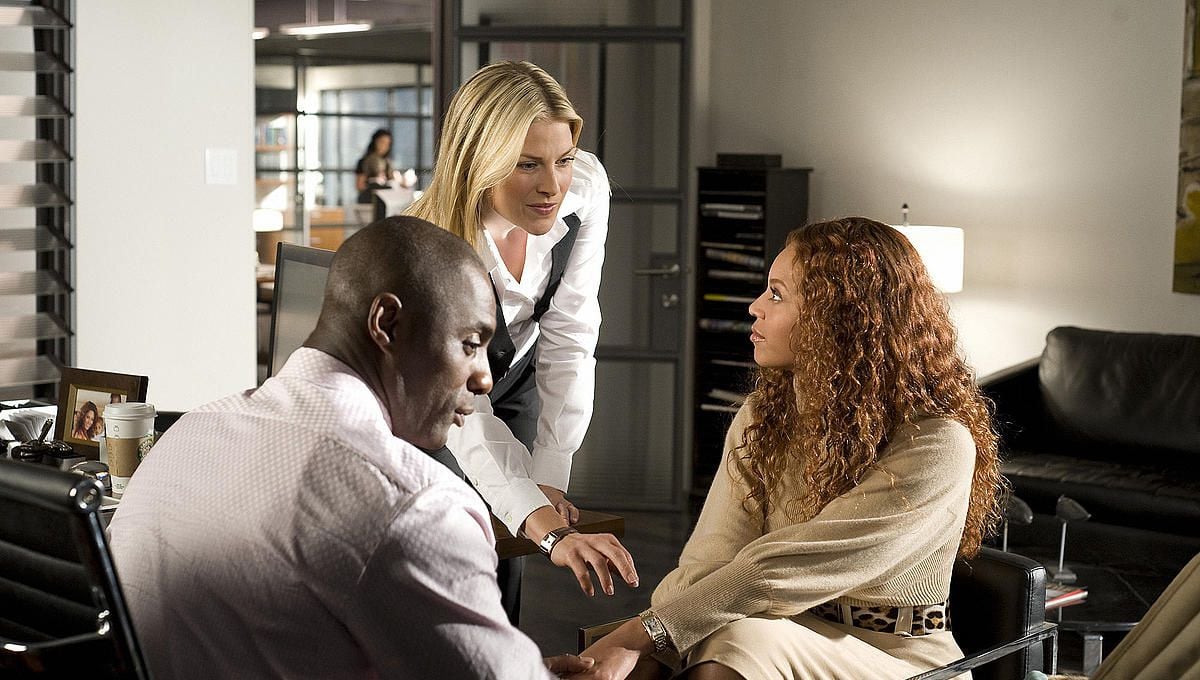 A hysterical male victimhood nightmare in the Fatal Attraction mold, Steve Shill’s Obsessed takes a crazy-adulteress premise, gives it a brazenly racialized spin, and then to top things off, transforms the entire affair into a waiting game for spurned wife Beyoncé Knowles to slap the bitch out of lunatic maneater Ali Larter. The big dog in the middle of this catfight is Derek (Idris Elba), a VP at an asset management firm whose life is thrown into infidelity disarray when the new temp, Lisa (Larter), turns out to be a righteous fox both in the physical and predatory sense. Since Derek wound up marrying his last female assistant, Sharon (Knowles), he’s initially reluctant to tell anyone about Lisa’s aggressive enticements—first in a bathroom stall during the Christmas office party, then in his car when she turns out to be wearing a trench coat and little else—lest he arouse suspicion from both co-workers and wifey.

Of course, a little bit of guilt for leading Lisa on also compels his silence, though if there’s a gaping plot hole in the center of Shill’s B-movie, it’s that Derek inanely keeps quiet about Lisa’s psychotic behavior and, once things spiral out of control, barely works up any energy mounting a serious defense. Of course, inspecting Obsessed too closely will only cause migraines—and guffaws. Not to mention that it’d spoil all the base, tawdry entertainment value of watching hetero carnivore Larter set an exquisitely deranged plan to nab Derek, which involves, but is not limited to, memorizing his daily routine, ordering him a “filthy” martini, shaking her ass in his crotch on the dance floor, breaking into his house to cradle his (apparently deaf and dumb) son, and giving him roofies and seemingly raping him before trying to commit OD suicide in an attempt to expose their phony affair to the world.

Shill doesn’t get fancy building tension from his nonsensical male-anxiety mayhem, allowing Knowles’s beguiling fierceness and Larter’s sexualized cunning to carry much of the prurient load. While the film seems tailor-made for more melodramatic madness than eventually materializes, and Derek in particular becomes increasingly frustrating and insipid prey thanks to a script that denies him real initiative, the film’s emphasis on innuendo-laced come-ons and unhinged machinations has a campy allure. Even if, ultimately, Knowles’s eagerly-anticipated climactic one-liners (“I’ll show you crazy. Just try me, bitch!”) don’t quite live up to Larter, with amusing frankness, telling a dense detective (Christine Lahti) that she’s Derek’s “Loverrrr.”