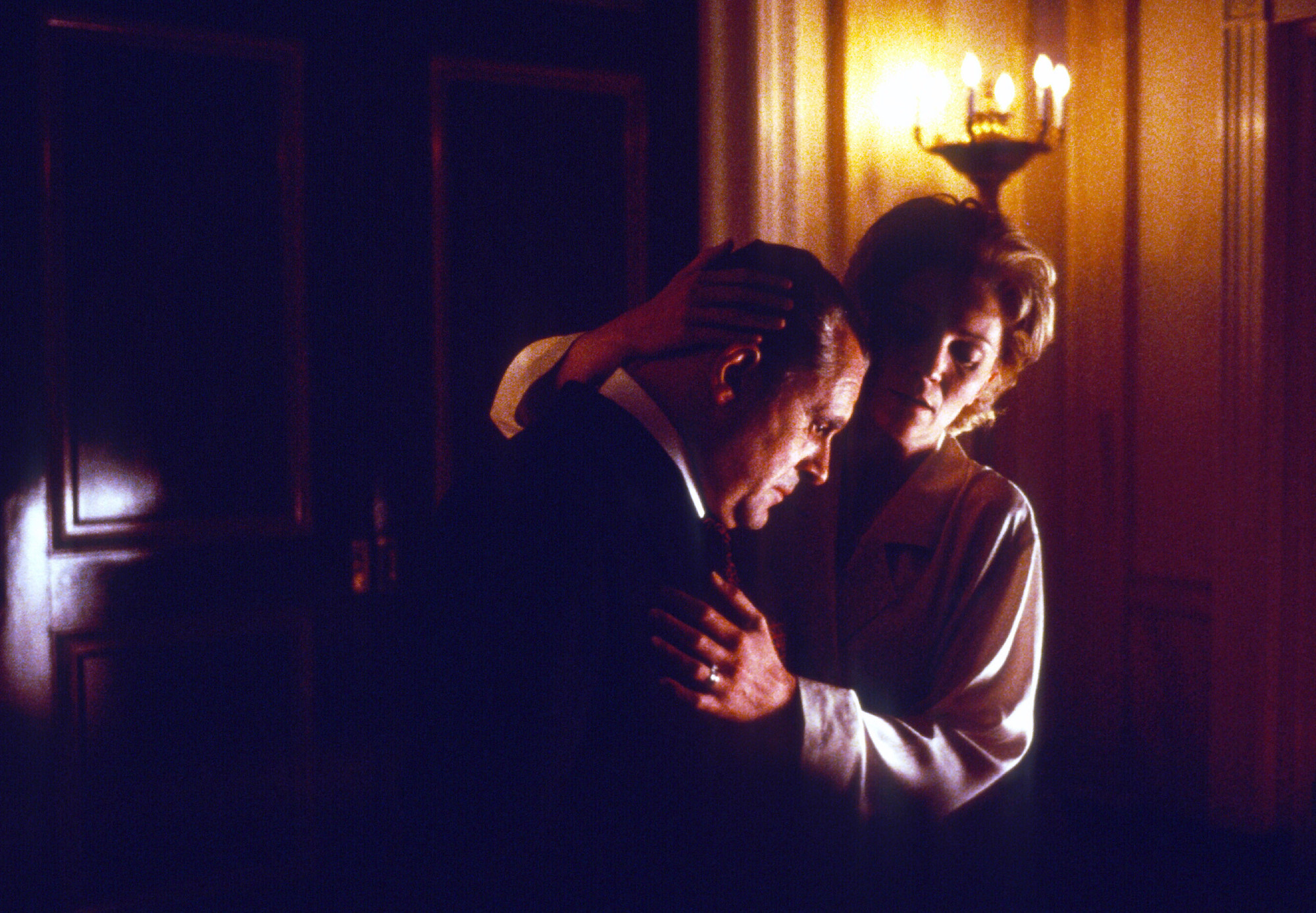 Overviews of Oliver Stone’s career tend to focus on his status as a political provocateur, and not without good reason. His films and public appearances reveal a fierce political intelligence, sometimes outrageous but always outspoken, and even his more ideologically measured films seem extreme due to his experimental visual techniques. Often forgotten among the discussion of Stone the activist and stylist is the director’s humanism, his interest in the individuals lost within the maelstrom of history and politics: Richard Boyle in Salvador, Ron Kovic, Jim Morrison, JFK’s Jim Garrison. In 1995’s Nixon, Stone found perhaps his most complex and unlikely protagonist: Richard Milhous Nixon, one of the most hated men in history for the liberal Americans of Stone’s generation.

Nixon is, then, a staggering work of empathy for Stone, seeking not to forgive Nixon but to simply understand him, to examine what made him tick, what made him capable of both his significant successes as President and his unforgivable failures. As portrayed by Anthony Hopkins in a truly remarkable performance, Stone’s Nixon is, surprisingly, a man of great ideals—wrongheaded and dangerous ideals, no doubt, but not the beliefs of the soulless and evil man that many still see him as—haunted by his own perceived inadequacies, which Stone traces back to Nixon’s Quaker upbringing. Some of these childhood scenes, featuring Mary Steenburgen as Nixon’s mother, come dangerously close to subsequent biopics like Ray and Walk the Line, in which a man’s entire life is lazily traced back to a single traumatic incident, but Nixon for the most part avoids such cheap psychoanalysis. Instead, Stone takes what we know or can infer about Nixon and tries to imagine the type of man who could contain these multitudes, these layers of intelligence, self-loathing, sadness and hate.

Conservative historians have taken issue with some of Stone’s characterizations, but though there’s very little in the film that doesn’t jibe with what is now commonly accepted about Nixon’s character, historical accuracy isn’t really the point. Nixon is a very personal film; it’s dedicated to Stone’s father Louis, who the director has compared to Nixon in background and temperament, which reveals something about Stone’s approach to the material. He is looking at his own beliefs about Nixon, examining what Nixon meant to and about the country and the office of the President.

This approach is mirrored in the aesthetics of the film. Stone’s frenetic visuals have been accused of being flashy and showy, but in Nixon, as in JFK, his seemingly random choices serve a useful purpose. In JFK, the rapid editing symbolized the paranoid confusion surrounding the Kennedy assassination. In Nixon, the shifts in film stock, the jumps between color and black and white, suggest the various ways in which Americans reacted to Nixon and bring to mind the formal and political strategies of Eisenstein and Godard. Stone has absorbed these men’s theories of montage, from his use of meaningful cutaways (such as the shots of flowers being watered in Nixon’s conversation with C.I.A. Director Richard Helms) to the Chinese and Russian characters superimposed on the screen during Nixon’s talks with Mao Zedong and Leonid Brezhnev, which serve as reminders that what we are watching is not documentary but a reaction to and absorption of a political history.

Stone’s wide-angle compositions (which move in for expressive close-ups during Nixon’s more emotional moments) frequently frame Nixon in the same shot as portraits of great presidents like George Washington, FDR and, especially, Abraham Lincoln and John F. Kennedy. This represents Nixon’s obsessive relationship with these men—Lincoln is his idea of the ideal president, coming from nothing and nowhere to unite the country, and Kennedy representative of his mistrust and jealousy toward wealth and privilege—but also Nixon’s place among these men as one in a line of many who have held and been held by the responsibilities and power of the presidency. Perhaps the most insightful character in the film is a 19-year-old college student who confronts Nixon and describes the American political system as a “wild beast,” uncontrollable by any one man. In Nixon, Stone looks at one man who, whatever his monumental flaws and sins, tried and failed to control that beast and destroyed himself—and, almost, his country—in the process.