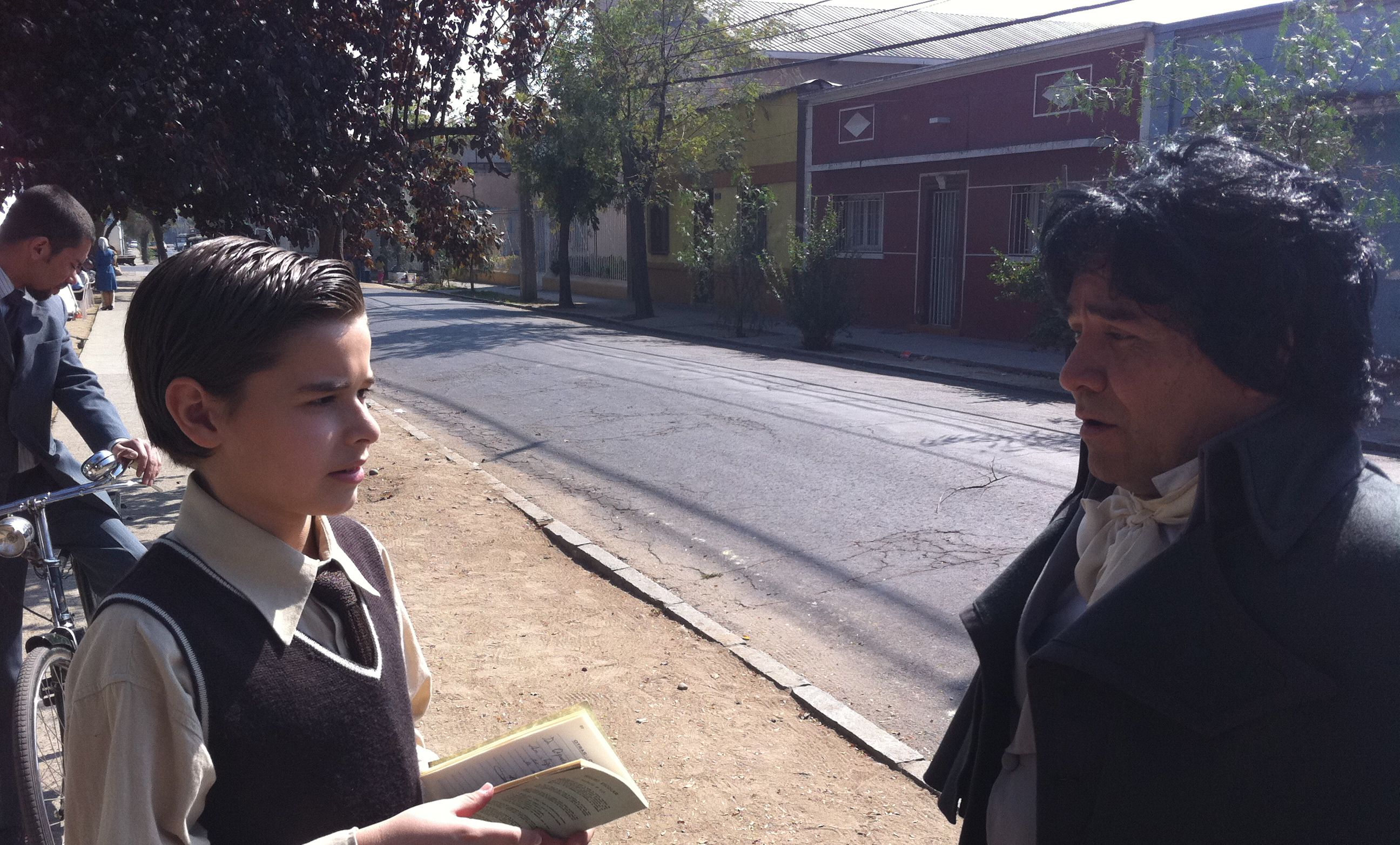 It’s a bit crass to suggest that new films by the late master Raúl Ruiz are appearing like posthumous Tupac B-sides, but conclusive data on what’s still to come remains sparse. Night Across the Street is the second of two 2012 films yielded from his posthumous estate, and the only one for which he actually sat at the helm. Not surprisingly, unlike Lines of Wellington, which was prepared by Ruiz but directed by his widow, Ruiz-ness dominates every aspect of Night Across the Street: conceptually, structurally, aesthetically, you name it.

It’s also a final film in the specific sense of Ruiz designing the larger part of it around a metaphorical contemplation of his own, imminent demise. Not all departed auteurs are able to make use of those conditions. In almost all cases, the director either lives on for some time after his last work (like John Ford and Howard Hawks), while others leave us rather abruptly (Yasujirô Ozu and Pier Paolo Pasolini), casting their swan songs in a rather circumstantial light. In this case, Ruiz has made a variation on Jean Cocteau’s Testament of Orpheus: the auteur bidding himself goodbye, and guessing correctly that we’ll celebrate his imagination and passion from our theater seats.

Whereas Cocteau played himself in Testament of Orpheus, Ruiz casts veteran Chilean actor Sergio Hernández as Don Celso Barra, his on-screen surrogate, a slightly demented old man on the eve of his retirement. Celso is a compact gentleman in a coat two sizes too large, and his gently put-upon status at the office (a Melville-esque office that gets no customers, but seems to have something vaguely to do with shipping or shipbuilding) recalls Edward G. Robinson in Fritz Lang’s Scarlet Street, minus the emasculated home life that leads him to double as a painter and pine for a younger woman. He also carries an alarm clock in his pocket, to remind him to take his meds. Around him orbit characters from his real life, his memories, his fantasies, and the zones between the zones.

This being Ruiz, that’s only the tip of the thematic and narrative iceberg. Shooting in high-definition digital video, as he did with Mysteries of Lisbon and Nucingen House, Ruiz, like Michael Mann, is fearless in foregrounding the un-filmic qualities of video if it means achieving effects (and there are many different kinds of effects in his arsenal) that are uniquely breathtaking or tactile in the digital realm. Brightness and color latitudes are strained to their breaking points, but Ruiz’s sense of empowerment, earned many times over since his earliest experiments, characterizes these fissures with a sense of happy-go-lucky defiance that’s not only thrilling, but is also thematically significant.

The short definition of surrealism, as practiced in the cinema from Buñuel onward, is the artistic free transit, back and forth across such borders, namely the one dividing our dreams and waking lives. As anyone who’s ever dozed off unexpectedly will attest, conscious thoughts have a habit of dissipating, like smashed atoms, whirligig fashion, as they collide with the beachheads of the unconscious mind. This is Ruiz’s bread and butter, only with one addition: death. Death has, of course, been a featured player in all his films, but in Night Across the Street, it’s the villain. And against this beachhead, all things must fade to black.

In the tradition of the self-memorial, whether by Fellini or Cocteau, familiar faces appear and reappear, as flashback and fantasy become one. The young Celso (Santiago Figueroa) pals around with Beethoven, who panics in a movie theater and tries to “conduct” a Budd Boetticher western, calling to mind a similar outburst by Orson Welles’s Don Quixote. There are also scenes with Long John Silver (Ruiz made a version of Treasure Island in 1985) and, as an adult, the French author Jean Giono (The Horseman on the Roof). Rather than serving as independent variables in Ruiz/Celso’s stream of consciousness, Beethoven, Silver, and Giono are fellow travelers, often suffering the same perplexity at Celso’s free-associative psychology, and often taking different forms: Beethoven reappears as a bust on a dinner table, while Silver seems to grow elderly and decrepit to keep pace with Celso, who is, of course, a Jim Hawkins-like boy in his youngest incarnation.

Across the film’s second half, as is sometimes his wont, Ruiz begins to cast aside the genteel, tradition-of-quality trappings misleadingly suggested by the first act and indulges in the lurid fancy of pulp fiction and horror. A gun appears and changes hands as the narrative’s compartments subdivide like Mandelbrot sets. There will be blood, and there is, as there are also cheatin’ hearts, fits of pique, and impromptu séances. If there’s any structural weakness to Night Across the Street, perhaps it’s that the saying-goodbye-to-himself motive has some unavoidable sentimental baggage, and Ruiz is a little bit too cool a customer for anything like that. As always, he assembles a bouquet (if a bouquet was on the scale of a chandelier) of talismanic wordplay, doubled objects and meanings (for example, the gun barrel becomes a tunnel between this world and the next), and imagery both sacred and profane, but the film seems to deflate as it tries to reconcile the cosmic playfulness for which he’s known with a decidedly more unilateral farewell party. As a last pass through this Chilean visionary’s holographic dreamscapes, however, it’s one hell of a goodbye.