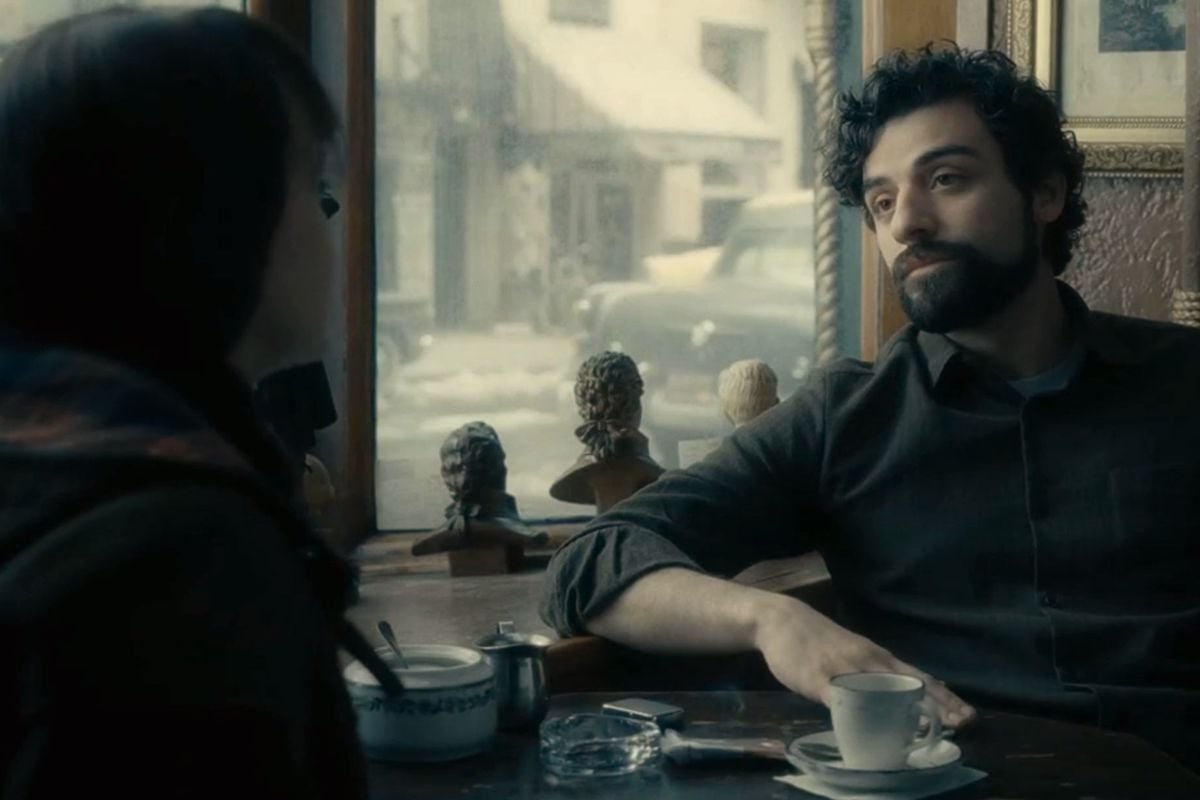 “An odyssey where the main character doesn’t go anywhere,” as Ethan Coen put it in the Q&A after the New York Film Festival press screening of the film, Inside Llewyn Davis begins at the Gaslight Café, a fictional Greenwich Village coffeehouse, in 1961. After watching the title character (a mesmerizing Oscar Isaac) perform a soulful interpretation of an old folk song and then get beaten up in an inky back alley, we circle back in time to follow him as he couch-surfs his way around New York, hitches rides to Chicago and back, and visits, you suspect, just about everyone he loves or needs something from: his enraged ex-lover, Jean (Carey Mulligan); his sister (Jeanine Serralles), whose patience is fraying fast; his impossible-to-please father (Stan Carp), who’s wasting away in a nursing home; his deceptively abusive, apparently avuncular agent, Mel (Jerry Grayson); and the kind, middle-aged couple (Ethan Phillips and Robin Bartlett) whose comfortably bohemian-ish apartment is the closest thing Llewyn has to a home base.

Over the two days covered in the movie, Llewyn gets two chances at a big break. He performs T Bone Burnett’s arrangements beautifully both times, but that doesn’t matter: Like so many other genuinely talented people who just never get lucky, he winds up like the movie, back where he began. Hyper-attentive to telling details as it anatomizes a particular place and time, and studded with comically exaggerated characters that never feel less than fully human, Inside Llewyn Davis dances along the line between tribute and (loving) satire, like Philippe Petit between the Twin Towers. Just as you start to snicker at the self-serious young beatniks smoking soulfully in the audience, or at the quartet in fishermen’s sweaters who sing nasal Irish folk songs, lingering a little too long on their consonants, here comes Llewyn, seducing us with his soulful sincerity and the spare beauty of the songs that he sings. Even the light is intense when he’s on stage, broad rays of blinding white fighting their way through shrouds of cigarette smoke to illuminate his big brown eyes.

Like the folk scene it immerses us in, Inside Llewyn Davis is intrigued by authenticity—what it’s worth, what defines it, and the irony of thinking you can find your true self by fitting into the narrow constructs of a soon-to-fade fad. It also has lots of points to score, in a roundabout, masse-shot kind of way, about the charming narcissism of youth and the extent to which professional performers are obsessed with creating and honing their images—like the rest of us, only times 10.

All those points hit home only because the Coens and their collaborators get the look and the feel and the sound of things so right. You sense it in your bones when Llewyn slips off a shoe in a diner to give his sodden sock a chance to dry out, or gets beaten in an alley by a man who emerges from the shadows to hit him like a piledriver. And the album covers the filmmakers created for their fictional musicians are so perfectly evocative of the time and place and sensibility they’ve resurrecting here that you don’t know whether to laugh or cry as they strain to be “real.”

Fantastic Fest 2013: Coherence, Patrick, Why Don’t You Play in Hell?, & The Congress