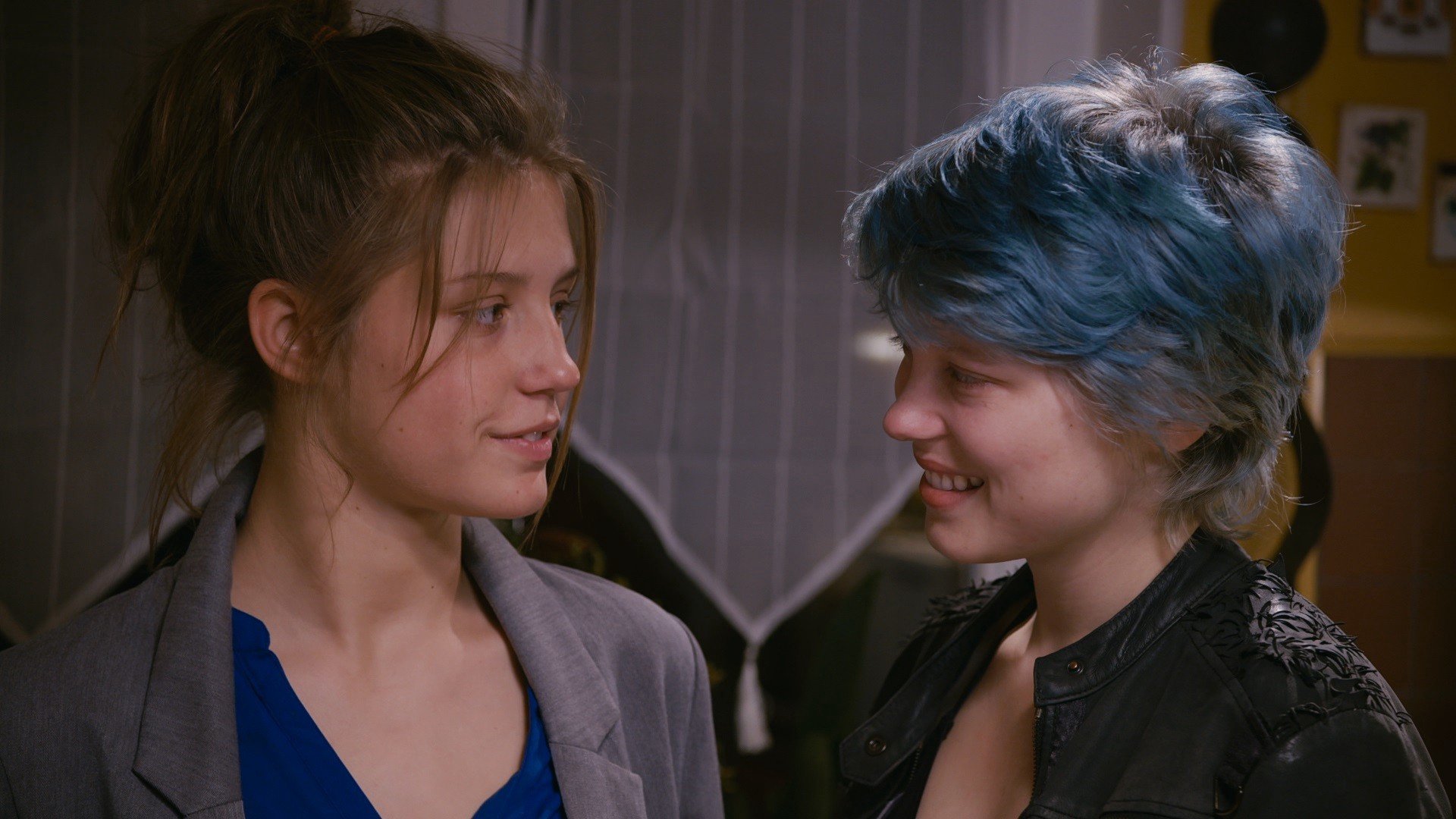 After one of their titanic lovemaking sessions, Adèle (Adèle Exarchopoulos) teasingly asks Emma (Léa Seydoux) for a grade. Leah assigns her a 14 (out of 20 on the French grading scale), adding gently that she needs a little more practice. “I’ll give it all I’ve got,” Adèle promises. That promise is kept in spades, by both character and actress, in Abdellatif Kechiche’s deeply felt story about a sympathetic young woman’s passage from adolescence to young adulthood and the first love that helps her find her true self. Seydoux is a worthy match for Exarchopoulos as the older and more experienced of the two (Emma is in art school and Adèle in high school when they meet), exuding the cool self-confidence of her character’s haute-bourgeois background along with a charismatic artist’s seductive ability to make whoever interests her feel truly seen and understood.

“It’s strange, because it’s me and it isn’t,” says Adèle of the first sketch Emma does of her, a statement that may also describe her feelings about the relationship she’s embarking on. Adèle has a lot to deal with as the story begins, not just surrendering to true love, but coming out—at least to herself, since she remains closeted at home and at school—as gay or, more likely, bisexual. (Kechiche never spells out just where she lands on the sexual continuum.) The camera stays close as she goes through a series of tentative firsts, shy but never self-doubting as she wanders through a gay club, participates in a gay pride parade, and experiences her first lesbian kiss—and the pain of her first rejection as the girl brushes her off the next day, claiming her come-on had been “just a spur of the moment thing.”

The long love scenes between Emma and Adèle have garnered a lot of attention in discussions of Blue Is the Warmest Color. It’s true, they’re unusually lengthy and explicit for a non-porn film, but they function as character development, not titillation, demonstrating how completely Adèle commits to her love and the freedom and authenticity she finds in it. They may also reveal some envy on the director’s part—not womb envy, exactly, since what distinguishes Adèle isn’t her fertility, but the belief, expressed by Tiresias, the Greek mythological figure, and quoted by a friend of Emma’s, that “women get nine times more pleasure than men” out of sex.

One of Adèle’s most endearing traits is how completely she trusts her own instincts, resisting fads and social pressure to commit to whatever she loves, from eating to teaching preschoolers. That unfettered intensity comes out with the greatest tenderness and ferocity in her lovemaking, and her long, ecstatic shared orgasms with Emma are a pointed contrast to the one scene we see of her making love to a man, in which her young lover climaxes quickly and then stops, leaving her unsatisfied and alone.

Kechiche takes his time too, giving his film three hours to “breathe,” as he put it at the Q&A after the press screening—where he also said that he plans to add 40 minutes more to the final cut. But except when the director spells out a theme a little too literally, foreshadowing Adèle and Emma’s meeting with a discussion in Adèle’s class of an 18th-century novel that, as Adèle says later, really “puts us inside the skin” of its heroine, the film never feels padded or tiresome. Other scenes that feel a bit over-determined at first, like the meet-the-parents dinner with Adèle’s parents that is a too-neat mirror opposite of the one they just shared with Emma’s, redeem themselves by building on the symphonic emotional arc that is this movie’s backbone, the actresses’ nuanced reactions telling us more about the love that is keeping this couple together and the forces that are pulling them apart.

As he did in The Secret of the Grain, Kechiche uses cooking and eating as keys to character and relationships. One of his central metaphors is the delicious-looking spaghetti Adèle’s father slurps up as the family eats silently in front of the TV. It’s a marker the director circles back to again and again as a symbol of the divide that ultimately separates the working-class Adèle from her effete artist lover, who appreciates the simplicity of the pasta, but ultimately prefers raw oysters.

An Essential Entry in the Up-All-Night Canon: Dazed and Confused Turns 20