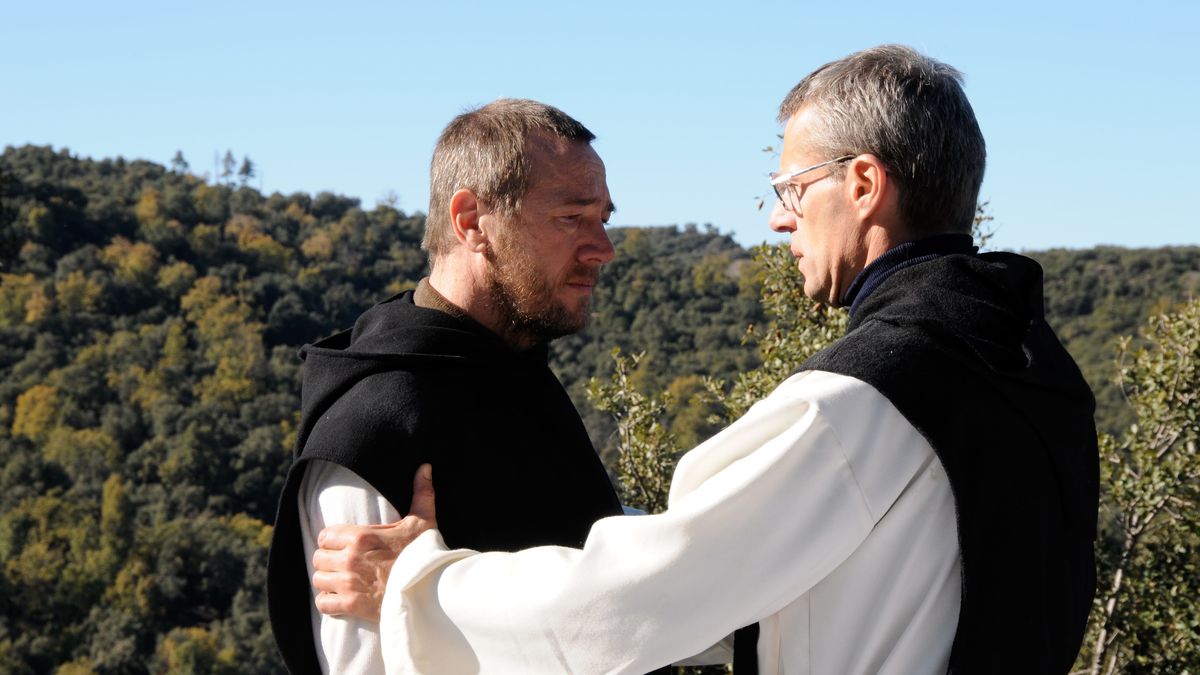 I walked out of Of Gods and Men convinced I hadn’t liked it. It was my second movie of the day, and I walked to the subway, eager to forget it on my way to a third.

Another critic approached me. “What’d you think?”

“I thought it was very static,” I said, as we stepped onto the train. “Xavier Beauvois has no idea how to cut on action, so that it’s just a lurch from one still composition to another.”

“I thought the depth of field was amazing.”

“That’s true.” I thought about all the scenes in which a group of monks, the film’s main characters, sing, or talk, or serve themselves french fries, and about how Beauvois continually photographs them in clear, clean 35mm long shots that keep everything in focus, but how he also falls into the widescreen trap of putting a person in the center of the frame with lots of empty (boring) space on either side. Then I thought about how he did the same silly thing in his last film, Le Petite Lieutenant, a pretty good cop movie with a kick-ass Nathalie Baye performance, but in which the screen often felt a little bare and in which new shots always began three frames too soon.

My colleague said, baffled, “People claimed that it looked like it was made for television.”

“That isn’t true,” I said quickly. Certainly the movie confines itself to a few rooms around the monastery, but that simply reflects how the French monks have chosen to close themselves off from the Algeria around them. It’s an Algeria in which they look outdated and not-belonging and in which Muslim terrorists are charging toward the door.

“Like you think about that scene toward the end, where they’re all listening to Swan Lake,” my colleague said. “Just a gorgeous scene. And the way that he shows each of their faces.”

“And it’s important that he gives each of the eight guys a close-up,” I said. “Because although they’re all willing to risk being attacked by terrorists together, each man has individually made the choice to stay. It’s very existential that way.”

My colleague said that that was the one thing that bothered him about the movie, that it focused too much on the monks in their solitude and didn’t make an effort to show them relating to the outer world.

“That’s interesting,” I said. “Because you have that scene where the Muslim politician says that French colonialism’s to blame for the presence of the extremists, and he’s right. But even though you see some of the violence, the terrorists remain an abstract threat. The focus isn’t what’s threatening the monks, but the fact that they’re being threatened. Whether to stay becomes the drama. The movie’s really about faith.”

My colleague then said that the film’s formal strategy was a way to test the audience’s faith, to see how long people would stick with shots in which the drama was distilled, in which the drama was actually whether you’d keep watching at all. Then I said that Rossellini and Dreyer used to do stuff like that, pseudo-objective long shots that let you observe behavior without the filmmaker judging it, but I thought that Beauvois didn’t have Rossellini’s eye for detail nor Dreyer’s control. And we kept talking more, and making other references, until the train reached 34th Street and my colleague got off.

On my own, I discovered that I liked the movie more than I thought I had. I considered Bakhtin’s opinion that people form their beliefs in conversation with each other, and decided that that’s something critics should do. But I still thought that Lambert Wilson was a dull actor, and that the cuts were too slow, and that the movie attacked the institutions the monks represented a few times, but really didn’t interrogate them enough to defend the point of staying. To focus on the monks in conference is to bleach out their surroundings. The film would work much better if it made more of an effort to put the monks up against the outer world because one of the film’s chief questions is what use religion has in a world that doesn’t want it.

And then I thought, as I got out of the train at Houston, that the film was saying that though a society may not require religion, individuals might, and if it gives them strength and purpose, bravo. Though they would likely call it their way of serving God, the monks decide that the best way to serve others is to let themselves be killed. Maybe that’s true, but I’d like to think otherwise. Regardless, the movie respects the monks’ position, and the formal choices reflect that respect. The resulting text is coherent, and stimulating, and even sometimes moving, though I still wanted more from it—other voices, and stronger ones. These gods and men weren’t enough.

The 48th New York Film festival runs from September 24 to October 10. For a complete schedule, including ticketing information, click here.

Review: Let Me In