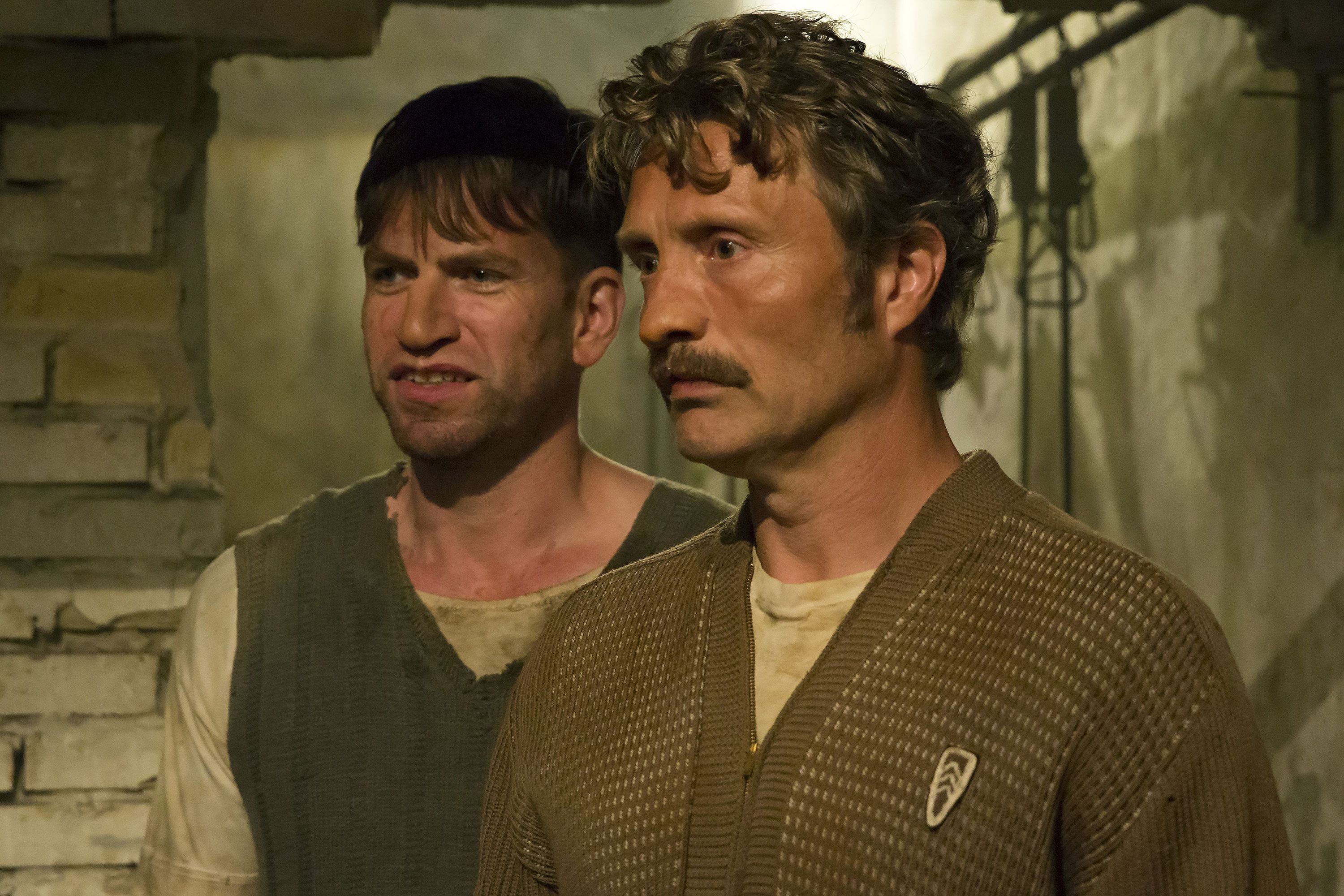 Anders Thomas Jensen’s Men & Chicken is informed by a weirdly touching sense of shock-tactic decency, mixing bestiality, fantasy, and coming-of-age family farce together into something that suggests what might happen if the Farrelly brothers attempted a Danish remake of Island of the Lost Souls.

Gabriel (David Dencik) and Elias (Mads Mikkelsen) are misfit brothers united by a cleft lip, a resentment of one another (Gabriel often gags when Elias is mentioned), and an all-around estrangement from society. Like the Farrellys, Jensen doesn’t entirely sentimentalize these outcasts: Gabriel and especially Elias are rather unpleasant, driven by their loneliness in a self-perpetuating, chicken-and-egg cycle of melancholia. When we first see Elias, we learn that he’s out with a woman because she’s a psychiatrist, so he can try to nab free therapy. When his date chafes at this proposal, Elias desperately chastises her for being in a wheelchair, then rushes off to feverishly masturbate.

One of the film’s chief pleasures, though, is the fashion with which it unexpectedly expands in the second act, from a duet between Gabriel and Elias to a group comedy. For reasons that don’t bear ruining, Gabriel and Elias discover they have a bunch of half-brothers living in a condemnable estate somewhere on a remote island, who’re played by Nikolaj Lie Kaas, Søren Malling, and Nicolas Bro with a sharp, poignant, and humorous emotional ferocity that’s syncs with Dencik and Mikkelsen’s own inventive energies. The brothers wander the estate bickering, dueling with stuffed animals (a recurring bit that’s funnier than it sounds), and attempting to solve the riddles of their ancestry. Hint: Men & Chicken isn’t an entirely figurative title.

Jensen informs these scenes with a gritty visual texture that’s more traditionally associated with dramas than comedies (the filmmaker wrote or co-wrote the screenplays for many modern landmark Danish films, the most prominent of which were directed by Susanne Bier). The mansion is vividly gone to seed, suggesting Miss Havisham’s residence, with its mixture of lavishness and perversity. Chambers that were once grand dining rooms and bedrooms are collapsing, used as pens for farm animals that are either eerily over-sized or sporting limbs belonging to other species. One image is memorably uncanny: of a dead woman entombed in a makeshift coffin/test tube, her visage suggesting a daguerreotype of a ghost.

Men & Chicken is an admirably bizarre and beautiful genre mixtape, but Jensen’s empathy for his characters gradually impedes his imagination. The jokes dry up somewhere in the second half of the film, leaving a mystery with an answer that’s telegraphed far ahead of its reveal, stranding the characters with little to do. Jensen has an unusual, almost commendable problem: He likes his characters too much to put them through the wringer of farce or even horror, eventually leaving them stuck in a no-man’s-land of tepidness.