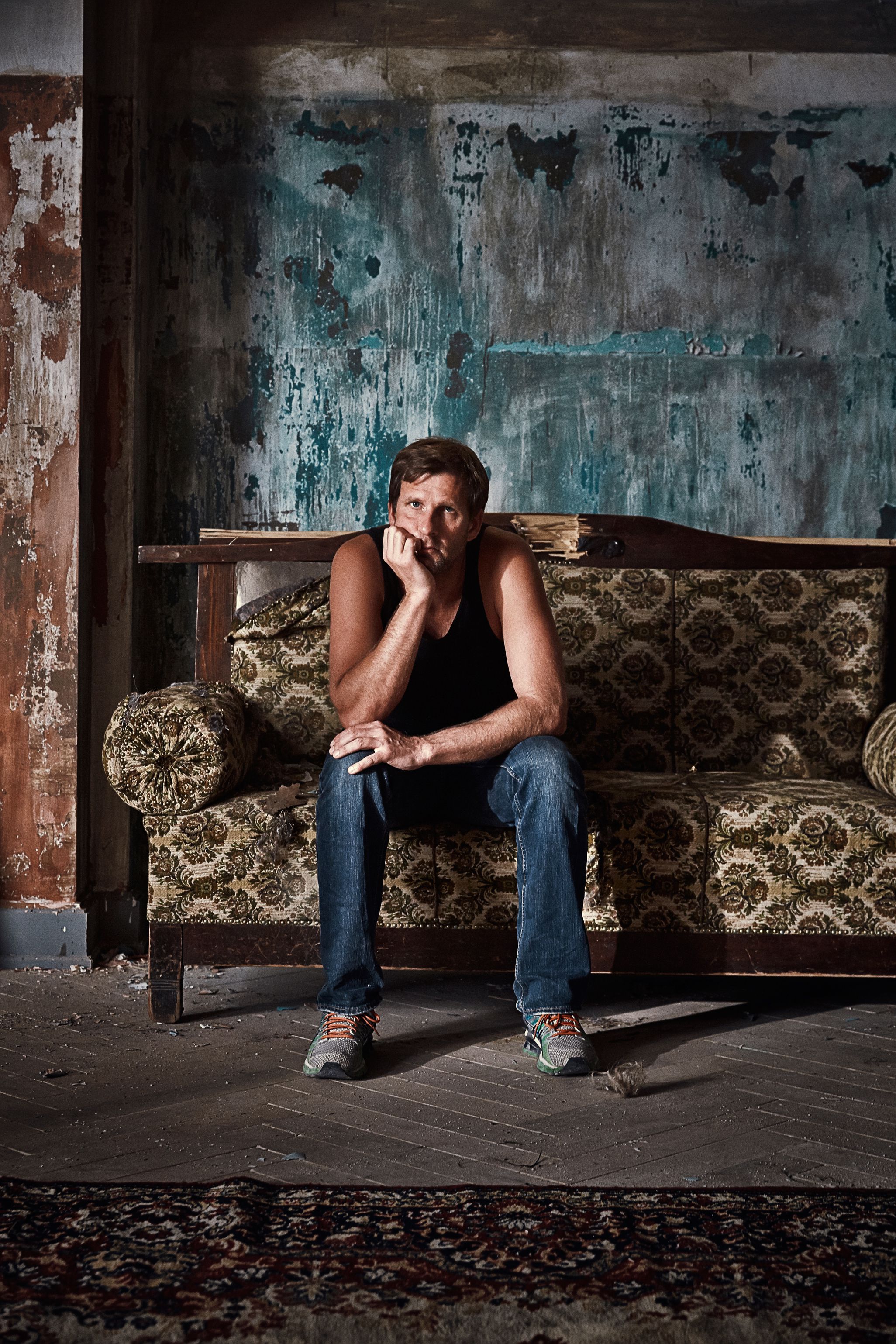 For 10 years, Anders Thomas Jensen put his directing career on hold. After all, raising four kids and writing almost 20 scripts for other filmmakers doesn’t leave one with much free time. A decade after the release of his award-winning Adam’s Apples, Men & Chicken arrives to remind us of Jensen’s gift for crafting meticulous worlds filled with outrageous black humor, enlightening and often biblical allegory, and tortured characters. In the film, the writer of such acclaimed dramas as After the Wedding, In a Better World, Red Road, and Brothers, investigates the knotty and perverse family tree that two troubled, dysfunctional, eccentric brothers living on a remote Danish island belong to. The film, which our own Chuck Bowen aptly described as “an admirably bizarre and beautiful genre mixtape,” reminds us of Jensen’s almost singular ability to at once repulse and amuse us at almost every turn. Not for nothing has been called the Danish equivalent of the Farrelly brothers. And on the eve of the film’s stateside release, I sat down to talk with the filmmaker about that singular approach, as well as the usefulness of family, Mads Mikkelsen’s genius, and why it’s a great time to be a Dane.

It’s been a decade since you directed your last film, Adam’s Apples. A lot has changed in your life since then. In what way has your view of the world and your approach to filmmaking changed?

I think I’ve become more self-conscious about the way I work with structure. I’m very much aware of what I’m doing, which is both good and bad. It gets more mechanical and intuitive after being in the business for years. At the moment I’m trying to stay focused, but still quite “unaware” of the act of making movies. Fifteen years ago I’d just come to the set and direct without thinking too much. In time, I got a little cynical about it. I caught myself observing a scene, thinking almost immediately: “I’ve done this scene before!”

Have you ever felt the pressure to direct something at least as good as Adam’s Apples before thinking of Men & Chicken?

Ah, expectations! That’s hard. These days, I’m all about making movies. I can’t be bothered with pressure and expectations. I’m doing it for myself and my family. After Adam’s Apples, I had four kids. I’ve become a family man. That puts things in a perspective. These days I just think that people may love or hate my films, but I know it shouldn’t affect me. I’d like to have an audience though. I hope I do. But I try not to think too much about what people may or may not expect. That’s a dead end for any director or screenwriter.

The films you work on seem to share a few features. They’re all very complex and meticulously planned. They often unfold from something that on paper looks like a comedy or dark comedy, but later develops into something more conventionally dramatic.

I usually want to make films in which I embrace all genres. I like stories which play with the idea of genre. I need to check if I can mix slapstick with horror, drama and comedy, every time. Finding the right balance is the key. The ideas behind Men & Chicken came paradoxically from my children as I watched them play, realizing how fragile our civilization is. [laughs] As a family, as society in general, we have to work on so many levels to make all of this work properly. One day, I just thought about what would the consequences be if I let my children go live on some remote island all by themselves for 10 years or so? That’s where the original spark for the story came from.

How does Mads Mikkelsen fit in your scheme of making films?

We’ve had a long relationship, and we’ve known each other for more than 15 years now, so he’s a true friend. I think he’s the quintessence of an actor—one of those few people I know who take responsibility for the whole film, not just for his own work. Mads is very concentrated and focused all the time, and extremely precise. He just does what he’s asked to do and much more. That’s the way it is: He appears and the job is done. The perfect actor. You don’t even have to do two takes, because he’d just do the same thing again. That’s how precise he is. Subtle, and very “directable.” I think it might be so because he has his past as a dancer, so he’s not new to being choreographed. He always stays in control of his movement.

You said that you had certain actors and themes in mind when thinking of Men & Chicken. How did their characters change from the story’s inception to the final product?

There were a lot of rehearsals. I write first drafts of scripts quite quickly, even before the whole structure is in place. After I had it for Men & Chicken, I sent it to the actors, then we met and exchanged opinions on all aspects of the story. These are usually very creative meetings, because afterward I have a lot of new ideas. Then I did more rewrites, more work, more meetings. It’s a long and complicated process. I enjoy bringing in the actors on an early stage. It’s always a collaboration.

But then, when we’re already on set, I never change a thing. A line at most. Time is so precious once you’re shooting that there’s very little time to do anything else than what’s required in order to finish the movie. It took eight weeks to shoot Men & Chicken and that’s not a long time. To plan even those short eight weeks with such a cast was quite difficult, because everyone had their plans, and many of them are household names now. It’s crazy how logistical it is to get things done in the movie business.

You took a long break from directing, but you kept busy writing for other people. On what grounds do you decide that you want to write something for someone else? How do you decide who to give your brainchild to?

Sometimes I just know right away. If you know someone well enough, you know what should be suitable for whom. I sometimes joke about directing stories that nobody else wants to do. Men & Chicken isn’t an easy sell. To pitch it to anyone is just a nightmare because it’s not something you’ve ever seen before.

You mix humor and drama into your films both effortlessly and unpredictably. Can you speak to that balancing of the two extremities?

I think it’s very much in the Danish mentality, one of the few things that Denmark can be proud of. Humor exists in every aspect of our lives, at least in my circle of friends and family it works that way. Nothing is just serious or just fun. It all has to play together. Bragging about anything is considered very “un-Danish.” If you brag, somebody will bring you down a peg in an instant. In America, it’s completely different: One day you’d say that you want to be this and that, or what your biggest dream in life is. You’d never say anything like that in Denmark. We don’t share dreams or aspirations with people. If you mentioned anything like that in public, a joke about it would usually come up immediately. We’re very well grounded.

Denmark may be small, but there are so many great actors and directors there: Vinterberg, Bier, von Trier, Refn, Coster-Waldau, Thomsen. Do you often meet to talk and exchange experiences?

All the time, actually. That’s one of the biggest strengths of the Danish film industry. We talk a lot. But it wasn’t always so. When I was starting in the movie business, the generation before me were just pure competitors. Everybody worked on their own. Lars von Trier was actually one the first to share his ideas. My generation understands that if there’s one Danish movie that does well, then it’s good for others. We’re an integrated unit. I think that differentiates us from other filmmaking nations.

Are you going to make us wait another 10 years for your next movie?

No, I hope not. [laughs] I moved to Los Angeles recently, and it’s a nice breath of fresh air. Currently I’m doing rewrites for The Dark Tower, based on Stephen King’s novel and which Nikolaj Arcelis directing. Soon I’m hoping to begin with my own project. I truly feel that you can tell a good story anywhere. Adventure is around the corner.

Review: A Hologram for the King