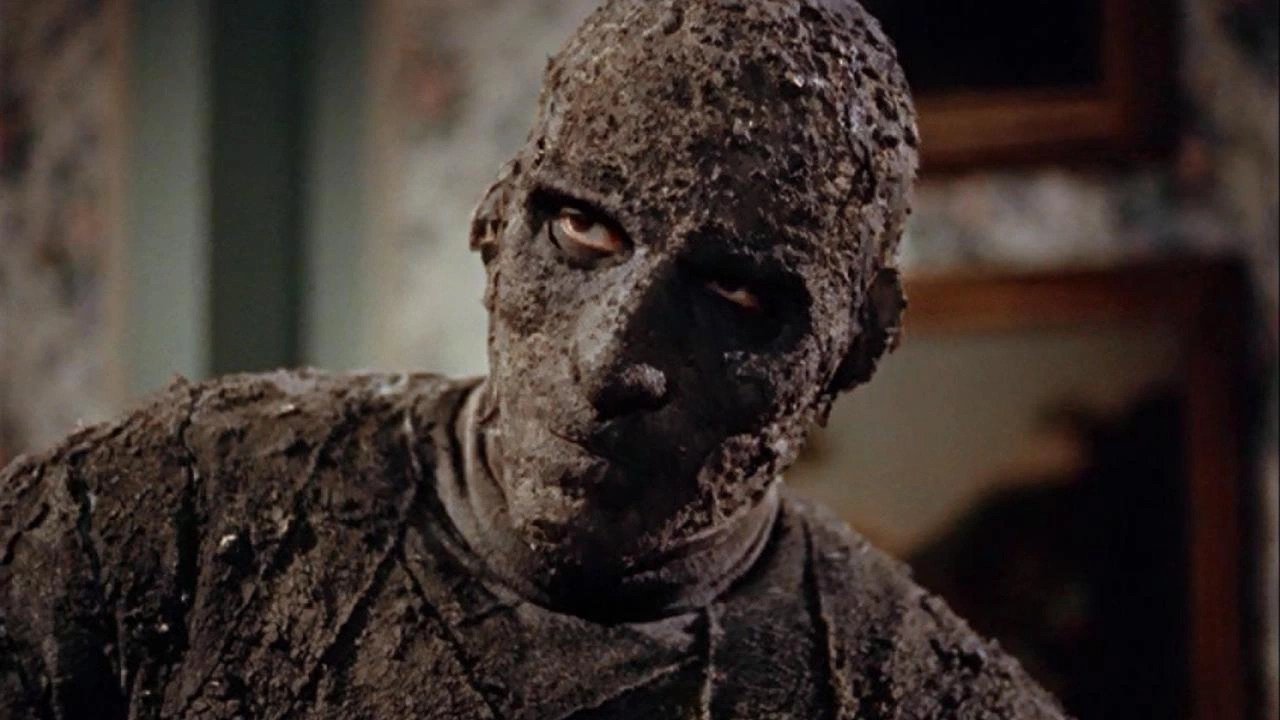 He’s roughly a few thousand years old and still a hopeless romantic…or a tana leaf junkie, depending on who you ask. His obsession with the lovely Princess Ananka goes way back. He was sentenced to eternal damnation for trying to reverse Ananka’s death. For this, his tongue was cut out and he was entombed alive, to guard Ananka. That the priests would assign the protection of Ananka’s tomb to a fellow that was bent on violating it seems odd. Odder still is that the confused and miniscule cult of Ananka that remained after her for thousands of years would be headed by priests that were intent on having an eternal version of her for themselves. From about 1940-48—the prime years for mummy movies—if you were a young woman who, through coincidence, was the spitting image of Princess Ananka and happened to be near the Universal lot, chances were that you would end up on the sacrificial table of one of these looney birds. Of course, interpretation of what Princess Ananka might look like tended to vary. In The Mummy’s Tomb (1942) the High Priest of Karnak, Mehemet Bey (Turhan Bey), mistook a blonde knockout, Elyse Knox, for the Princess incarnate and had her placed upon his table for an eternal dose of tana leaves. Fez capped Professor Andoheb, the High Priest of Karnak in The Mummy’s Hand (1940), saw brunette beauty Peggy Moran as the new Princess and subsequently had her strapped to his table for a dose of the tana. Yousef Bey (John Carradine), the priest designate in The Mummy’s Ghost (1944), thought luscious Ramsay Aimes looked like Ananka. From this pattern one thing becomes clear: Princess Ananka was hot. But beyond that there is no resemblance between these women. There is, however, a consistency in the priests. To a man they used Kharis as their own personal servant, sending him to snatch the nearest girl who even remotely resembled Ananka.

Sadly, if it wasn’t the priest that was after the girl, then it was Kharis himself. Either way meant the girl, at some point, would be carried off by the bandaged bandit. His method for gal snatching was pretty standard – tried and true. He waited until the girl was in bed, asleep with the moon’s glow gently on her face and bosom. Then he hovered over her long enough for her to sense his shadow or possibly smell his foul ancient odors (no doubt his BO was less pleasant than smelling salts) and then he would drag her away somewhere. If the girlnapping was for the priest, Kharis brought her to some ramshackle altar with a carefully prepared table; if it was for himself, then the destination was some marshy swamp . Through the Universal years, the Ananka look-alike was generally a maiden. Under Hammer, she was married to Peter Cushing’s character, John Banning (incidentally, the best Banning in the business). With Christopher Lee’s Kharis, it would take a man like Peter Cushing to handle the gauzy beast. Lee’s Kharis, unlike the Universal mummies (Todd Tyler and Lon Chaney Jr.), was all about completing the task at hand. So what if Kharis was incapable of multitasking? In the Hammer film (The Mummy, 1959), at least, he knew that the shortest distance between two points was a straight line. When Lee’s Kharis entered a room, he never dicked around but headed straightway to his victim and strangled the poor schmuck with due haste.

No offence to Dick Foran, but the Kharis he faced was more the rambling type of mummy—a mummy more interested in his next tana fix than in seeing a job through. At points in the Mummy’s Hand, I was thinking it was time for an intervention by the rest of the cast. When Kharis was lying on the dirty floor trying to lick up the remains of some spilt tana juice, I was actually embarrassed for the poor bastard. Although Kharis was a menacing figure roaming the set in the Mummy’s….Hand, Tomb, Ghost and Curse, it was still a slow progression. Whether it was Tyler or Lon Chaney Jr. dragging his gimp leg, that leg was still slowing him down. Christopher Lee’s gimp leg never prevented him from lumbering briskly along so that he could kill efficiently. If there was a wall or door between him and his target, Lee burst right through it as though it were a trifle. Asylum bars were torn way like taffy. Lee’s Kharis brought determination front and center.

Regardless of who played Kharis, one thing was consistent: he never went down without a fight – and, when he did finally go down, it was often in flames. No kidding. Those bandages that he wore lit up faster than a cheap pair of pajamas. You would almost think that, out of a sense of studio efficiency, Universal would have had its townspeople use Kharis as a torch to hunt down Frankenstein’s monster. Instead, the townspeople surrounded him in The Mummy’s Tomb herded him to a second story balcony in some New England home and set it ablaze so that he could display an agonized ignorance of the stop, drop and roll. Statistics show that two out of five Kharises end up in flames. Another two end up going into a swamp. Christopher Lee’s Kharis was shot down trying to bring a pretty Ananka into the water with him. In The Mummy’s Ghost, Chaney’s Kharis successfully brought his Ananka to a swamp. And it was not ordinary swamp. As the climax of Ghost, the swamp was somewhere in New England (so far as I could tell). Upon the next movie, The Mummy’s Curse (1944), the swamp was somewhere down south. No wonder Kharis never appeared to know where he was or what he was doing. By the finale of the Curse, he fell, Samson style, beneath some misplaced Grecian-looking ruin.

Jeffrey Hill is the art director for The House Next Door and the publisher of Liverputty.

5 for the Day: Jennifer Jason Leigh